You won’t find anything new in Realms of Revelation, but hey, that’s Dragon Quest. 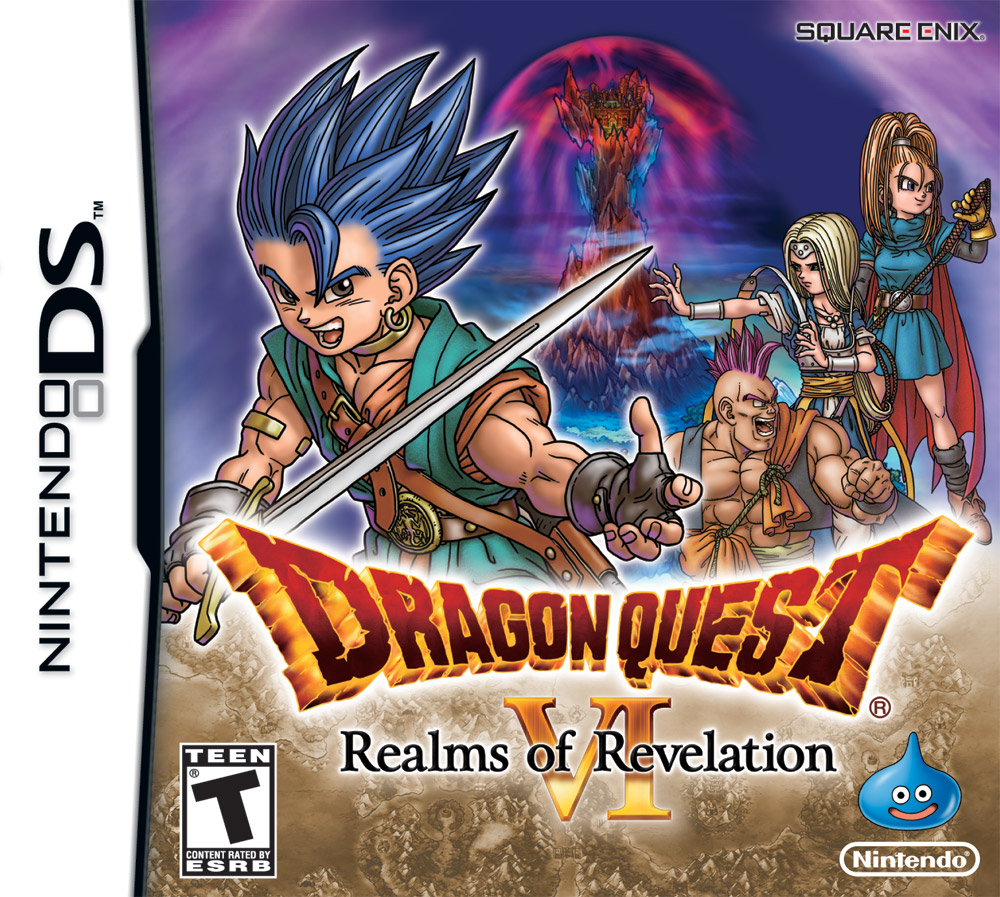 There were two Dragon Quest main series games that never came out in the US on their original platforms: Dragon Quest V and Dragon Quest VI. Both games were part of the Zenithian trilogy that also included Dragon Quest IV. A few years back, Square Enix decided to revamp the trilogy and remake Dragon Quest IV, V, and VI for the Nintendo DS. Now that trilogy has come to an end with the release of Dragon Quest VI: Realms of Revelation. So how does it stack up to the other installments? Read on.

Life is But a Dream

Dragon Quest VI opens with the hero (yours to name) and two companions raiding the fortress of the evil Murdaw, terror of the land. After a brief flight on a Dragon, you reach the fiend’s castle and bust in on his throne room. Unfortunately, he immediately turns you and your companions to stone and you wake up in the village of Weaver’s Peak to your sister’s urging. From there on, the hero and a potentially large group of companions must discover the secrets of their world, as well as if Murdaw was a dream or not.

For a Dragon Quest plot, Realms of Revelation does try to innovate, but that is like saying the H3 is novel for a Hummer. The hero and his companions will visit three different worlds, mediate between them to an extent and, without giving away too much of the story, discover their real selves in the process. However, in the context of contemporary RPG storytelling, Dragon Quest VI is riddled with clichés and lackluster dialogue. Even the series’ hallmark of giving life to NPCs using different accents is sadly threadbare. But then again, if you’re playing Dragon Quest for the story, you’re missing the point.

In terms of gameplay, Dragon Quest VI sticks close to the series’ standards: turn based battles, experience-based level progression, and the ability to buy weapons/armor/items in shops. But Realms of Revelation’s gameplay beats out that of IV and V for two reasons: jobs and vehicles. I love me a good job system and, after having played Dragon Quest IX, it’s nice to have one where you don’t lose most of your abilities when you change classes. Job advancement is based solely on number of battles fought, and even the highest-tier careers can be mastered with about an hour of grinding and the Whistle ability.

There are some mini-games to play — including the only slime-themed version of curling of which I am aware and a fashion contest — but they aren’t time sinks at all, unless you really need the Flail of Destruction or Metal King Armor from the casino.

I should note that the wireless features in this installment are minimal — somewhat akin to the Street Pass on the 3DS — and don’t completely negate your ability to collect everything in the game. I think this is wonderful, seeing as how I never use the features anyway, and don’t have 20 friends who also own the game.

The graphics in Dragon Quest VI are on par with those in the DS versions of IV and V, with sprite-based characters and polygon environments. There’s plenty of color and subtle changes to the different worlds’ environments that reflect their character nicely, but none of it is particularly impressive. I do like the detail put into enemy animations during battle, but otherwise, nothing really stands out.

The Music of the Night(mare)

From a composition standpoint, I always found Dragon Quest VIs score to be one of the weaker of the series. With the exception of the fully orchestrated opening fanfare, no track carries any emotional weight and I think it was at this point in his career that composer Koichi Sugiyama started becoming the crotchety old man who wants all those notes to get off his lawn. That’s not to say that the tracks don’t fit the environments, just that they have no soul and I spent most of the game with the volume turned off.

Gently Down the Stream

Controls function fine. There is no option to use the stylus, which is just as well, since theres no need to use it. I would have liked to have use of L and R as extra “confirm” buttons, ala IX, but no real loss there.

If you’re a Dragon Quest fan, you’ll pick this up regardless of my review, especially if you’ve never played the game in any other form before. If you’re new to the series, start with IV, as it is a far superior game in terms of storytelling and overall enjoyment. Bottom Line: you won’t find anything new in Realms of Revelation, but hey, that’s Dragon Quest.

If you've played any Dragon Quest game, you've pretty much played this.