Dragon Quest VII: Fragments of the Forgotten Past

It's overall narrative is bland and boring, giving you main characters who never truly develop into people worth caring about. Sometimes, though, it's about the journey rather than the destination. And what a journey it is! 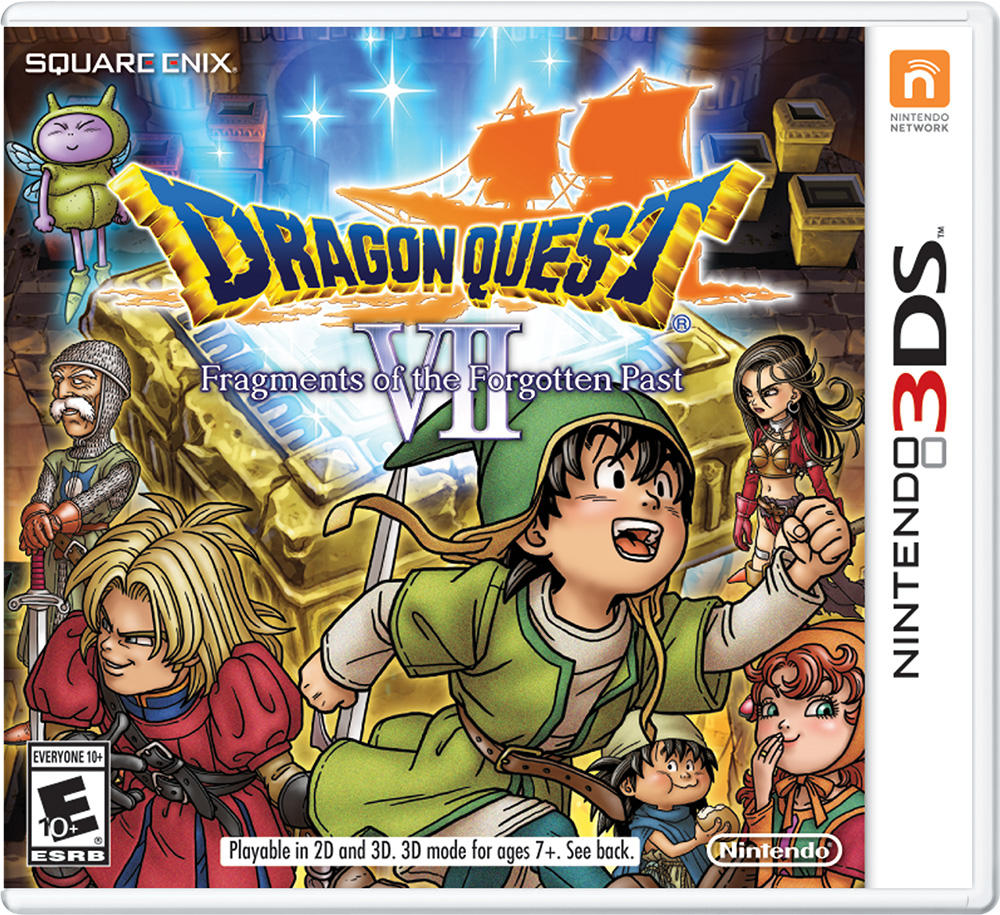 There’s something about a grand adventure that captivates me. The first book I remember reading as a kid is Treasure Island, and since then, I’ve developed a fondness for romanticized tales of heroes and their exploits. That’s exactly what Dragon Quest VII: Fragments of the Forgotten Past offers in terms of plot: no more, no less. Its overall narrative is bland and boring, giving you main characters who never truly develop into people worth caring about. Sometimes, though, it’s about the journey rather than the destination. And what a journey it is!

The game tasks you and your two plucky friends with literally building the world from the ground up by collecting fragments of magical tablets, and then going back in time to help solve a continent’s woes. At the start of the game, every continent but your own has been sealed off by The Demon King. By the end, you’ll see that your exploits have created an entire planet. Each continent has its own dialect and there’s just enough variety in scenery to make it feel as if these are truly different places that make up a larger, more expansive world. The payoff of freeing these continents from evil is a great one, especially when you can visit them in the present at your leisure.

Though it may feature a lackluster plot in and of itself, the individual story of each continent is told nicely. Visiting a continent and witnessing how evil has destroyed it is interesting, as every one has its own set of problems to deal with, and sometimes the outcome isn’t as happy as you would like. Throughout your adventure, you’ll encounter a town with its people turned entirely to stone, a town where people have become animals and vice versa, and even a town that’s at war with automatons. Smartly, these stories rarely carry over into the present timeline, meaning you’re effectively experiencing gameplay in “chunks.”

You’ll appreciate this design not only because you’re playing on a handheld, but because the game is absolutely massive. My playthrough clocked in at 65+ hours, and while fat has been trimmed in this remake (unnecessary puzzles have been removed, for example, and the amount of battles required to level up your class has been reduced), it’s still a long adventure. Being able to play through it in small sessions benefits you greatly. Couple in the monster collecting system — which eventually gives you the ability to get randomly generated dungeons — and the casino, and you have a great deal worth of content.

The game has simple turn-based combat that every RPG fan is used to. About 20 hours into the game, however, you unlock an extensively detailed class system. On top of leveling up your character, you also have to level up these classes, known as “vocations.” Certain skills are specific to vocations, and mastering specific ones will grant you access to another. If you can master the dancer, troubadour, and jester vocations, you’ll unlock the luminary vocation; master it as well as both the priest and mage vocations, and you’ll then unlock the druid vocation. Unfortunately, this leads to a good deal of grinding if you aren’t strategic with mastering the right vocations, which can potentially be a drawback for some.

Fragments of the Forgotten Past is, without a doubt, absolutely charming. Unfortunately, that makes its flaws all the more obvious. This game has some of the most boring dungeon designs I’ve ever seen, and aside from a standout that messes with the third dimension, you’re just roaming through corridors and looking for a set of stairs. A few dungeons have slight puzzle elements, but this is not enough to make them stand out or feel like they’re of high quality. In addition to the bland overarching plot and the bland dungeons, there’s also the bland music. The tunes themselves are good, but the soundtrack isn’t memorable; the same tracks repeat so often that I felt as if I could count the number of songs featured in the game on one hand.

Even with repetitive music and uninspired dungeons, I couldn’t help but lose myself in the wacky world of this Dragon Quest title. The individual stories of the continents were compelling, and I constantly wanted to see what kind of story I’d be seeing next. And while the game is long, it never feels as if it overstays its welcome (even during a rather dull final act). Cutting down on padded gameplay elements with this remake really benefited the core game of this PSOne classic, as it’s a title I sincerely think all 3DS owners, RPG aficionados or otherwise, should add to their library.

Storytelling through vignettes that works perfect for a handheld, great world building, simple yet addictive combat, and a plethora of content.

Framerate frequently chugs with the 3D effect on, one-note characters, lack of a compelling overarching plot, and repetitive music.

With a lengthy adventure full of memorable story moments, Dragon Quest VII deserves a spot in every 3DS owner's library.