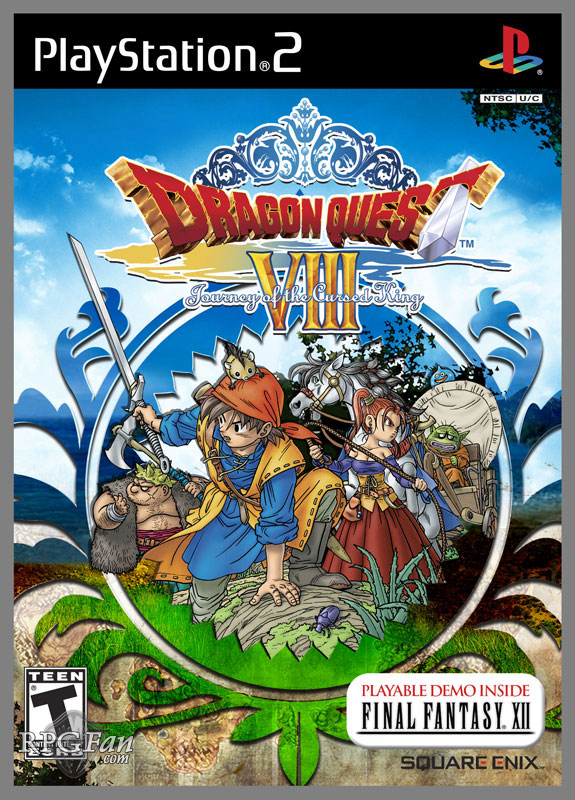 Although insanely popular in land of the rising sun, the Dragon Quest series has had a rocky history in the US. Popular in the US during the NES days, the long hiatus between games, as well as the non-release of Dragon Quest V and VI for the SNES, meant an almost decade long Dragon Quest dry spell. When US gamers finally got their hands on Dragon Quest VII they were surprised to find graphics and gameplay that felt admittedly dated at a time when games like Final Fantasy VII, Star Ocean 2, and Xenogears ruled supreme.

What many players failed to understand is that Dragon Quest games have always been about classic role-playing. A classic fantasy setting, a battle against good and evil, magic, dragons, friendship, and most of all- a sense of wonder as you explore the vast world around you. Dragon Quest VII might’ve failed to make a big splash due to its dated graphics, but what if the entire graphics engine is overhauled to give it detailed cel-shaded 3D textures?

That, in essense, is what Dragon Quest VIII pulls off, and magnificently so, if I might add. The graphics of Dragon Quest VIII are a sight to behold, with a huge game world, large dungeons, fully realized towns and castles, and most importantly, some of the best cel-shaded graphics in any game thus far with designs by the famous Akira Toriyama himself (of Dragon Ball fame!)

All the 4 characters you control in your journey are fully realized in beautiful cel-shaded 3-D textures that give them the full anime look. The characters also have tons of animations that range from attacking to even dancing during battle. What’s more is that the equipment you have on your characters affects his/her appearance during battle, with different texture for weapons and shields in the game. Different armor usually has no such visual affect, but there are some exceptions, and there is a fair bit of gameplay involved with playing dress up with the resident big breasted magic user. Should you equip her powerful magical clothing or a revealing bunny outfit? It’s all up to the player’s tastes.

This graphical treatment is extended to the monsters in Dragon Quest VIII as well. Each of the monsters are well animated and there are a lot of unique monsters that are both cool and humorous to look at. There are monsters that will combine in front of your eyes to become a supermonster ala Voltron, while others will put on a puppeteering show for your party to behold…then attack you while you’re entranced. All other textures in the game are non cel-shaded but their level of detail is some of the best on the PS2. What is really impressive about Dragon Quest VIII is how it gives players the feeling of scope in the world at all times. Due to the large size of the open world map and the expansive landscape, it is actually quite easy to get lost if you don’t keep to the roads and follow directions that you’re given. This goes a long way to reinforce the feeling of a truly epic quest that you and your party is in.

Speaking of which…the story. As mentioned before, Dragon Quest VIII is all about classic RPG goodness. The story reflects this to a great degree.

In this game you play a soldier traveling the world in order to hunt down a jester named Dolmageth who stole a magical staff from Troden castle. This powerful staff gives him power so immense that he turned the inhabitants of the castle to stone, save for the king and princess- who were polymorphed into a goblin and a horse, respectively. Along the way you’ll find three other companions united in their goal of stopping Dolmageth.

Okay, so the story itself isn’t something to turn heads. There are a number of nice twists thrown in later that I won’t reveal, but it is the type of story that has been done to death over the past 25 years. So why care?

You care because of the excellent characterization present in the game. The relatively small cast of core characters actually gives them a lot of time to grow and mature right in front of your eyes, thanks in part to the ability to talk to them at any time. Although there is no voice acting present in the game, the writing is very solid and there is a great deal of small talk in the game that is sure to amuse players. They will talk about things that range from what they must do next to progress their journey to even making jabs at each other. This core cast is backed up by a surprisingly large supporting cast, each with their own personalities and goals, all of whom make game feel so much more epic.

The epic nature of the game is also helped by the inclusion of a full day-night system. Each of the towns look different depending on when you go in them, and will also have people situated at different locations. The types of monsters that roam the wild will also change depending on the time of day as well. This, coupled with the feeling that time is progressing in the game, really makes it feel like your quest took months, perhaps even years to complete by the time you’re done.

One of the other things that will strike anyone who has played the older Dragon Quest games is how faithful it is to the old games while maintaining modern standards of the RPG genre. This is especially evident in Dragon Quest VIII’s battle system and sound effects.

Battles start out looking as if they were still the old 2D Dragon Quest games: with a 1st person view zoomed onto the monsters. However once the battle starts and you input the commands, the screen will zoom out and you’ll see characters slashing and hacking at the bad guys in full 3D glory. As characters slash away, you’ll hear the old NES sythesized sound effects pop, only to be quickly droned out by the new, higher quality effects. It is as if the entire game is designed to remind players of it’s long history as a game series and it does so without annoying players as they set about to accomplish their quest.

As for the battles themselves, they are the usual menu based battles that have been seen in pretty much every RPG. Yet there are two new additions to the traditional battle formula : skill points and the Tension system.

Skill points are doled out as characters gain levels and is the main way a player can customize characters. Unlike other games that implement similar systems, the skill points are used slightly differently in Dragon Quest VIII. It is only by investing in skill points in different areas that your characters can become proficient with certain weapons, and skill points also affect which special attacks and spells each characters will learn. This way, you can raise your hero to become sword wielding warrior, or even a skilled healer specializing in the boomerang. If you so wish, you can even have your magician use her sexiness as weapon, with humorous attacks such as ‘Sexy Beam’ and ‘Blow a Kiss’.

The Tension system pays an homage of sorts to Akira Toriyama’s Dragon Ball Z. During battle, each character can charge instead of attack, which will double the effectiveness of whatever they do the next turn, including boosting the effectiveness of spells. If you continue to charge turn after turn, your characters will eventually reach High Tension, where they’ll be able to deal a ton of damage. If they continue to charge even after they’ve reached High Tension status, you will reach Super High Tension where you’ll see a flaming glow surrounding the characters to denote their elite status. Of course, this process takes quite a long time and many of the bosses can lower your tension so it’s not quite the end all of all battles; but it is quite fun to play around with nevertheless.

There’s a lot to love about Dragon Quest. It has a 30+ hour quest, excellent music, fun casino games, the ability to convince monsters to join your party, hidden items and even multiple endings. The fact that the battles aren’t a pushover is also a big plus. Dragon Quest VIII may not revolutionize the console RPG genre, but it has done one thing that all the older RPGs have strived to be: it has become the greatest classic RPG experience of all time.