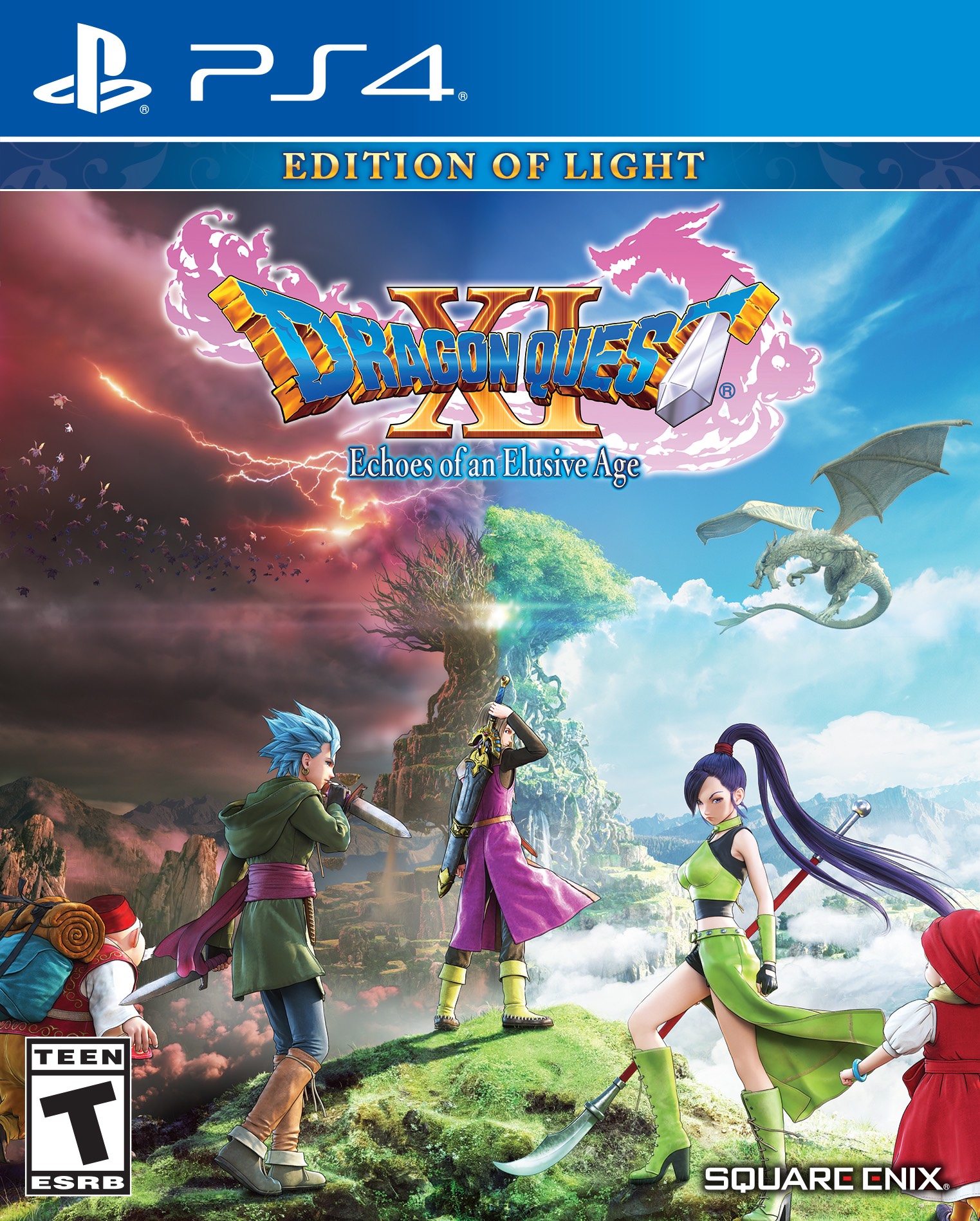 The hallmark of the Dragon Quest series is not just its steadfast adherence to the tried and true JRPG formula it fathered over three decades ago. The enduring success of this seminal series, particularly in Japan, can be ascribed to its consistency in execution in addition to the draw of nostalgia. Indeed, DQ embodies a mastery of JRPG design and implementation that only the forebear of the genre could hope to achieve. Dragon Quest XI: Echoes of an Elusive Age, the first entry in the series on a major console to reach the West in thirteen years, doubles down on these storied principles and ups the ante to deliver thoroughly sterling results.

In Dragon Quest XI: Echoes of an Elusive Age, Square Enix has delivered to us the grandest Dragon Quest of them all.

Echoes of an Elusive Age opens in the world of Erdrea, where a noteworthy birth spurs a devastating monster attack that forces mother and child to flee from the horrors ravaging their homeland. When the storms clear and the sun rises on a new day, an old fisherman discovers the newborn curiously floating downriver in a basket. Years pass, and after a tumultuous coming of age trial, our Hero discovers that he’s the reincarnation of the legendary warrior known as the Luminary. The Hero is promptly urged to visit the king of neighboring Heliodor with the news, but he receives a rather inauspicious welcome. Labeled the malevolent “Darkspawn,” the Hero spends much of the game hunted by those who believe him to be the harbinger of calamity.

The DQ series isn’t typically known for overly complex or thought-provoking tales. Their plots are generally by-the-numbers high fantasy fun, with solid stories brought to life by the worlds in which they’re set and the memorable characters populating them. Echoes of an Elusive Age embraces this same storytelling blueprint, though the scale at which it operates is massive in both plot and setting. Much like its predecessors, DQXI should be judged as a whole rather than as a sum of its individual parts. While each of these parts shine in their own way, the combination of it all makes DQXI truly something special.

The main narrative is immersive and engaging, with twists and turns that add just the right amount of spice to maintain player interest in the overarching “save the world from evil” plot line. A sprinkling of surprisingly poignant, emotional moments also add some much needed depth to the Hero’s cast of endearing yet clichéd companions. Although most of them have moderately interesting backstories, the feisty Veronica and rambunctious Slyvando (and perhaps Rab) are really the only ones with remotely standout personalities. Additionally, stereotypical portrayals of certain characters might rub some players the wrong way despite what appears to be a good faith characterization effort.

Any game with such an ambitiously large scale is bound to suffer from pacing issues, and DQXI is no exception. As the Hero and his companions traipse across an increasingly treacherous Erdrea, there are noticeable lulls in the plot that make the quest feel a bit rudderless at times. This seems mostly by design, as scouring the world for clues and unmasking the omnipotent evil threatening it are part of the game’s worldbuilding process. As one NPC notes, however, “every port is a story waiting to be told.” The world of Erdrea is full of wondrous locations and delightfully wacky denizens that are further enriched by a stellar localization overflowing with charming characters, risqué dialogue exchanges, and wonderfully weird humor. There’s a town where all of the inhabitants speak strictly in haiku form, for goodness’ sake. Needless to say, I spent well over 100 hours in this world and I thoroughly enjoyed every second of it.

Perhaps the most conspicuously traditional aspect of DQXI, or any DQ title for that matter, is its turn-based battle system. As with recent entries in the series, battles are triggered by coming into contact with enemy avatars roaming about the field. The party can comprise up to four members at a time, and each of them can be switched in and out mid-battle. Party members gain skill points each time they level up, and those points are pumped into the Character Builder skill grid to gain new abilities and spells associated with their compatible weapon types and unique character traits. It’s DQ’s standard system of progression that’s flexible enough to build to each character’s strengths yet unforgiving if you spread the points across too many branches. Each character can also enter a “pepped up” state where their attributes are supercharged, and if two or more of them are pepped up at the same time, you can unleash collaborative special techniques that range from kind of useless to extremely powerful.

An interesting yet misleading new wrinkle in the DQ battle formula is the addition of the “Free-Form Fighting” combat mode. The Free-Form moniker is a blatant misnomer, as it only enables the free movement of the camera and party members during battle but has no actual impact on combat. Although it seemed pointless at first, this mode quickly grew on me when I paired it with DQXI’s highly capable party tactics system, which determines AI-controlled character behavior. I leaned heavily on that tactics system through the entirety of my playthrough and found it made quick and efficient work of normal enemy encounters.

Erdrea is a sprawling world with a multitude of goodies secreted away in its various nooks and crannies, but DQXI is by no means an open-world game. It’s actually incredibly linear and quite obvious in its funneling of the player from location to location. Even so, that doesn’t detract from the joy I had searching every inch of its vast expanses and wilds teeming with life. The DQ series is known for quirky enemy actions in combat, but enemies also exhibit fun and interesting behaviors in the field as well. As the Hero gallops over a hilltop on his trusty steed, you’re as likely to come across a collection of frolicking cruelcumbers as you are a group of she-slimes marching behind a Bongo Drongo like the Pied Piper. The generous number of side quests, DQ’s patented casino games, the new Draconian Quest hard mode, and a deceptively complex crafting mini-game make it easy to wrack up a playtime in the triple digits. That doesn’t even include the meaty postgame content, which introduces an intriguing narrative mechanic that convincingly spurs players to continue the adventure.

Simply stated, Echoes of an Elusive Age is an absolutely gorgeous game. The character designs are textbook Akira Toriyama, and the anime aesthetic compliments the bright colors and high contrasts of the environments to create a majestic fantasy world that pops off the screen. The imposing cliffside castle of Heliodor overlooking rolling green hills at the outset of your adventure is but a taste of the incredible imagery and beautiful set pieces you’ll encounter along the way. The landscape is replete with scenic vistas and the remnants of shattered kingdoms that are further elevated by an impressive attention to detail, such as the intricate features of Hendrik’s ornate armor and the mysterious hieroglyphics that adorn the columns of the Sultan’s Palace in Gallopolis.

Musically, DQXI is a smorgasbord of classic mainstays from longtime series composer Koichi Sugiyama. It’s mostly solid overall, and while it’s not quite what fans of the series envisioned, it does include some great tracks that pair up well with the scenes and locations in which they occur. There’s an unmistakable lack of variety for a game of this size, however, and noticeable repetition is the first major ding on the sound score. The second is the unfortunate use of the original MIDI version of the soundtrack rather than the orchestrated version that actually comes packaged with the Edition of Lost Time version of the game. From the list of enhancements to DQXI’s Western release, the most notable addition may be the voice acting. The quality is unsurprisingly varied throughout, with fantastic performances intermixed with some very poor ones, and forced, awkward accents don’t help matters.

Dragon Quest creator Yuji Horii deemed DQXI the culmination of the series’ thirty years of tradition. I’m more than inclined to agree with him, as it embraces and enhances almost all of the virtues that make DQ such a beloved franchise. It remains unabashedly true to its roots as a JRPG fan’s JRPG, and fans of the series are in for a treat at a scale of epic proportions. The best DQ games embody the spirit of grand adventure. In Dragon Quest XI: Echoes of an Elusive Age, Square Enix has delivered to us the grandest Dragon Quest of them all.

DQXI is a fantastically fun romp through a gorgeous world that delivers on its promise of an epic, if conventional, JRPG adventure.