Dungeons & Dragons: Dark Alliance is a game with great promise but poor to mediocre performance, depending on your affinity for action-oriented loot hunting and patience for AI and other technical shortcomings that should have been nipped in beta. 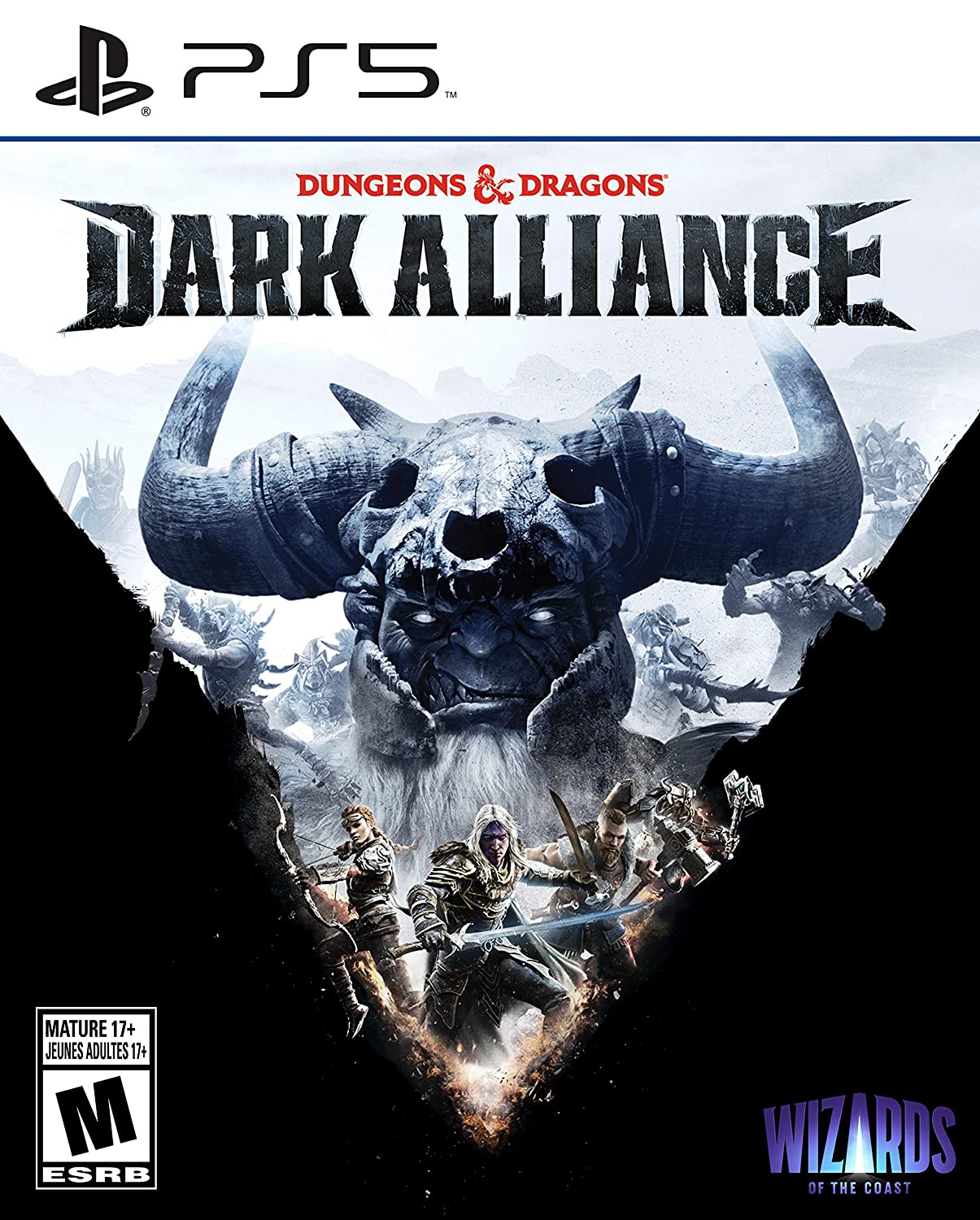 Playing out those dice rolls sometimes amounts to unadulterated fun. At its best, Dungeons & Dragons: Dark Alliance features some of the most addictive dungeon crawling this year, especially if you’ve got friends you plan to kill goblins, knolls, and trolls with online. But after a few hours in Icewind Dale, you’ll find braindead enemy AI and performance glitches that should have been addressed well before this game hit market mar most of the fun.

Dungeons & Dragons: Dark Alliance lets you and up to three friends play as heroes from R.A. Salvatore’s The Legend of Drizzt novels: Drizzt Do’Urden (a dual-wielding rogue),  Wulfgar (a maul-bearing barbarian), Catti-brie (a nimble ranger), and Bruenor Battlehammer (a tanky dwarven fighter). The plot tracks the first entry in the Icewind Dale trilogy and tasks our heroes with crushing the titular dark alliance: a horde of giants, dragons, and other baddies scouring Icewind Dale for a magical shard offering untold power.

This game’s narrative begins and ends there. Your heroes occasionally utter melodramatic one-liners, and some missions weave in cutscenes that flesh out the faction you’re fighting — or just decimated — in that particular tundra, mine, or frozen hellscape. But if you’re looking for complex moral dilemmas, plot twists, or anything more profound than the threadbare framing device this narrative amounts to, look elsewhere.

That’s because Dungeons & Dragons: Dark Alliance is an ARPG that puts the bulk of its weight on the action part of that label. This game is about fast-paced dungeon crawling and loot grinding, which is informed but not dictated by levels, stats, and other RPG mainstays. You can trigger light attacks (quick jabs), fierce attacks (powerful moves that take moments to execute), jumps, rolls, parries, blocks, and special abilities, all in real-time. All of this drains your stamina, which you can recharge by sitting still. Controls are intuitive and responsive, so whipping moves off on the fly comes naturally and feels fluid.

The game’s fast-paced combat may be disappointing to some D&D fans, but I’m here for it. There’s just something deeply satisfying about dashing into a horde of giants who can two-shot you, unloading a devastating fierce attack on them, narrowly evading their axes with a well-timed roll, and watching your friends tear the surviving beasts to shreds with explosive arrows. But it’s also because the game’s combat system is refreshingly complex and adaptable to player preference; your heroes possess a range of interesting offensive and defensive abilities that cater to different play styles. You can tinker with their stats and ability points to build them out however you like. This invigorating level of freedom is common among WRPGs, but it ought to be applauded nonetheless.

Dungeons & Dragons: Dark Alliance also features an intricate combo system that keeps combat engaging. Creatively weaving together light attacks, fierce attacks, jumps, and rolls will trigger one of your hero’s 50+ combos, which are vital to major battles and often downright addicting to land. Nailing these combos augments you with potent buffs and contributes to your ultimate meter, which, once full, lets you whip out glorious, game-changing abilities that saved me in many a pinch. Catti-brie’s ultimate, for example, briefly renders her almost invulnerable to damage and lets her sling humungous “arcane arrows” that pierce and unload scores of damage on hapless enemies in their path. Unfortunately, the game doesn’t incentivize you to venture beyond the few combos you’ll become most comfortable with, and no one particular combo is necessary to defeat even the most fearsome foes, and some are too impractical to pull off in the heat of battle.

The game’s loot system is also behind a lot of the fun you can have here. As you dispatch enemies, they drop weapons and armor, and collecting better and rarer loot is the name of the game. Fortunately, Tuque Games handles this aspect of Dungeons & Dragons: Dark Alliance pretty well. Nearly all equipment you come across will be part of a set, and complete sets offer significant bonuses that scale with the number of matching pieces you have equipped. You can go all-in on one set and maximize its rewards, or you can mix-and-match pieces to enjoy varying bonuses complimenting your desired playstyle. Players who enjoy the Diablo-esque serotonin rush of butchering screens full of baddies and experimenting with their ever-improving loot will feel at home.

But Tuque Games did make several limiting choices with its loot system that left me puzzled. For starters, equipment attributes and set bonuses unimaginatively amount to subtle increases to stats, resistances, and a few other metrics, and none of the equipment or set bonuses inch toward revolutionizing combat. And when you find new loot color-coded to an enticing rarity level, you can’t equip it or make any other loadout changes until you complete the mission and return to your base camp. So if you want to equip gear to support a different play style demanded by a group of monsters mid-dungeon, you’re out of luck.

You tackle this action-packed loot-hunting over 21 missions. Each mission takes 20-40 minutes to clear and can be run on six difficulty settings. The higher the difficulty, the rarer the loot. Though hardly unique, this structure lends the game replayability and keeps its pace even. Between missions, you can spend ability points earned by leveling up, buy new combos, and equip and upgrade equipment at your base camp, all of which you need to be thoughtful about if you hope to survive the more crushing difficulty settings. Each mission is linear, but the game sprinkles in mini-bosses and treasure off the beaten path, making the world feel alive and worth exploring.

This relatively rosy picture comes to a screeching halt once we arrive at the game’s enemy AI. It’s the most baffling I’ve ever encountered, and it often singlehandedly ruined the gameplay experience for me. Enemies commonly take several seconds to react to you, even if you’re pummeling them, and many won’t notice you unless you’re in their face. Worse yet, enemies will only battle you in a small radius around where you found them. So if you run, say, more than 30 feet from a goblin you’re fighting, he’ll abruptly about-face and scamper back to where you found him, even if you continually blast him with ranged attacks. You can actually snipe most monsters from a reasonable distance, and they’ll remain silently stationary as they meet their end.

These failings take most of the challenge and sense of achievement out of the game; if a fight’s proving too difficult, I know I can cheese it by running a few yards away and whittling my enemies down with ranged attacks. How this undercooked AI even survived beta testing raises serious questions about the QA process or the decision to release the game in this state.

The game’s performance on multiplayer is also abysmal. Lag constantly plagues multiplayer, regardless of how many friends you’re playing with or the strength of their connections. To boot, missions often suffer from glitches in multiplayer that prevent you from triggering objectives, and these force you to ditch your progress by restarting the mission or trying your hand at another. Though these failings didn’t break the multiplayer experience for me, they’re particularly disappointing because Dungeons & Dragons: Dark Alliance was designed to be played with friends, which is when it shines brightest.

Graphically, Dungeons & Dragons: Dark Alliance is a double-edged sword. Character and enemy designs are crisp and intricate, and the framerate always stayed smooth on PS5, even during frenetic fights. But the game lazily overrelies on a scant few sets of environments that quickly feel too familiar. And if you thought Final Fantasy VII Remake’s doors were bad, wait until you see some of the blurry PS3-quality environmental textures in store for you here. Battle animations also don’t always line up with hit detection, making combat sometimes look and feel floaty.

The game’s audio is mostly run of the mill and does little to help you look past its AI and performance deficiencies. The music is serviceable and suits the game’s tone, but the background and battle tunes fit the “generic high fantasy” moniker to a tee, and none of it is memorable. Battle sound effects are limited and, due to their repetition, grating. The voice acting is the saving grace that helps bring this storybook world to life — particularly the work behind the charming enemy banter you’ll overhear on missions, which had me laughing more than a few times.

Though Dungeons & Dragons: Dark Alliance offers an addictive combat system and rich character customization, it’s a tough sell until its AI and performance failings are patched out.