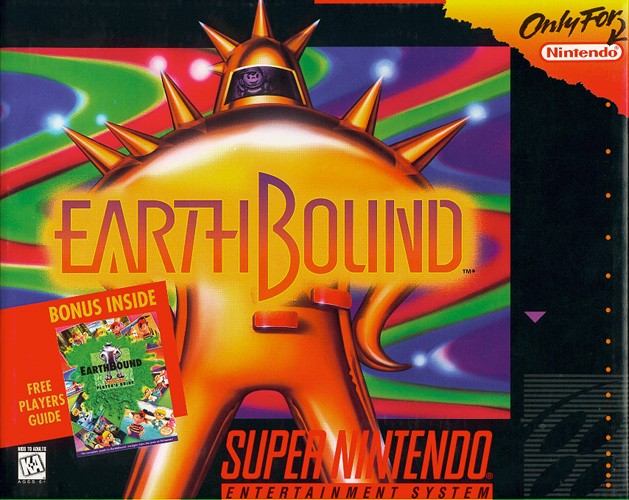 One of my favorite things in the whole, wide world to do is the following. First, head to Wawa, 7-11, the Quik-E-Mart, or any other local convenience store and purchase a gallon of chocolate milk and a box of Entenmann’s Original Recipe chocolate chip cookies. Then, devour both items on the car ride home. Finally, go to sleep (If you can), and if you’re lucky, you might just have a dream as entertaining and psychotic as EarthBound, the little game that stole my heart.

In the small town of Onett, there lived a young boy named Ness. This child enjoyed such hobbies as baseball, building tree houses, and psychic readings. Little happened in Onett, until one strange night when a comet fell from the sky and landed on top of the highest mountain in Onett. Ness was the only one who wasn’t terrified by the calamity, and he boldly scales the mountain, only to meet his chubby neighbor Pokey. Later that night, Pokey knocked on Ness’ door, asking him to help him find his brother Picky. Armed with an old Louisville slugger, an almost-faithful mutt, and a cowardly pile of lard for a sidekick, Ness began his search.

Alas, the town of Onett was a terrible place at night. Demonic crows and venomous snakes mercilessly assaulted the ragtag team, but Ness and Co. bravely bashed their foes onto the endangered species list. Finally, the brave young Picky was found near the comet, and all seems well… until an alien bee flew out of the glowing stone and began talking. Ness was informed of an evil extraterrestrial plot to conquer the world, led by an evil and mysterious entity called Gygas. Another alien suddenly appeared in order to assassinate the child and his new ally, but failed due to their combined might.

Ness brought Picky home to his parents before beginning his crusade for justice, but Picky’s mom smashed the bee against a wall, thus making Ness’ job much harder. All that the insect was able to give Ness in his last moments of life was a Sound Stone, which was somehow the key to saving Earth. Ness set out alone into the harsh world after saying goodbye to mom and dad, and his quest began…

Although some skin-deep RPG fans will recoil at the gameplay of EarthBound, any true blue RPGer will instantly realize that whoever made this game was either really screwed up or phenomenally genius. In any case, I thought EarthBound was fun. The battles are turn based, but that doesn’t make it normal. There are countless status effects you can get such as Nasty Cold (you sneeze every turn, which causes nose bleeds, and this causes damage), Sunburn, or even Mushroom (This is the worst fungal infection I have ever seen), but the list goes on and on.

The enemies never “Attack”. They “bite”, they “squeeze”, they “stink”, and they “run over with tank treads”, but they never attack. Reality goes flying out the window as a small child turns an 18-wheeler into scrap with a piece of wood, but that just makes it better! Movement on the overworld map reminded me of Secret of Mana, in which you walk around and see the enemies, move from one area to another without ever finding an overworld, and see all the characters at once. However, the game is not an action RPG, so Secret of Mana is probably a bad analogy.

In battle, your HP is shown on a slot machine dial, and when you are hit, this slowly rolls down the numbers until you’re dead, but that doesn’t mean you can’t fight in the meantime. In fact, if you heal yourself before that vital timer runs out, you can cheat death. There are countless items to be found, and all of them are innovative and bizarre. There are no mini games, but the actual game is very entertaining, has a decent challenge (Some of the normal enemies near the end are just plain sick), and has a phenomenal replay value. Madness makes the world go round, but it also gives Gameplay an 87%.

The characters, monsters, backgrounds, and dialogue are all made to look like a big cartoon. Everything is bright and colorful, and many scenes are humorous in a childish way. One of the most hated parts of the game, however, is that you cannot see your characters in battle, but I could not honestly care less about it. The enemies are put up on a psychedelic backdrop of lava-lamp-like proportions, and each one has a feeling that is expressed in the area and by the foes. There is some palette swapping, but it is usually accompanied by a change in the enemies’ appearance beyond a new color.

Spell effects are even more bizarre than the backgrounds, using bright lights and geometric designs in place of the realistic effects of most games. There is even a little scrapbook to see at the end of the game, reminding you of all those priceless moments you had (And there’s a lot of them, too), but perfecting the book requires much exploration. If you get bored of the way this game looks, please jab yourself in the arm with a pencil right now, because the Graphics get an 85%.

The music in EarthBound is some of the best I have ever heard. From the happy outdoors theme to the creepy alien-haunted-mall theme, I can remember tunes from EarthBound better than I can remember songs from the Final Fantasy series. Now that I think about it, I feel like I just blasphemed. Oh well. Square isn’t God. Anyway, EarthBound also had some decent sounds as well. Although nothing sounded like it was supposed to, there were explosions and electric shocks galore as well as flames and the thuds from blunt objects. Like the graphics, everything was over done and silly, but it still worked impeccably. Sound/Music gets a 90%.

The plot of EarthBound is by far the least coherent and most insane of any game I have ever played, and that made me love it all the more. Impossible coincidences, nonsensical characters, and enemies that were just plain strange all make this a great game. Although the plot is pretty easy to follow, there are several plot twists to keep you happy, but the best part of the game is by far the way that the story will completely leave a character in the middle of something to go on to something completely different in a very Python-like manner. In conclusion, nothing makes sense, everything does something, and anyone who has a problem with this is looking at it from the wrong angle. Storyline gets an 86% for originality, but please don’t try to figure out how the whole game works. You might hurt yourself.

Any RPGer who wants something new would be well advised to purchase this game, because it’s too long to rent. The amusing graphics, audio, and storyline all force you to keep playing, and the secret items and bonus areas will bring you back around at least once. Overall, EarthBound gets an 88%. Just don’t let anyone who helped make the game near any sharp objects.