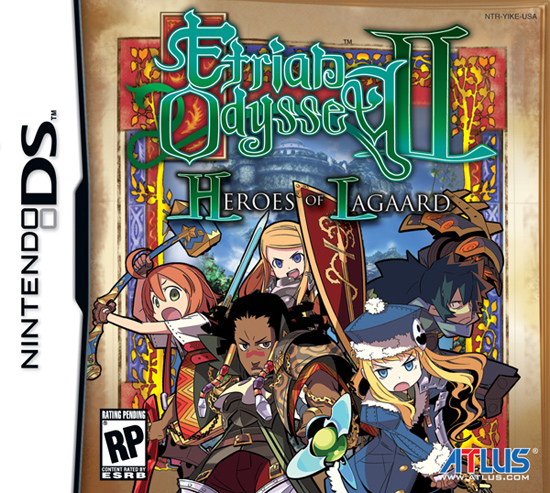 A little over a year ago, Atlus released Etrian Odyssey, a dungeon crawler that received little mainstream acclaim or fanfare. In the time since then, the unapologetically difficult level grinder has become a cult favorite to role playing fans, especially ones dedicated to the genre since the pen and paper days. Even though the first title did not sell well in North America, Atlus knew they had a potentially dynamic franchise on their hands and the result is a sequel given to fans very soon after the original. As a dedicated admirer of the original, I was skeptical of how and why a sequel needed to appear, especially considering the fact that some players are still stuck in the first dungeon. However, after completing my recent journey, it is safe to say that Etrian Odyssey II: Heroes of Lagaard whets the insatiable old school appetite while containing just enough innovative flair to bring players back for seconds.

Etrian Odyssey II opens in the Grand Duchy of High Lagaard, where a crisis has suddenly affected the Central City as well as the rest of the Northern Continent. This crisis eerily reminds the local villagers of a previous disaster in which the main civilization sunk and was destroyed, and only a floating castle remained. As a result, the floating castle becomes the key to unlocking the mystery behind both the previous disaster as well as the current situation that has struck Lagaard.

The High Lagaard’s Duke has been put in charge of researching the Labyrinth of Yggdrasil, which contains the passage to the castle and ultimately may reveal the secret behind the castle’s power. While doing so, the duke recruits people from all over the land to aid in his search. Adventurers set out on the dangerous quests because, in addition to power, the castle is said to contain the Grail of Kings–a magical cup full of life and fortune. Your guild is one of these groups of adventurers, and ultimately the one that unravels the secret behind Lagaard, Yggrdrasil, and the floating castle.

While this frame story to the dungeon hack may seem trite and unengaging (and it is to a large extent), it contains enough zest to keep the players interested in finishing the game. This is completely different from the original Etrian Odyssey, which included a marginal narrative and provided the player with almost no motivation to finish the main quest outside of sheer will and determination. In addition to the main story, Etrian Odyssey II contains more than 100 side quests that provide the player with more information surrounding the region of Lagaard.

Etrian Odyssey II does a brilliant job of taking the dynamic gameplay of the first installment and makes just enough changes to make it fun and original. For those who are unfamiliar, Etrian Odyssey is a dungeon hack that allows the player to physically map out the area by utilizing the bottom screen of the Nintendo DS handheld. For players who grew up in a generation of using grid paper to finish games such as Wizardry, Shining in the Darkness, and the original Phantasy Star, this inclusion is a breath of fresh air. While the original Etrian Odyssey was a barebones mapping system (lines, treasure markers, pitfall squares), this game adds some nice icons to aid the player. Even though these icons are nice, the most helpful addition is the ability to check a box on the top left corner of the screen so that the map now follows the player while he or she moves about the dungeon (previously, the adventurer had to manually use tabs to change positions on the grid). This type of innovation shows that Atlus was very keen on complaints from its dedicated fan base and responsed to their critiques wisely.

Other gameplay elements are taken directly from the original as well: you still create a five person party at the guild hall, encounters are standard turn-based battles, and the difficulty level is quite challenging to say the least. With that said, I want to briefly mention some of the changes in gameplay since most players will want to see what is different and not what has been rehashed and copied from the original.

The first change to discuss is the inclusion of the “auto-battle” system. For anyone who played the original game, I’m preeaching to the choir when saying that the amount of grinding that needs to be done is substantial. By simply pressing the “L” button, your characters can engage in an “auto-battle” in which they all attack the enemies at random. While there is no chance to set up any kind of macros found in something like Final Fantasy XII (heal if critical, or use attack magic at will), simply having this all attack button saves the players hours of pushing buttons.

Another exciting introduction in this installment of the Etrian Odyssey series is the temporary geomagnetic fields found in the dungeon. In-between the strata (warp places found in five floor increments), there are geomagnetic fields that can be warped to, but not from. This simply means you can be warped to floor 8 from the city, but if you want to return to town or save from the field, you better make it to floor 10, or use a trusty warp wire. Now some may see this as a dumbing down to the series, but the game is already hard enough–these fields just allow for more efficiency in exploration.

While there are many more changes (storage facilities at the inn, the addition of three new classes, unique force attacks, a calendar system, a preview of how many of a certain item is needed to unlock a new weapon or piece of armor), the greatest gameplay improvements involve perfecting the control scheme in the game. The biggest complaint I had with the original Etrian Odyssey was that the bottom screen was stuck in the “map phase,” even when the adventurers were in town. This prohibited the players from using the touch screen to buy and sell at the shops or easily switch between characters.

Etrian Odyssey II has remedied any complaint and has made the best control system I’ve ever seen in an RPG for the DS. With the already stellar map system in place, EOII now allows the players easier access to statistics when purchasing armor and weapons. Using the bottom screen for stat improvement, now you can see if a fire gun helps raise your gunner’s “ATK” and/or “STR” attribute, while the top is screen is used to navigate between items. Moreover, now you can switch between characters by using the L/R buttons. This intuitive system allows for quickness, efficiency, and precision. What more can you ask for out of a control system?

While this title contains no CG sequences, or other moments that really exhibit the power of the DS system, the color palette of the game seems brighter and more vibrant than that of its predecessor. For example, the second strata of the game contains an autumn-like palette that has a bright orange that is really nice to look at. In addition, this iteration allows monster designer Shin Nagasawa more latitude. There is less palette swapping among enemies and there are more variations of the FOEs (mini-bosses) and bosses, some of which appear brilliant and completely original. Overall, the look and feel of the game’s graphics are very solid.

Composer Yuzo Koshiro of “Revenge of Shinobi” and “Streets of Rage” fame reprises his role for the Heroes of Lagaard. While nothing about the audio will blow away the casual gamer, especially one who is bereft of any video game soundtrack, I do think that Yuzo Koshiro varies the score enough times so that players will not get sick of the battle music. In addition, each strata has its own tune, and FOEs and bosses are accompanied with numerous scores. While the sound is not up to par with a DS title such as Atlus’ own Luminous Arc, it suffices for the purposes of the game.

As I mentioned in my review of the original Etrian Odyssey, my review should be carefully read. While I absolutely love the direction Atlus is taking with the franchise, there is no guarantee that you will. In fact, even at RPGFan, we have had completely different reactions among editors about the series and whether it is good or not. While the series as a whole is up for debate concerning its brilliance (or lack thereof), one thing is vehemently clear: if you loved the original Etrian Odyssey, get ready for a summer treat. Etrian Odyssey II: Heroes of Lagaard is everything you loved about the original, except even better.