Etrian Odyssey V: Beyond the Myth

...a frustrating yet fantastically enjoyable experience... 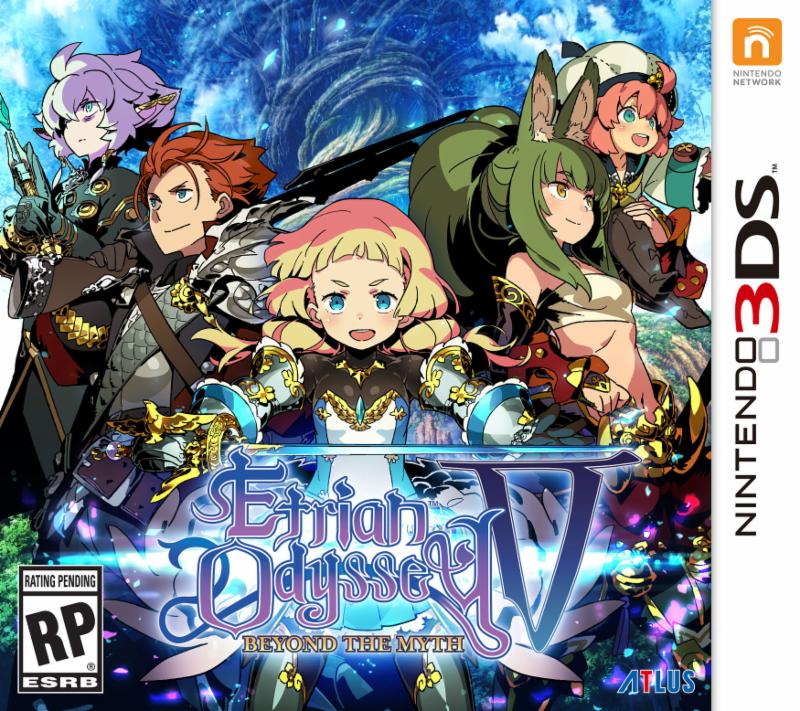 The Etrian Odyssey (EO) series has been tearing the hearts out of well-intentioned adventurers since its early days on the Nintendo DS. Delving into an EO title is surely not for the faint of heart, though the franchise does remarkably well at modernizing old-school dungeon crawling mechanics and improving on them with each title. And so, EOV: Beyond the Myth returns players to the labyrinth for more dungeon-crawling, map-drawing, borderline-masochistic fun.

In the land of Arcania lies the fabled Yggdrasil Tree, where, legend has it, those bold enough to reach its summit will see their greatest wishes fulfilled. The Council of Arcania has recently opened entry to the Yggdrasil, prompting a slew of adventurers to try their fortune in conquering the monstrous labyrinth within the massive tree’s confines.

The player is one such adventurer, arriving in the town of Iorys seeking glory even as an inexperienced pup. It’s a simple setup and one similar to every entry in the series. There are bits of lore, some intrigue, and mysteries to unravel as you ascend the great tree, but it is by no means a complex narrative. Deep stories aren’t why you play an EO game, though, and the main purpose is unequivocally to drive the game forward.

The EO series maintains a tried and true gameplay recipe that Atlus has spent the last decade perfecting, and EOV holds fast to the core formula. It boils down to tackling the Yggdrasil floor by floor, creating maps of each floor along the way, with pit stops at your base (Iorys in this case) to rest and prepare for each successive foray into the labyrinth. It’s a fairly basic concept made remarkably fun by additional mechanics that spice up EO’s dungeon-crawling foundation.

The aforementioned cartography system is a signature feature of the series and requires players to use the 3DS’s bottom screen to manually map each floor, which adds an engaging exploratory aspect to EOV’s cell-based dungeon layouts. Each map is also sprinkled with hidden mini-events that break up the monotony of trudging down the labyrinth’s winding corridors. These run the gamut from simply navigating precarious passages to triggering successive bouts of combat. They’re amusing diversions that end up granting a generous amount of experience I found vital to holding my own against EOV’s increasingly difficult enemy encounters.

The series’ fifth numbered installment also sees the return of item creation and purchasing that rely on farming ingredients found throughout the Yggdrasil, as well as powerful “FOE” enemies that players must avoid by using movement and the environment to their advantage. Each of these individual gameplay components makes for a series of challenges that manage to make hopping from floor to floor fighting enemies feel fresh and enjoyable. One notable reversion in gameplay from EOIV is the removal of a world map and return to more dungeons, which I suspect will divide the fanbase.

Of course, the EO series’ most revered gameplay feature is party customization and the depth of combat it affords. Battles are turn-based, but the strategies and tactics required for victory vary greatly depending on the composition of the player’s party. Players create their guild and each guild member from the ground up at the game’s outset. There are four races and ten brand new classes to choose from, though early on only certain races may be assigned certain classes. Each class develops via a branching skill tree where each skill can be further upgraded, and each has two Legendary Titles (think subclasses) to choose from for further customization. The design of the classes, their skill sets, and the areas in which they each excel are thoughtfully developed; no two classes feel or play the same way.

The EO series is known for being particularly challenging, and EOV is just as unforgiving of mistakes or poorly constructed parties as its predecessors. Each class has its strengths and weaknesses, and properly pairing and understanding them is the key to success. Case in point, I was underwhelmed by my fencer before understanding how to fully take advantage of his follow-up skills. Once I’d pegged how to squeeze the most out of them, he became a chain-attacking machine. The depth of customization adds a complexity that can be both daunting and gratifying, and I quite enjoyed reaping the rewards of a well-constructed party.

Each of the Yggdrasil’s floors are grouped into strata, and each stratum has its own unique environment and aesthetic. The first stratum, for example, is a forest environment with vibrant green and blue hues while the third stratum is a morbid wasteland haunted by the memory of death and destruction. The visual themes of each stratum are further enhanced through the fantastic soundtrack by long-time EO composer Yuzo Koshiro. Additionally, the anime-inspired character art by fellow EO long-timer Yuji Himukai is very well done if not a bit cutesy and sometimes fan-servicey.

In most ways, EOV is more of the same from a series that’s seemingly perfected the dungeon crawler. It’s a frustrating yet fantastically enjoyable experience with challenges that are unrelenting but generally well balanced. Even with the recent resurgence of the first-person dungeon crawler, EO remains a leading exemplar of the genre where execution of gameplay means everything.