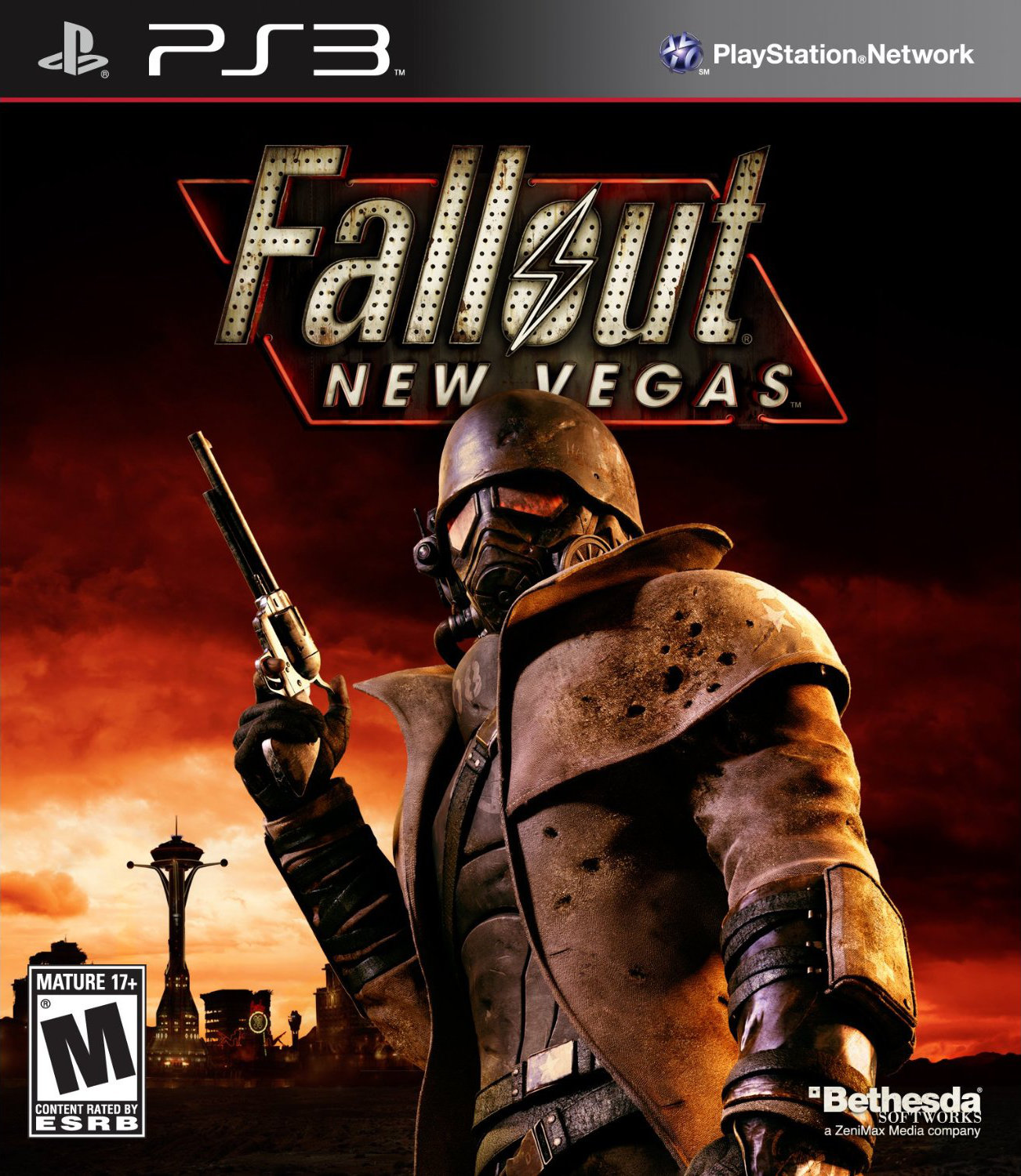 The essence of a game can be slippery. Sometimes twenty, thirty hours pass before that revelation. Hours and hours are spent with that itching feeling just under the surface of your brain trying to surface and reveal what you’ve been thinking since hour one. Sometimes the feeling is positive, as in the there’s something extra special about a game. Sometimes the itch is negative, as in there’s something innately wrong about the whole affair. In Fallout: New Vegas, the essence is buried beneath gobs of content, a large open world, and six tons of irradiated detritus. After about thirty hours, however, the essence bubbled to the top: inconsistency, and even this seems vague and evanescent. New Vegas is many things, but never the same things for any great length of time. At times New Vegas feels true to the franchise and offers intelligent and thoughtful scenarios. More often, however, New Vegas feels hollow, lazy, and dull.

Many have criticized New Vegas most heavily for various bugs not of the giant or rad varieties. These certainly exist and may cause some loss of time as the player loads and reloads after game-ending hiccups. But New Vegas’ central faults lay elsewhere. Glitches can be fixed, but lazy and uninspired design cannot be patched. In the vein of inconsistency, the Mojave wasteland features some truly unique, fun, and neat encounters and locations alongside scores of generic characters and locales. Fallout 3 managed to entertain me for 100 hours and beyond including the various DLC. After a mere 25 hours spent in the Mojave I felt reluctant to start up the Xbox 360. In short, I was bored.

After about 25 hours of decent, but inconsistent, content New Vegas brought on the boredom for the remaining 20 to 25 hours. With hundreds of people to meet (or “meat” depending upon play style) and places to see, my boredom came as an unnatural surprise, somewhat softened by Obsidian’s history of mediocrity. Less surprise and more I-told-you-so disappointment. Where Obsidian falters encompasses a few key areas of design. Obviously New Vegas’ use of Fallout 3’s technology and graphics does little to excite a desire for exploration. Almost every environment, object, and enemy is copied from Fallout 3 with few additions. Just because there are Sunset Sarsaparilla bottles everywhere hardly makes up for the expansion pack atmosphere. These small additions and a less-irradiated look cannot hide New Vegas’ ersatz nature, and the lack of changes makes exploration less compelling. While I never knew for sure, I had a feeling I wouldn’t come across anything in the Mojave that would amaze or surprise me. After finding what seemed to be every location, that feeling wasn’t wrong. Obsidian took the easy way out. In fact, each Fallout 3 DLC feels more like a different game than New Vegas does.

Regardless, New Vegas would have been unable to eclipse its predecessor even with completely original trappings for its content. The game simply lacks quality content. Of course, a few scenarios are worth remembering, reminding us of New Vegas’ essence: inconsistency. Like an abusive relationship, New Vegas bores for two hours and then apologizes with a couple sweet quests. And then the cycle repeats itself, but the player is helpless to escape without proper counseling and a pocket of pills. New Vegas features many more quests than Fallout 3, but most involve tedious fetching (but it’s funny right? because you’re a courier?), back-and-forth traveling, and a few short conversations. Several quests lead to interesting locations, but the emphasis has been pulled back from the post-apocalyptic archaeology seen in Fallout 3. Even the plot fizzles after a good start, lacking any dynamic scenarios like those found in the parent game. The main groups in conflict can’t match the quality of the Brotherhood of Steel and the Enclave from Fallout 3. Big Government, imperialistic New California Republic and macho, child-like Caesar’s Legion with a boner for Roman history and “cool” Latin names. The conclusion is truly customizable, however, and the number of options available to the player seems staggering. I was particularly satisfied with the outcome of my character’s actions.

One of New Vegas’ few unique additions is the faction system, reminiscent of the one from the original two Fallout games. In theory, this may be a decent idea, although I tend to hate guilds and factions in games, and precisely for the reasons that the concept fails in Obsidian’s execution of the system. New Vegas’ faction system bends an already structurally weak game back and forth nearly causing it to snap in two. Tying characters to faction and then binding those factions to a reputation system robs the game of nuance and reduces many of the game’s encounters to black and white mechanicality. Or worse, madness. The usual karma-affecting actions of thievery and murder negatively affect reputation without regard to the context. Characters from certain factions attacked my character for no apparent reason, resulting in an even further damaged reputation and failed quests as my character killed quest-givers in self defense. At times the behind-the-scenes mechanics of the factions system seemed to reduce everything to insanity, and I loaded a past save file just to escape.

Interaction between factions played out well at times, but without real effect. My character constantly heard rumors from NPCs about his deeds, but I never felt sufficiently rewarded or punished. In its most satisfying hour New Vegas allowed me to march into the base of one of the biggest players in the Mojave, kill every man in sight, and assassinate one of the most talked-about individuals in the West. My reward? A few people talked about it, but mostly everyone just kept making excuses as to why my actions would have no effect. By the credits roll, nothing had changed. My actions did not matter at all, and I felt like Obsidian had just given me the middle finger.

The complexity of New Vegas’ setting seems impressive, but it begins to collapse in on itself at times. Time and again I stumbled upon parts and pieces of quests not yet recorded in my Pip-Boy. The deaths of immediately hostile characters (some not even faction-related) ended quests I had never heard of, and characters spoke of events I hadn’t yet witnessed. I found NPCs that should have given quests I had already somehow completed. In a game this open and complex perhaps the player should expect such messiness. But then again, this just didn’t happen in Fallout 3.

New Vegas does at least one thing better than Fallout 3. The game makes better use of the player character’s skills in dialogue. Now those Science, Repair, and other lesser skills can solve more problems, including entire quests. This isn’t to say, however, that there are suddenly BioWare-level dialogue options. Most of the time, no, and I had difficulty role-playing a gentlemanly character. The dialogue itself varies from above average to cringe-worthy, made no better by inept and repetitive voice actors. Slang helps give some dialogue a personal edge, but just as often informal speech feels forced. Additionally, Obsidian apparently exchanged atom bombs for F-bombs. Just as with Alpha Protocol, swears are often embarrassingly awkward and out of place, present only for the cool factor, as if statistics prove video gamers are all twelve and immature. Worst, however, are the countless generic characters with purely functional dialogue and badly animated faces that damn any sense of immersion. These drones contradict the Fallout franchise perhaps more than anything else.

Graphically, the Fallout 3 engine no longer impresses quite as often as it once did, and Obsidian poisoned it with some of their own bad ideas. Namely the developers decided to make the Mojave a less irradiated place compared to D.C. Bright blue skies and a realistic sun. Yellow sands and desert plants still thriving. Not only does the yellow world look like stacks of puke sometimes, but the entire world proves to be less atmospheric than it should be. When I play a game set in a post-apocalyptic world, I want miserable destruction and terrible skies.

As for sound production, New Vegas again taps the well of inconsistency. Radio stations return, and with the exception of one very special and memorable station, they aren’t particularly interesting or novel. Voice acting runs the gamut, most falling near the ones and twos on a scale of one to ten, ten being the best. At times ambient noise pulls the player in, but the music often pulls the player back out. With a few exceptions, New Vegas’ original soundtrack is meager and weak, typified by that same synthetic noise heard in Alpha Protocol.

Gameplay remains largely unchanged from Fallout 3 with a few modifications. Cowboys must now contend with Damage Threshold, which causes heavily-armored opponents to shrug off points of damage. After achieving level five, scoring some guns, and meetings some pals, my character had little difficulty dispatching anything in the Mojave. Damage Threshold became negligible. New Vegas has a few tricks to make it occasionally challenging, but my sneaky character hardly had to sneak in order to blow past everything. His two companions contributed much to his overall power; they could take out a retinue of gangers in less than five seconds before I could react. Needless to say, companions have received a power boost in New Vegas: they can never die. Sure they fall unconscious for a spell, but afterward they’re up and ready to fight again. Companions are useful, but overpowered, especially with a highly charismatic character, which grants bonuses to companions’ fighting abilities. A new companion wheel, a welcome addition, makes commanding and controlling friends much easier though. Overall, however, the gameplay tweaks to the Fallout 3 engine don’t change the experience significantly, and somehow blasting muties just isn’t as fun this time.

I have focused on the negative aspects of New Vegas because they weigh most heavily on my mind after playing the game. New Vegas is not bereft of entertainment and memorable experiences, however. I generally enjoyed exploring the wasteland, even if what I found there did little to excite my brain or stir me emotionally. A few scenarios truly stand out. Indeed, New Vegas is a better game than many. But Obsidian owes every bit of New Vegas’ success to the creators of Fallout 3, and none of its failures. New Vegas is packed full of heartless content and sloppy design. The magic, personality and profundity found in Fallout 3 are all gone, blown away on desert winds, and with them, my respect for the game. Excusable in an otherwise mindlessly fun game, perhaps, but not in a boring one.