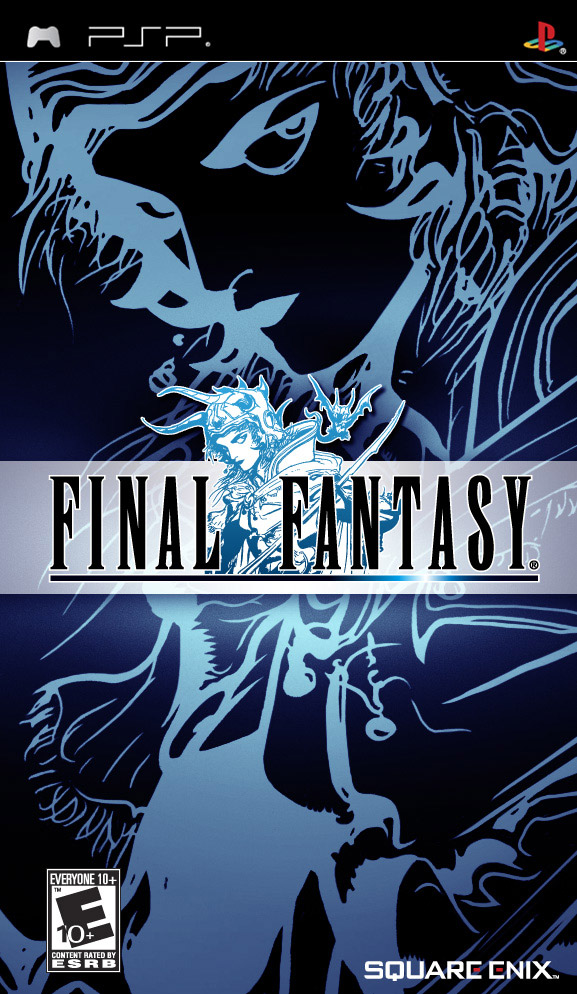 It’s hard to think of the electronic entertainment industry without the name Final Fantasy showing up at least a few times. One of Square Enix’s two juggernaut series, Final Fantasy was released more than twenty years ago, a title that was supposed to be the company’s swan song, their final title. Instead, the Final Fantasy series has sold tens of millions of copies and has become part of not only RPG history, but mainstream gaming history as well. To celebrate the twentieth anniversary of Final Fantasy, Square Enix is releasing two enhanced ports for the PSP: Final Fantasy and Final Fantasy II, the first of which hits US shelves this week. Is it worth paying another $30 to see Final Fantasy on the PSP’s 480×282 widescreen? If you’ve never played the original or any of its ports, yes, but if you’re reading this site, chances are you’ve played this game already.

First off, rather than go into great detail on the system, story, and battle of Final Fantasy all over again, this review will cover mainly what is different about the PSP release of Final Fantasy. If you’ve never played the original Final Fantasy, here’s your summary! Four light warriors, blessed with magical crystals, attempt to save the world. These four light warriors are one of six classes, which the player chooses at the beginning of the game. These classes are immutable after the initial selection, though they do evolve mid-way through the game. Most everything else is what is now considered standard for an RPG – there’s a turn-based battle system, equipment and spells to buy, and random battles galore. Noteworthy is that the PSP port does use the MP system from later remakes, not the spell level system used in the original game. It is, along with the original Dragon Quest, the quintessential Japanese RPG. With that out of the way, what’s changed with the Anniversary Edition of Final Fantasy?

The most important change comes with the platform: because of the PSP’s power compared to all of the previous platforms on which Final Fantasy has seen release, the interface and graphics have been greatly changed. All of the previous iterations of the original Final Fantasy look washed out and ancient compared to the PSP release, even the fairly recent Dawn of Souls version. All of the sprites have been redrawn and look vibrant, even if they still aren’t the most detailed of models. Spells and effects have also been given a new coat of paint and look spectacular.

One of the best changes in regards to the graphics has to do with the interface. All of the menus, interfaces, and dialogue boxes use large, easy to read text that’s very easy on the eyes. Transparency is abundant, not just in the interface but also in the environments, giving the entire game a very polished look. It’s clear that Square Enix didn’t simply take the graphics from the WonderSwan/PSOne/GBA versions of the title and throw them into a 16:9 aspect ratio, and that’s certainly a plus in Final Fantasy’s favor.

Square Enix has also re-mixed the music for Final Fantasy and added a few new tunes from other Final Fantasy titles, to boot. This music is clear, vibrant, and sounds great coming out of the PSP’s speakers. It’s still Uematsu’s classic music, and most fans of his music will enjoy the remixes.

So, what else has been changed? Not a whole lot. The bonus dungeon from the Dawn of Souls version of Final Fantasy has returned, and a completely new dungeon for the PSP version has also been added. The Labyrinth of Time is difficult, and each floor must be completed within a preset time period, lest it become flooded with powerful enemies. It’s a nice addition, but only those who are die-hard fans of classic gaming will likely find themselves trudging through it with glee. One of the changes that’s not quite as positive is the return to a disc-based format. Luckily, loading times are minimal, but they still exist, which is a bit sad, seeing as the original version would fit quite a few times into the PSP’s RAM.

Additionally, the modernization of the battle system has made the once-daunting difficulty of the original Final Fantasy miniscule. While locations are not explicitly given, and players are ambushed by enemies every few seconds, the re-direction of attacks and use of MP rather than number of spells make the game all too easy. Die-hards may try to inflate the difficulty by playing through with certain class combinations, but the average gamer will find themselves gliding through everything but the Labyrinth of Time.

Final Fantasy as a series has seen more evolution in twenty years than most would expect, due to the massive expansion of technological power. The original title, however, now stands simply as a picture of what once was. Because little has changed in gameplay, a title that was introduced to the open air twenty years ago feels stale now. Those who don’t own Final Fantasy in one of its forms will want to snag the PSP edition, but those who already do may not be willing to stomach paying $30 for something that they already own packed in with another title. Final Fantasy will probably still be around twenty years from now, let’s just hope that there’s a beefier release for the fortieth anniversary. It’s not that Final Fantasy for the PSP is bad – far from it – it’s just that it’s nothing gamers haven’t seen, and played, many times over.