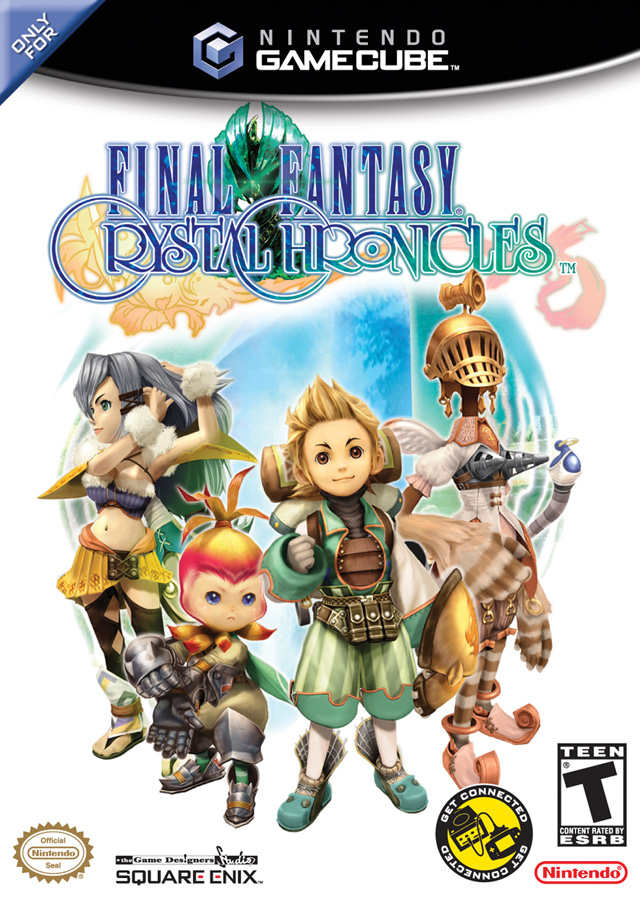 It has been a very long time since a Final Fantasy game appeared on a Nintendo console. Ignoring the Game Boy incarnations, Final Fantasy and Square have been absent since the “good ol’ days” of Super Nintendo. With the announcement of Crystal Chronicles, devoted fans and Nintendo aficionados went crazy in excitement and hope.

Like most Final Fantasy games, Crystal Chronicles is a world teetering on the brink of devastation and chaos. A lethal energy known as “miasma” has spread throughout the world, focusing at points known as “miasma streams”. Miasma is a sort of concentrated magic that manifests itself in the core elemental forms – Fire, Wind, Water, Lightning, and so on. By grace, the inhabitants of the world discovered a type of crystal actually has the power to repel the miasma. Each village then erected a monolith made from this crystal in order to safeguard its denizens. The crystal is far from “invincible”, however. It requires a substance known as “myrrh” to sustain its effects, an exceptionally potent liquid that can be obtained from myrrh trees scattered throughout the world. Armed with weapons and magic, entourages challenge three dungeons yearly in order to obtain a sufficient amount of the sacred myrrh.

This is the goal of Final Fantasy: Crystal Chronicles’ players. With fourteen dungeons to explore, and five years to cover these grounds, the quest for adequate miasma protection is a long and tedious one. In the course of their journeys, players will be able to meet other traveling caravans who offer praise, advice, warning, and sometimes even items, weapons, and armor. With the support of family back home, the players set forth to solve the many mysteries surrounding the world and miasma.

As with nearly every venture Square makes, Final Fantasy: Crystal Chronicles boasts graphics of unrivaled quality and grandeur. The game’s environments are the stuff of dreams, with lush ecosystems varying from savage tundra to oceanic fronts to forests choking with foliage. Amongst all of these, locales that include an ocean front are particularly breath-taking. The game’s water effects are some of the best to date in a video game, dazzling with glistening sparkles cast from the incandescent sun. Each year, the players journey farther and farther beyond the scope of the known-world, each endeavor leading to new sights and exquisite surroundings.

Almost as if to attest to the GameCube’s potential, Crystal Chronicles’ character and monster models are as refined as the environment. Both are varied in detail and design. Although the character models are all smaller then the majority of the monster and enemy models, and are designed to the specifics of the “Super Deformed” style, they fit undisputedly perfect into the world of Final Fantasy: Crystal Chronicles, the picture perfect inhabitants for the game’s luscious environments. Dynamic lighting and shadow are just another set of praise-worth elements to the visual splendor that is FF: CC. The game’s animation, although smooth vibrant, aren’t nearly as impressive as the animation found in the other Final Fantasy titles, particularly the PS2’s duo. This is hardly a complaint, but rather an observation. The fluidity of the characters’ walking and attack movements are the likes other companies aspire to achieve. Suffice to say, let it be said that Final Fantasy: Crystal Chronicles is not a complete embarrassment.

Now for more…imperfect aspects to Final Fantasy: Crystal Chronicles – namely every other facet to the game.

First and foremost there is the gameplay. Nothing about Final Fantasy: Crystal Chronicles’ battle system stands out as “new” or “innovative”, and without the addition of the multiplayer option it would have virtually nothing going for it. No matter what lackluster game might be in play, a group of friends goofing off and socializing can always make some fun come out of it. The cooperative play in FFCC is no different. It it allows for laid back, co-op, semi-challenging gaming. Unfortunately, this challenge is mostly the game’s “fun-factor” testing the limits of the player’s patience.

What makes controlling this game particularly awkward is its “innovative” employment of the GBA-GameCube link capabilities. While the concept of having the player’s individual menus be displayed on their own GBA’s is a great idea, and does manage to keep the TV screen from being overly cluttered (having the HP/MP displays and individual text boxes appear for 1-4 players is confusing enough), the GBA is a far cry from being “controller material”. For one, it’s about 3 buttons short of the GameCube controller, and also lacks the GameCube’s two analog sticks. Since Final Fantasy: Crystal Chronicles is a three-dimensional game; movement by the D-Pad can sometimes become tiresomely lacking. With only the shoulder buttons and two primary buttons to utilize in combat, it goes without saying that the battle system is very simple and straightforward. The L and R buttons slide through the character’s command slots, shifting through Attack, Defense, and whatever magic and items may be allocated to the small number of slots available. The A button performs whatever task is currently selected, with a charge move available when pressed down on “Attack” mode, and the B button is left only to pick up items or the chalice. Despite a three-hit combo able to be performed with proper timing when attacking, FF: CC becomes very monotonous rather quickly. This unfortunately is the result of the A button’s lead role in the control scheme. Shuffling back and forth through a limited list of items, magic, and attacks and initiating any one of them with only one button becomes very irritating very fast, especially when items are wasted or nothing is selected due to rush. Combine this with the limitations of having to walk within the diminutive range of the chalice’s light. It’s about as enjoyable as walking around with a cardboard box over your head. Not much can be accomplished, at least enjoyably.

Had the GameCube’s controller been taken advantage of, moves/items could’ve been allocated to the d-pad, while movement was navigated through the left analog stick. L and R could’ve been set to different “super moves”, perhaps, A, Y, and X being a trio of battle attacks able to be used in a string of combos. Somewhere in there the infamous “Z” button could’ve been taken advantage of, too, such as activating the menu. B would be left to pick up items/the chalice and cancel out of menus. Although the single-player mode does use the GameCube controller, it resigns it to a format not unlike the GBA’s. Movement is guided by the control stick, a plus, but L and R remain designed to shift left or right through the players’ command slots. A is the primary button once again, with Y activating the menu and X commanding Mog to carry the chalice. Z and the D-Pad are completely overlooked.

Since three-quarters of the game is spent in one dungeon or another, the vast majority of items are found within them. With these items, players can have new weapons, armor, or accessories forged for them, provided they own the blueprints and possess the Gil to front for the expense. Also found in each dungeon is a number of magicite orbs that grant players the ability of magic. Magic spells are allocated into the player’s command slots and can be used infinitely. However, once a player departs from a dungeon, their magicite remains behind, forcing them to rediscover spells in every expedition. Unlike the monotony of melee combat, the game has a somewhat interesting combo-system involving unified magic attacks. For instance, if one player casts Blizzard at the same point and at the same time another casts the spell, the two will merge to create “Blizzara”. In other cases, two different spells can combine to form an entirely new spell, such as Holy. This also generates further unification between players, as they must work together and count-off in synchronization in order to achieve these effects.

The only other aspect to Final Fantasy: Crystal Chronicles that is not detrimental to the players’ experience other then its graphics is its music. Although the score is most assuredly nothing amazing or of the caliber the majority of Final Fantasy titles possess, the composition is still exemplary, with several likeable tunes sure to catch loop in the minds of attentive listeners. The game’s main theme, praised by many, is a prime example. Unlike the past few Final Fantasy forays, Crystal Chronicles is devoid of voice acting due to the more-or-less absence of ample dialogue, particularly from the caravan members. What little dialogue there is comes through “random encounters” on the world map meant to push the story along and from the Caravan’s hometown’s occupants.

At its heart, Final Fantasy: Crystal Chronicles is a game whose target audience is undeniably that of the younger generation. What it lacks in story and diverse gameplay it more then makes up for in its ability to put a group of children in the same room and shut the up with wide-eyed enthrallment and engagement in multiplayer shenanigans. Despite the game becoming somewhat challenging in later dungeons, its simplistic nature would suggest its not ideal for players more accustomed to games with more intricate gameplay design. However, considering what “Final Fantasy” as a name and series represents, Crystal Chronicles is decidedly a failure in any attempt to hold to the tradition of innovation and creativity within the Final Fantasy series. It may be a victory for Nintendo and the GameCube console, but it’s surely the product of disinterest and negligence on Square’s part.