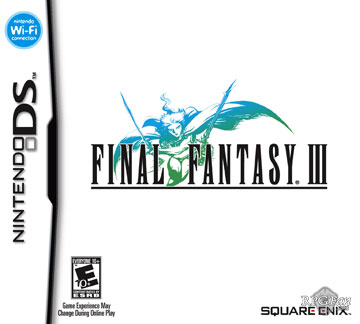 Rather than talk about the history of the Final Fantasy franchise and the numbering of the titles, I’m going to head straight into the breach and two things need to be said about Square Enix’s third Final Fantasy in as many weeks. Final Fantasy III is incredibly old-school in its orientation, with random battles galore, no mid-dungeon saves, and the need to purchase just about everything. On the other hand, FFIII has been updated with a gorgeous new DS graphics engine, remastered sound, and completely new touchscreen controls. The real question is, “Will I like this game?” The answer is pretty simple: If you’re a casual player and haven’t played an RPG since the release of Final Fantasy X-2, FFIII’s general difficulty and gameplay comparable to the NES title it was spawned from will likely turn you off. If you’re a regular reader of this site and an RPG fanatic, chances are you’ll dig Final Fantasy III.

Final Fantasy III’s biggest flaw is easily its gameplay, the only part of the game that wasn’t completely retooled for the DS release. Combat in the first DS iteration of Square Enix’s flagship series is a pure turn-based system, unlike the ATB system seen in the SNES and PlayStation titles later in the series’ life. Players familiar with the ‘attack/magic/item’ menu that exists in every turn-based RPG since the beginning of time will find themselves right at home with FFIII’s battle system. After combat ends, players are given an amount of experience points and gil, and if characters have used enough commands as their job, they’ll gain a job level-up. Standard level-ups provide characters with base statistics – hit points, strength, and the like – whereas job levels give properties such as increased spell slots or additional attacks with a class’s weapon of choice.

The third Final Fantasy on the Famicom was the first title to introduce the Job system to the series, which was later refined in Final Fantasy V and Final Fantasy Tactics. Unlike these two latter titles, however, the job system of FFIII is fairly basic, only providing the characters with a set of gear that can be equipped and a single specialized command that can be used. The basic classes like Fighter and White Mage have a fairly wide range of gear and abilities at their disposal, but don’t have a whole lot of power, whereas more powerful classes like Viking and Scholar have more limited scope, but can be incredibly powerful with their abilities. Instead of learning abilities with Job Points, as with later titles in the series, spells are purchased from vendors like weapons and armor, and are equipped as such. Much like Final Fantasy I, the spells are tiered, with spells at lower levels being weaker and higher levels being more powerful, but casters are given less spell points for higher level magicks. Other classes’ special abilities can be used mostly at a whim, though they’re not good for every situation.

Final Fantasy III’s dungeons are relatively well designed, and short in comparison to more modern dungeons like the Sandsea in FFXII which feature multiple save points. However, one major sting is the lack of mid-dungeon save points, as some random encounters can be difficult and destroy your party as easily as a boss fight. Dungeons and secrets on the map become visible as players zoom in their camera and find any items with a sparklie effect on them. Most of the time it’s a rock or switch or something similar that will open up a nearby pathway that leads to a boss. Outside of the dungeons, the world map provides a place where players can save their game, travel from city to city, and traipse about in their airship, boat, or foldable canoe. Unfortunately, town healing systems are more than a little bit awkward – there are two types of healing waters as well as inns: inns may remove status effects, but don’t resurrect dead party members; one type of holy water re-energizes living party members but leavs the dead alone; the other type of water resurrects party members, but leaves live members damaged. It can be a bit disheartening to head to the inn and find out your dead white mage is still dead.

All of the gameplay can be played either with the touch screen or the d-pad and face buttons. Both control schemes work well and the choice simply comes down to personal preference. The button scheme is relatively standard to RPGs before analog sticks, with players holding a button to run. Touch screen commands are simple, with players dragging in the direction they want to run, with the menu, camera command, and chat with allies accessed by tapping the corners of the touchscreen. During battle, touchscreen commands can be both a blessing and a curse. Commands like magic can be dragged along enemies to select them, but unfortunately, the command guard is right nearby and does not have a confirmation, so it’s fairly often that the last character will simply do nothing.

Graphically, Final Fantasy III is one of the best looking polygonal games on the console, but that certainly doesn’t mean it is without flaws. Due to the lower resolution on the DS screen in comparison to a standard television screen, characters are limited to relatively undetailed textures, but the character models themselves are buily well and can be compared to PSOne era models, but much smoother. All of the character models animate smoothly and spell effects look fantastic. The only chink in the graphical armor in this game comes down to something I discussed earlier – the zooming of the camera to find secrets. This zooming makes the already undetailed textures look bigger, and the game goes from looking like one of the best DS games ever to looking like Need for Speed Underground for the GBA. It’s not a pretty thing to see, but luckily it rarely comes along. The one thing that Final Fantasy III ultimately proves is that it’s possible to have absolutely fantastic looking FMV on Nintendo’s dual screen console. The opening video for FFIII is simply stunning, and it’s something I watch almost every time I boot up the game.

Aurally, the game is a mixed bag; the remixed music sounds good, as do all of the sound efffects…but that’s all there is. There’s no sound effects as a character talks to imitate the tone of voice or the like. There’s nothing wrong with the audio that’s there in the game, but it just feels like there’s something missing – that last little ethereal bit. The other part of FFIII that seems ethereal is the Wi-Fi portion of the game. There’s no online battling of the sort, just the ability to slowly type out messages to friends. Unfortunately, to unlock some of the extra features in the game, players are required to send or receive messages, either locally or over Wi-Fi. It’s not a huge gripe, but it’s something that will be a bit of a hassle for completionists.

Final Fantasy III has much more in common with Final Fantasy I than it does with Final Fantasy II or Final Fantasy IV story-wise. The characters are the Warriors of the Light, chosen by sentient crystals to restore the balance to the world and bestows them with power. The four characters are Luneth, a boy from Ur, his childhood friend Arc, a mechanic’s daughter Refia, and the eldest of the four, the knight Ingus. The four travel around in attempt to restore balance to the world against random enemies and incredibly forgettable bosses. The story exists only to tie the different dungeons together; there’s little dialogue that matters, and while the characters seem to have their own personalities, they’re all rather one-dimentional. Certainly, there’s Cid, there’s the Warriors of the Light, and all of the old-school standbys we’re used to, but even in a portable game, players are looking for a bit more than this.

In the end, if you’re a fan of RPGs, the kind of person Square Enix wants to pick up this game, you’re going to like Final Fantasy III. It may not be the full recreation of fan favorites Final Fantasy VI or VII, but it’s a brand new game for RPG fans to take down on the go. While the uneven difficulty and classic-style gamplay may turn off casual gamers, chances are if you’re not reading this review via a link from GameRankings, you’ll enjoy taking Final Fantasy III for a spin.