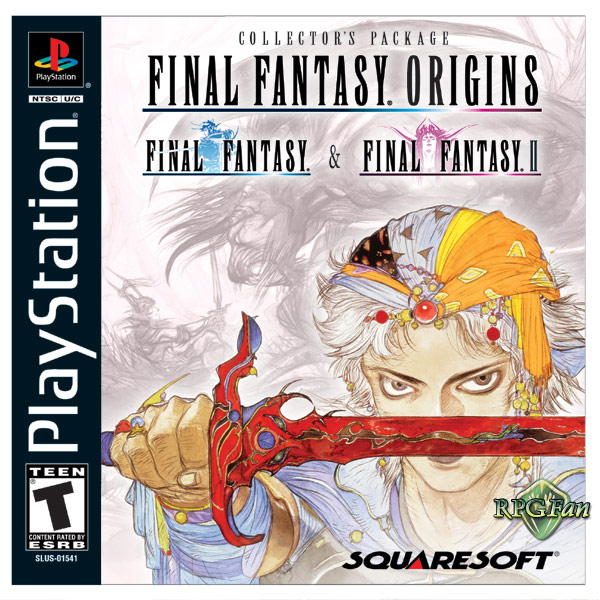 Through the numerous installments released across multiple consoles, Square’s Final Fantasy games have become the most popular RPG franchise in the world. Interestingly enough, however, it wasn’t until Final Fantasy VII hit US shores that Square’s flagship series began to reach the height of its popularity outside of Japan. As a result, many RPG fans have still never experienced the earlier Final Fantasy installments. The release of Final Fantasy Origins, which features the first 2 games in the series, allows these fans to see how Final Fantasy began.

As Final Fantasy I opens, the world is in a bleak state. The wind has died, the oceans rage wildly, and the earth has begun to decay. All hope for salvation lies with the arrival of the four Warriors of Light in the kingdom of Cornelia, each bearing an elemental crystal.

In Final Fantasy II, you play as Firion, a young man residing in the kingdom of Fynn. One night, an evil empire successfully invades Fynn, torching everything in its path. It is only through sheer determination and the help of some rebels that Firion and his companions Maria, Gus, and Leon are able to escape from the onslaught. Waking up in the rebel base of Altair, Firion and his allies vow to extract revenge on the empire for destroying their homeland.

As one can probably guess, the storylines in Final Fantasy Origins are neither deep nor particularly exciting, showing their age from a time when the simple act of hunting a dragon lord was considered a good RPG plot. In addition, character development is almost nonexistent (there aren’t even any pre-created characters in Final Fantasy I). To its credit, though, both of the storylines in Final Fantasy Origins, particularly that of Final Fantasy II, stood out when the games were originally released on the NES. Also, the updated dialogue for both games is solid in spite of its highly limited depth, avoiding spelling and grammatical errors and flowing reasonably well.

Similar to its storylines, Final Fantasy Origins shows its age in its gameplay, especially in Final Fantasy I. Both games rely heavily on classic traditional RPG play mechanics. The turn-based battles are randomly encountered, and in combat, magic and items can be used to attack enemies and aid allies. Aside from a character class upgrade, Final Fantasy I carries no gameplay innovations beyond the basics.

Final Fantasy II, however, does possess an interesting experience point system, where experience points don’t exist and there are no actual experience levels. Instead, characters increase their attributes through combat. For example, using magic increases your maximum magic points as well as the strength of the spell used, taking a certain amount of damage increases your maximum HP and defense attributes, and attacking enemies increases your skill with a particular weapon and your attack attributes. More recent RPGs such as Game Arts’ Grandia have borrowed many aspects of this system, and although it has no superiority over traditional experience point systems, it does give players some variety from most other RPGs.

Final Fantasy Origins executes fairly well in its gameplay. Because both games originate from a time when RPG gameplay execution was horrible, Square has wisely added some user-friendly features (which we usually take for granted in RPGs of today) to counterbalance the archaically clunky execution of the NES versions of the first 2 Final Fantasy games. For example, characters now auto-target new enemies in combat when their targeted foe is defeated; before, their attacks would be wasted on dead enemies. Cursor memory, the ability to speed up dialogue, and a dash button are some of the other modern-day amenities offered in Final Fantasy Origins. Of course, for all you fans of nostalgia (and gluttons for punishment), these new features can be turned off during gameplay.

However, in spite of the improvements, Final Fantasy I still has a lot of gameplay problems. The encounter rate is way too high, and the difficulty balance in normal mode requires annoyingly immense amounts of leveling up, to the point where the game is almost unplayable to anybody used to the superior flow of today’s RPGs. In easy mode, the game is too easy, but the irritating encounter rate isn’t noticeably reduced. Fortunately, Final Fantasy II, which doesn’t have an easy mode, has a much more ideal encounter rate and difficulty balance.

Final Fantasy Origins features reasonably responsive control. The onscreen characters in both games move well in 4 directions, and a dash button speeds them up on command, though the characters are not quite as responsive as those in most RPGs of today. The menus have been revamped to closer resemble those of present-day Final Fantasy games, and these are easy to navigate and a vast improvement over their original counterparts.

Graphics are where Final Fantasy Origins is at its weakest. Although the visuals in the games have been significantly improved over their NES originals, they’re only a small step above their WonderSwan remakes and don’t end up any better than that of first generation SNES games. In the overhead area maps and on the world map, the small character sprites lack detail, and the backgrounds don’t fare much better. The visuals do a bit better in battle, where the sprites of characters and enemies alike are larger and more detailed, and the 2D backgrounds are actually impressively intricate. There’s also an art gallery added to Final Fantasy Origins, where players can unlock and view original character artwork drawn by Yoshitaka Amano.

Conversely, Final Fantasy Origins is strongest in its sound. On one hand, the sound effects are nothing special; they’re typical for traditional RPGs from the 16-bit era. Voice acting is limited to the few CG movies that have been added for the PlayStation re-release of the games, and there’s no real dialogue, just emotional non-verbal expressions.

On the other hand, the soundtracks for the two games are excellent, harkening back to the days where composer Nobuo Uematsu focused on melody over ambience in his works. In addition, the sound programming for both scores has been updated; in the PlayStation remakes, the soundtracks sound as if they were played with real instruments, and the improvement over the NES originals is astounding. The Final Fantasy I score, arranged for the PlayStation by Uematsu, is particularly inspired; tracks like “Chaos Temple” and “Boss Battle A” are among the finest that he’s ever done. The Final Fantasy II soundtrack, arranged by Tsuyoshi Sekito, isn’t quite as strong, but with tracks like “Battle Scene 1” and “Castle Pandemonium”, it’s also a refreshing breath of air from Uematsu’s more muddled compositions of late.

Overall, the simplistic gameplay mechanics and dated graphics of the two RPGs contained within Final Fantasy Origins don’t stand up to their more technologically advanced counterparts of today. Each, however, is a worthwhile game in its own right, and RPG fans who would like a taste of nostalgia as well as to see how the biggest RPG series around got started are encouraged to give Final Fantasy Origins a try.