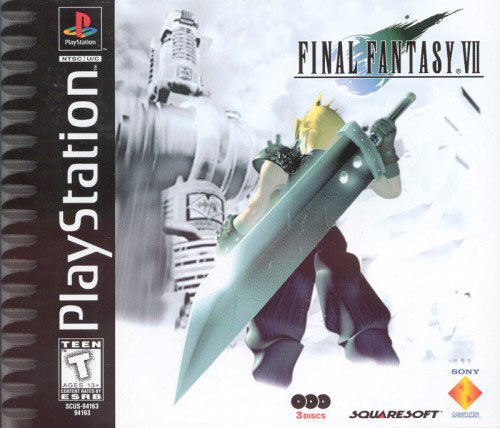 Final Fantasy VII was the much hyped and extremely anticipated sequel to one of the best selling game series of all time, and its release was met with great success. But how does it really fare? Thankfully, the game melds all of requirements of a good RPG into one hell of a bundle, serving up what I feel is one of the best game experiences of all time.

The back cover to FFVII states the plot perfectly: “What begins as a rebellion against an evil corporation becomes much more. And what erupts goes beyond imagination.” That sums this excellent plot up- you begin as the mercenary Cloud Strife and your adventure goes from a small rebellion to saving the world in the most grandiose of ways, from an ancient evil that wants the planet. The plot twists are incredible and the characterization only makes it better. The strong plot combined with excellent twists and discoveries only make for a more memorable, stunning experience. The plot is a classic, the best in the Final Fantasy numbered series to date.

FFVII marked the departure of longtime Final Fantasy character artist Yoshitaka Amano, something that was a worry among people hoping for a good game. While the artistic style of Amano is gone, the “cool” look of Tetsuya Nomura is in. His designs are both original and pleasing to the eye, from Cloud’s hair (which is just damned cool), and everything from Vincent’s clothes to Red XIII’s striking red fur.

The characters are also excellent – their personalities individual, distinct and also very funny. The development is excellent as well, with characters making self-discoveries due to the different turns the plot takes and the things they find out about their pasts. Though the dialogue is marred with grammatical and spelling errors, it’s still lively and each character has a different manner of speaking, adding individuality. Characters like Cloud, Tifa, and Sephiroth come to life and the gamer will most certainly get emotionally attached to the all-star cast. The antagonist is outstandingly developed and will no doubt incite intense fan fictions.

People were also worried that FFVII’s soundtrack wouldn’t live up to the name of its predecessors. Well, it does that and more. Nobuo Uemastu composed a masterpiece. Every track in FFVII fits its scene and is wonderful as stand-alone music. The battle themes, town themes, character themes, they’re all great- classic melodies and catchy riffs. While the MIDI sound quality isn’t what it should be, there is no denying the outstanding compositions present in FFVII and their excellent feel.

Where FFVII’s music truly shines is in its diversity. Some tracks, like Wall Market’s “Oppressed People”, stand out as punk-techno influenced tracks, and other masterpieces like “One-Winged Angel” feature Latin choirs and orchestral instruments. Uemastu manages to cover a wide variety of styles, like jazz, rock, and classical and still keep it all A+ work. Nobuo Uematsu keeps getting better.

Final Fantasy VII took the traditional Final Fantasy fare to the next level. The improved graphics made for a most enjoyable experience. The battles were fully polygonal and very good-looking, and the new magic system, Materia, was an excellent idea. Down with the old “character class” system, in with the new customizable magic system. The summons were awesome looking, and the idea for the Limit Breaks was also original and welcome; as you take damage, your Limit bar builds up, and when it’s full, you get to pull of a super-powerful attack that’s not only strong, but also pretty. Only problem is that there are still random battles… someone has to rid them from RPG’s someday.

Square put a lot of effort into making FFVII a beautiful experience and they succeeded. FFVII is filled with beautiful pre-rendered backgrounds with super-deformed polygonal characters. In fact, that’s the only bad part. While the characters aren’t horrible, they look really weird, especially up-close, and one may wonder why Square designed them like this. In battle, though, they look great, as do the enemies. FFVII is also filled with beautiful cinematics from beginning to end. This is one pretty game!

FFVII’s translation is mediocre in some respects. While the text always seems to be lively and gives life to the characters on the screen, it’s marred with spelling and grammatical errors, some of them so obvious you want to shoot the translators. But in my opinion, the worst kind of translation is a stale one, and FFVII’s certainly isn’t. The dialogue is still interesting and most of the times, you won’t even notice the errors… well, OK, you might, but somehow the feeling isn’t lost like in some other games because of the words used. They’re not trite and they’re colorful, like Barret’s constant cursing, or Yuffie’s lively, caffeine-high talking. 🙂

The control was fine; FFVII begs for analog control but unfortunately Sony didn’t make the controllers yet. Navigating isn’t tough; especially since you can turn a pointer on to find out where to go.

FFVII is probably one of the less difficult RPG’s out there. Does this take away from the fun? Certainly not! This game is bliss throughout, and only people looking to nitpick so they can bash this game will have a bad experience. The game is about 50 hours long. Overall, the game delivers in every department. If for some godforsaken reason you HAVEN’T played this game, do so. Your world will change.