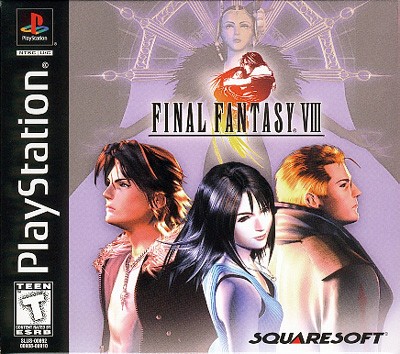 Upon first hearing of Square’s plans for the next great installment in their flagship series, I had many doubts for Final Fantasy VIII. The lack of Amano’s trademark artwork and character design and the transition from “fantasy” to “reality” and science fiction had me worried that the game would fail to meet my expectations. After picking up an import copy of the game, I realized how wrong I was. Final Fantasy VIII is a masterpiece, one of the greatest RPGs of our time.

The story begins with a man named Squall Leonhart. He is a loner and a social outcast, a rather cold individual. Squall is training at the Balamb Garden military academy to join a Special Forces unit known as SeeD. However, there are many students competing for a place in this elite squad, among which is Squall’s main rival, Seifer Almasy. At this time, the Galbadian Empire has declared war and is trying to gain control of the world. To test the skills of the SeeD candidates, the Garden sends Squall and Seifer, along with Zell, an enthusiastic fighter, to lead an assault on the port town of Dollet. Upon their return, the students who were selected as SeeD members are announced, Squall among them, and a graduation ball is held later that night. It is at this dance that Squall meets Rinoa, the leader of a resistance organization known as the “Forest Owls”. The two share a dance in one of the most enchanting and memorable FMV sequences ever produced. The next day, Squall and his party are given their next mission: the infiltration of the Galbadian capital and the assassination of the witch, Edea, who seems to have control over the President of the evil empire. What is she trying to achieve? Is there an even greater force working behind her? These questions and more are answered throughout the course of the game. From here, Squall’s journey truly begins in an adventure that spans the entire world, outer space, and beyond.

Also present in Squall’s dreams is a man known as Laguna Loire. There are several scenarios throughout the game in which you must play as this soldier with his companions, Kiros and Ward, living through fractions of his life. This man’s connection to Squall, as well as that of his daughter, Elone, is a critical element of the plot and the development of their characters throughout the course of the game is extraordinary.

In regards to the actual gameplay mechanics themselves, Square has created the magic “Junction” system. Statistics are raised by junctioning spells to different attributes of a character. Certain spells are more compatible with certain attributes than others, making junctioning an art of sorts. For example, one hundred Cure 3 spells will boost Squall’s HP more than one hundred Fire spells would. Therefore, understanding the standard Final Fantasy series system of elemental balances and power becomes important. However, it is important to note that magic is not automatically acquired and cast using MP in Final Fantasy VIII. Rather, it is obtained using the “Draw” system. During battle, you can draw the enemies’ spells from them and either cast them immediately or store them for later use. There are also multitudes of draw points located in certain places around the world from which you can draw spells. Magic is not the only thing that can be junctioned, though. The trademark summon spells return, this time in the form of Guardian Forces, or “GFs”. GFs are like playable characters in the fact that they gain levels as they are used in battle, but they also gain Ability Points, or AP. These points can be used to make the GF learn certain abilities, ranging from item or magic synthesis, statistic bonuses, etc. The combinations are endless and allow for true character customization through the utilization of this system.

Square has balanced combat in Final Fantasy VIII by making all the enemies and bosses increase in levels and power as does Squall’s party. Aside from the essential Junction system, the other keys to victory are Limit Breaks, which have also undergone revision. These supremely powerful attacks can now be used over and over every turn as long as a character remains in critical condition. Other ways in which the game strays from the expected standard are the absence of armor, treasure chests, and money won from battles. Each character has a weapon that can be upgraded throughout the course of the game by finding certain sets of items. Money is not given for defeating enemies in random encounters. Rather, Squall and friends receive a stipend from SeeD every several thousands steps or so the party travels. How much money they receive depends on their SeeD Rank, which can be increased by passing a series of true-and-false tests featuring questions on the game’s mechanics.

Another important aspect in which Final Fantasy VIII shines is its one mini-game, Triple Triad. It is a card game in which you and an opponent place cards down on a 3×3 board. There are complex rules involved, but if you win, you are allowed to select any one of their cards to keep for your own, though they also have the same privilege as well. Cards fall into several categories, the weakest ones being of monsters and the strongest ones being bosses, Guardian Forces, and characters. Collecting strong cards is a great benefit in the fact that they can be transformed into powerful items that can be used in weapon creation, learning new special attacks, etc. Rather than the plethora of mini-games seen in Final Fantasy VII, Triple Triad is highly influential and important to your progress through the game.

As anyone can tell from looking at any screenshots that the graphics in this game are by far the greatest ever produced. Rather than the blocky polygons utilized by the game’s predecessor, Final Fantasy VIII’s characters are all computer-rendered and placed on pre-rendered backdrops. The advantages to this are increased freedom of movement and realism, the disadvantages being slight pixilation upon zoom-in scenes. Each character’s movements and actions were motion-captured and performed by actual Japanese actors. There is an abundance of full motion video scenes, all of which are beyond incredible. The intro and ending scenes are worth the price of admission alone.

Final Fantasy VIII’s music is standard RPG fare. Although composed by Nobuo Uematsu, it seems to lack the profound power and feeling that the Super Famicom classics embraced. However, the songs are appropriate for each unique area or situation faced by the party, the most magnificent of which is “Eyes on Me”, the theme of the game performed by Chinese pop-star Faye Wong. Other notable scores include the boss music, “Force Your Way”, Laguna’s battle theme, “The Man with the Machine Gun”, and “Love Grows”. The final battle song, “The Extreme”, doesn’t quite live up to One-Winged Angel, but, nevertheless has an upbeat techno rhythm that is actually quite enjoyable.

Many people have made the judgment that Final Fantasy VIII’s characters are two-dimensional and without depth. Some claim that the game is a failure because it strays too far from the standard series elements that made Final Fantasy what it is today. I disagree completely. While Squall is a typical loner, he undergoes a great transformation throughout the course of the game: he learns to love. He learns to find pleasure in life. This is something that must be experienced. Any gamer with open-minded capacity will agree and find the eighth installment of the most magnificent RPG series worthy of its name.