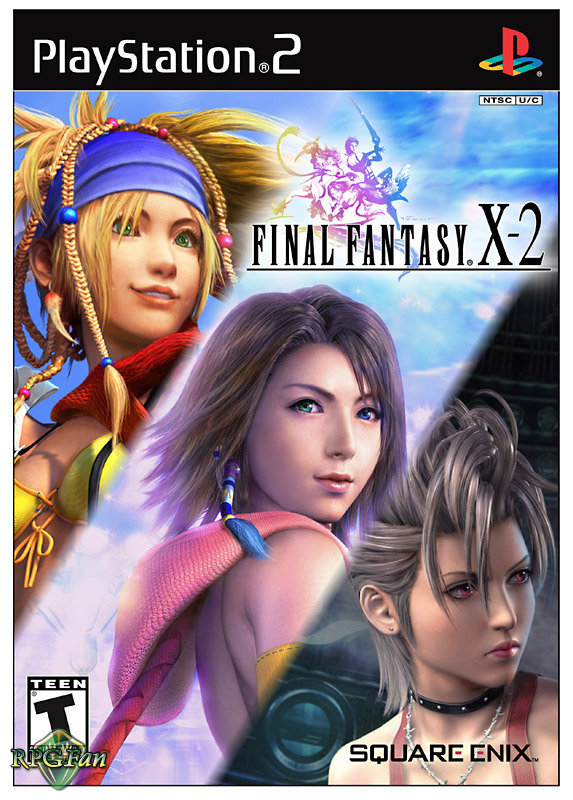 Being the busy sort of guy that I am, I finally got around to playing FFX-2 long after it had been released. Therefore, despite my best attempts, I heard a great deal about the game long before I equipped my first dress sphere. Thankfully, none of the story was ruined for me, but I did hear a large amount of opinionated ramblings about how scantily clad the woman were, what a big departure this was for Square Soft, etc. etc. From these musings I began to question what I would really think of the game. To tell the truth, I ended up loving it! Sure, there is a wide assortment of virtual booty strewn about, but being the non-prudish, red-blooded male that I am, I certainly could find nothing to complain about.

The gameplay of FFX-2 is kind of a mix and match of a million games that came before it. First off, while the graphics look very much like FFX, the gameplay has changed a good deal. The game has gone from being completely plot driven and, quite frankly, extremely linear to being mission-based and putting a little bit more control in the player’s hands. Don’t get me wrong however, the game is still tightly structured, but the option to do your own thing is slightly more prevalent.

One very important staple to any RPG is its battle system. After all, if you are going to engage in hundreds of battles, they should at least be interesting, right? In FFX-2 I was slightly surprised, and in a good way. First off, there is a new fast and furious Active Time Battle (ATB) system that has you scrambling to find the right commands. While somewhat intimidating on the first attempt, the system quickly becomes intuitive and, with the addition of fun stuff such as combos, soon grew to be quite fun.

The world map and navigation run pretty much the same way as in FFX. That is to say that you either hoof it on foot, or you make a selection from a menu and the airship takes you where you need to go. Thankfully, you have access to the airship right from the get go, so traveling is a cinch. Interactivity in towns and dungeons is largely the same, but some new mission-exclusive ideas have been added, some for the better, a few for the worse, and the majority being of the kind that make you curious as to what the developers were up to on their breaks (control the news camera anyone?)

One thing that FFX-2 attempts to do, but does not do all that well, is integrate a few too many mini-games. Now, I have never been a particularly big fan of mini-games in RPGs, and perhaps that has something to do with it, but I really didn’t find all that much to like in FFX-2 mini-game-wise. Near the beginning of the game (and continuing onwards), you will find yourself choking down mini-game after boring mini-game just to progress with the story. That is an addition I could have done without.

Square didn’t stop the changes just at the battle system; the whole experience system has received a complete overhaul as well. Eschewing the sphere grid of FFX in favor of the more fun, and much more robust, job system reminiscent of FFV, FFX-2 takes the experience system in a great direction. Finding the ability to change to different jobs and then learning the abilities contained within is great fun and is practically a game in itself. The only problem I had with it is that, while you will certainly run across most of the dress spheres required to learn jobs throughout your adventure, only those with a strategy guide or a very keen sense of exploration will find all of the cool jobs on their first run through.

Did I say first run through? Yes, FFX-2 allows you to start up a “New Game +” once you have completed the game. This allows you to go back and pick up the stuff that you may have missed while progressing the story even more. Since there are multiple endings and any number of special events you could easily miss, this is a very welcome addition.

From a plot standpoint, FFX-2 is very solid. Those of you who have a problem with the whole “Girl Power” thing might find some of the dialogue a bit… sailor moonish? But those of you who can look past that and see the story for what it truly is will enjoy it immensely. I have yet to achieve the “Best Ending”, but even the ending I viewed was very satisfying and capped off what I consider an excellent adventure. Square proves that it can take even a game filled to the brim with intentional cheesiness and give it a compelling, satisfying story.

Graphically, what can I say? FFX-2 looks a lot like FFX, which is one of the most beautiful RPGs I have ever laid eyes upon. The CG movies are unbeatable, and the character models are just as nice as they always have been. Plus, much eye candy has been provided to the gaming guys out there, in that the ladies are constantly wearing next to nothing and changing outfits in the middle of nowhere. Cheap “Sex sells” attitude? Absolutely, but hey if it gets me another wonderful FF game, I’m all for it.

Musically, FFX-2 is a departure from the series. You will not hear as many serious, wistful tunes as you will more funked up, light-hearted, fun tunes. I personally enjoyed the soundtrack and listen to it whenever I am in the mood for a bit of upbeat RPG tuneage without all the depressing melodrama. That said, there are a few pieces that just really do not feel like Final Fantasy, so I am absolutely sure it is not for everyone. I am all for originality, though, as long as it is of high quality, and in that respect FFX-2 comes through with shining colors.

Overall, I judge a game based on how much I enjoyed it. I look back and decide whether I truly wanted to be playing or whether I felt as though I was slogging through just to reach the end. Thankfully, FFX-2 falls into the former category. While slightly flawed, I found myself rushing home from work and skipping Taekwondo lessons to play it. All in all, if you come into FFX-2 with an open mind, you will have a good time. If, however, you are looking for your grandfather’s Final Fantasy, you may wish to look elsewhere.