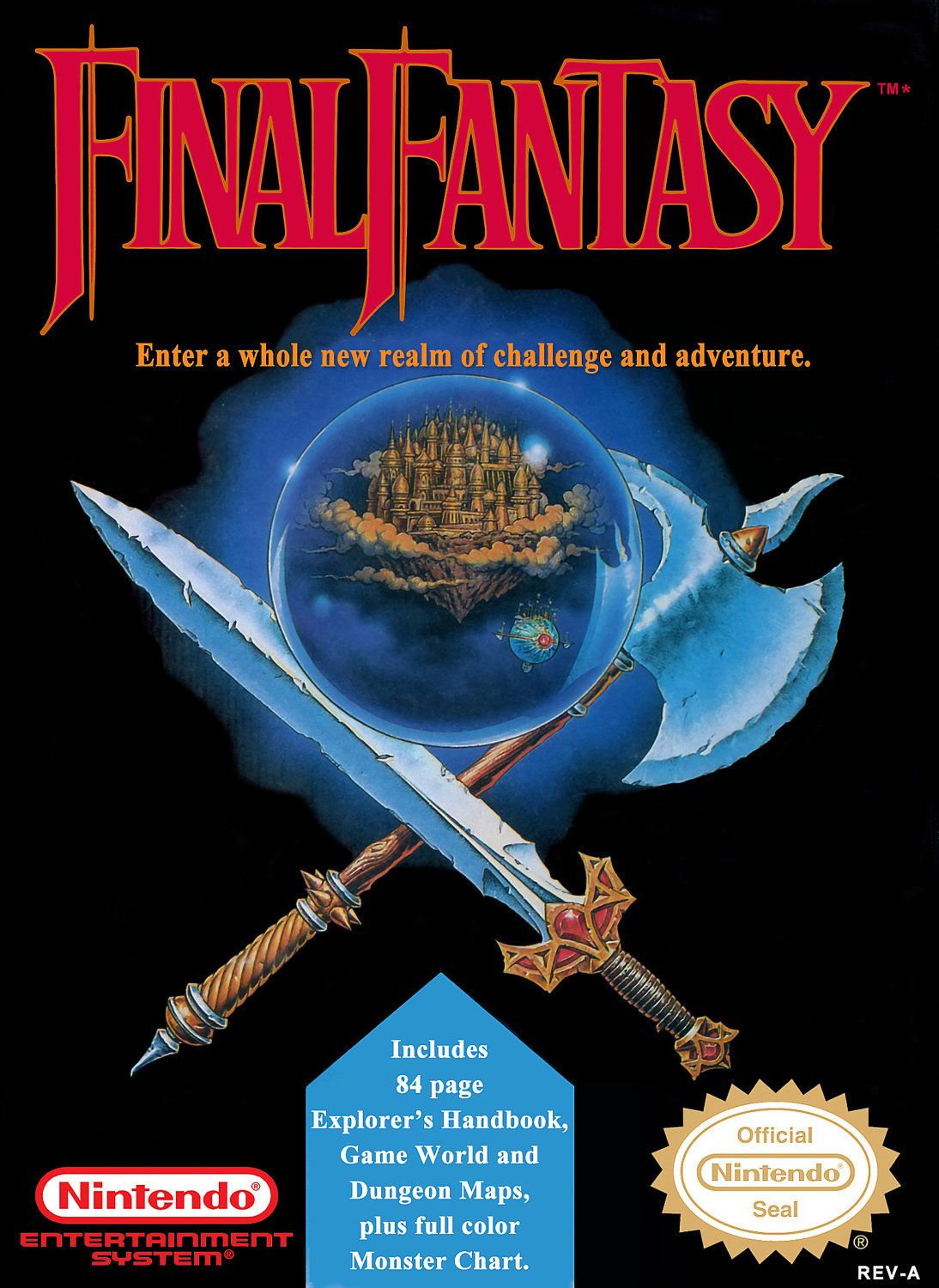 This is the one that started it all! Back in 1986, Final Fantasy was created as Square’s last ditch effort to see if they could make it as a game developer. When it was all said and done, Final Fantasy became a million seller in Japan, and Square discovered their talent for making RPGs. Three years later, Nintendo picked up Final Fantasy for an English translation and overseas release.

The opening message, which appears before the title screen begins by telling the player, “The wind stops, the sea is wild, and the earth begins to rot”. Then, we learn that the sage Lukahn made a prophecy that when the world reached a dark time, four young warriors, each carrying one of the four elemental orbs, would appear and seek out the cause of the world’s problems.

The heroes of Final Fantasy, known as the Light Warriors, are chosen by the player. The player has a choice of six different occupations for each member of the team. The first of the six is the Fighter class. Fighters have high strength and high HP, and can easily wield heavy swords and axes or wear metal armor. The next choice is a Thief. Thieves are fast, but they have fewer HP than Fighters, and cannot use as many weapons as Fighters either. Black Belts have the highest attack strength of any class, and are faster than Fighters, but their defense is less than that of a Fighter or Theif, and is the only class that has no magic power. A Red Mage is a balanced character. Red Mages can use both White and Black magic and they are fair at fighting. The White Mage can learn healing and defensive spells and is a little stronger than the Black Mage, but until late in the game they have very little ability to deal damage to the enemy. Finally, Black Mages have the ability to use offensive spells that damage and incapacitate the enemy. Each hero can be given a name of up to four characters. There comes a time in the game when your heroes will be promoted to higher classes. After promotion, the heroes will become stronger, and also be able to use some of the powerful weapons, armors, and spells that they weren’t able to before.

Once you’ve assembled your team, the game begins in Coneria. Here, the Light Warriors receive their first task. The king of Coneria sends the young travelers to the old abandoned Temple of Fiends, where turncoat knight Garland has brought the king’s daughter Sara. This is a short assignment used primarily to prepare newcomers and get the player familiar with the battle system, as well as some of the enemies items, spells, and weapons present in the game. When Princess Sara is safely back in Coneria, the grateful king has his workers build a bridge that leads to the rest of the continent. When the Light Warriors cross the bridge, the Final Fantasy prologue song plays, and the screen switches to a display that gives a message saying “And so, their journey begins…” and also displays the credits. With this, the Light Warriors embark on a quest which where they will seek to restore the light to the orbs of Earth, Fire, Water, and Wind they carry, and thus put an end to the decay of the planet.

The first Final Fantasy game uses a battle system with rounds. Each hero and monster takes one action per round. Order of actions is determined randomly as opposed to being based on speed.

Final Fantasy has quite an arbitrary damage system. Damage dealt by basic attacks depends on the strength of the attacker, the defense of the target, the number of hits, and whether or not there was a critical hit. During most of the game, you can expect to be getting 2 or more hits on most of your attacks, and missing attacks rarely happens in the later points of the game. The Hit% rating on the status screen can be misleading because a Hit Rate of 45% would sound like you’d usually miss, when in fact you can usually count on getting 3 Hits most of the time. Damage dealt by magic can be unpredictable. Each attack spell has three different damage ranges associated with it. For example, FIR2 does less than 30 points of damage to enemies strong to fire, between 30 and 120 to enemies with average resistance to fire, and anywhere from 45 to 180 points to enemies weak to fire.

Spells are purchased in Final Fantasy. Spells are divided into 8 levels. High level spells cost more to learn, and cannot be used as frequently as lower level spells. Characters in Final Fantasy don’t have a single MP quantity, but rather, they have MP for each spell level. Max MP is determined by the character’s class and level. Casting a spell costs 1 MP from the remaining MP of the spell’s level. For example, a level 6 Black Mage’s MP meter looks like this when full:

Most of the important events, battles, and items in Final Fantasy are in the game’s many caves, dungeons, and castles. Final Fanatsy has many specially themed dungeons and caves. For example, the quest to restore the fire orb takes place inside a volcano, and inside are many fire breathing monsters.

Final Fantasy isn’t especially difficult, although there are some hard parts. Most fights, even the boss battles, are over after a few rounds. The difficulty of Final Fantasy lies in surviving in the dungeons over the course of many fights. Since dungeons don’t have save points, it makes long-term survival harder.

The graphics in Final Fantasy are subject to the limitations of the old standard NES. While not in battle, the backgrounds for the world, the towns, and the dungeons feature decent artwork, but they don’t have as realistic of an appearance as later Final Fantasy games due to the lack of available colors. Still, the oceans, deserts, forests, fields, rocky cave floors, lava puddles, towns, castles, and buildings maintain an image of a beautiful fantasy world. All sprites on the map screen are one screen block in size.

In battle, the screen is divided into several sections. One section has a small picture of the terrain the battle is taking place on, and the others are black fields containing text or characters. Although most of the enemies lack an imposing, lifelike appearance due to limited color and resolution, there is definitely some great monster art in this game. Enemies like old sorcerers, giant lizards, and club-swinging ogres from Final Fantasy were some of my favorites in terms of artwork. However, none of the enemies have any animation for their attacks.

The sprites used for the heroes are smaller than the enemies, and are a little blocky and pixelated. When one of the heroes attacks, there is a small amount of animation, usually limited to the character taking a few steps forward, and then swinging a weapon, casting a spell or using an item. Spell effects are limited to small beams and waves accompanied by flashing lights. When heroes are affected by any action, such as being attacked or having spells used on them, they flicker. When enemies are affected, a kaleidescope-esque single color popping and swirling pattern appears on them for a brief moment. The battles are understandable, but the graphics don’t really bring a sense of combat to life visually. It looks less like a fight because you don’t really see the heroes and the enemies all in the same place.

The musical score of the original Final Fantasy, like the graphics, is subject to severe technical limitations. The composition of the songs was very good, but the audio lacks the realism made possible by digital sound processing used in later consoles. There are a few nice melodies in this game, and longtime gamers may get a sense of nostalgia from the music. I describe the music in FF1 as “simple yet elegant”.

Final Fantasy has a fairly simple set of sound effects. The only sound effects that are related to things happening to the characters are those for opening doors, casting spells, and hitting the enemy. The rest of the sound effects are for things like moving the cursor, opening text windows, getting items, and other sounds for video game related things.

One of Final Fantasy’s strong points is its replay value. After completing the game once, it can be fun to go through again using a different team of heroes. The party recommended for first timers consists of a Fighter, a Black Belt, a White Mage, and a Black Mage, but the most fun I’ve ever had with Final Fantasy was when I played through with four Black Mages!

Final Fantasy is a fine example of an old, 2-D RPG. If you’re looking for solid RPG gameplay with plenty of places to explore, items to find, and legends to learn, as long as you don’t mind the old school graphics and audio, check it out sometime. It’s available at most used game stores, and will probably cost $20-$35.