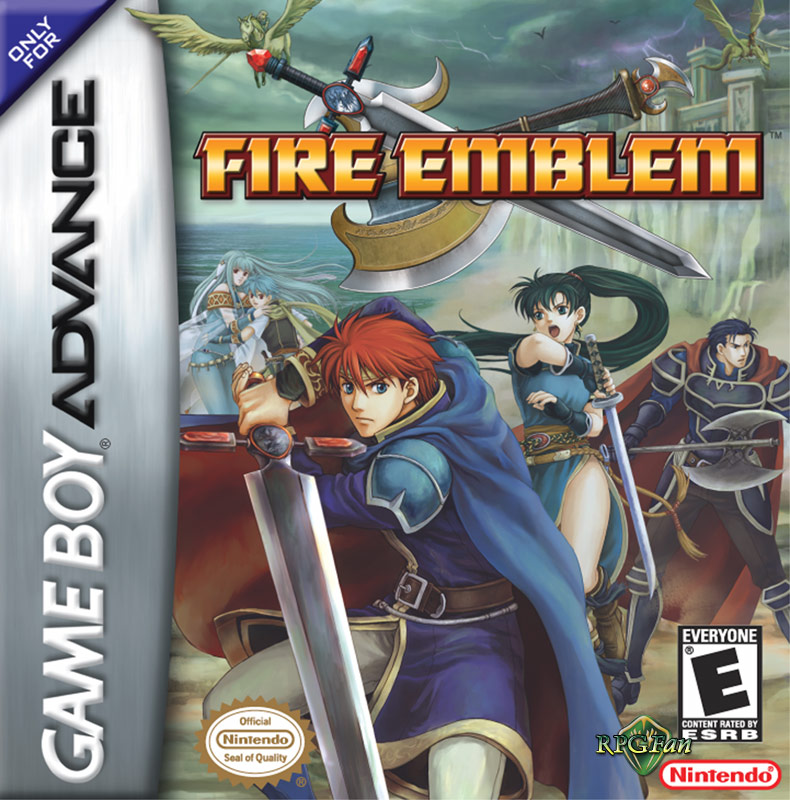 Fire Emblem: Rekka no Ken (The Flaming Sword) marks the 2nd GBA entry by Intelligent Systems to expand the popular Fire Emblem series. Set a number of decades before the previous game, The Flaming Sword marks the first instance where there are multiple scenarios with different hero(ine)s.

The first hero character is Lyndis, whose scenario is meant to be more of a tutorial than anything else. The player will control Lyndis in the first 10 maps to help prevent her uncle from murdering her father.

In the second scenario, the main story begins. The player will take control of Lord Eliwood who, with his best friend Hector, will search for his father who has been missing for over a year. It is during this quest that Eliwood learns of a conspiracy between various nobles to take over the continent – a conspiracy of which his own father may be a part.

Despite the apparently grand plotline, the story of The Flaming Sword is definitely the biggest weak point. It is unlikely that the player will be intrigued by the game’s decidedly run-of-the-mill storyline and weak characterizations. While the 20 characters that can be recruited do possess a level of personality, none are developed to a significant degree.

However, in order to attempt to facilitate character growth, the game incorporates a feature known as the “Friendship System”. Under this scheme, certain characters will grow fonder of each other when they are kept within close proximity on the map. Establishing friendships will trigger a number of minor events throughout the game, but I personally felt that most of these events lacked the impact that they could have had due to their brevity and failure to develop the characters at all. However, fostering friendships does have the practical effect of giving temporary stat boosts whenever friends fight nearby, so it is still a worthwhile endeavor.

The gameplay of the game itself has not been touched at all since the last Fire Emblem game. In each of the games in the series, combat is carried out in a style similar to Shining Force or any other strategy RPG. The twist, however, is that once a unit dies, it is gone forever. This single point is what makes Fire Emblem both fun and challenging.

Unfortunately, the difficulty of The Flaming Sword has been reduced significantly when compared to the previous games. While the last few stages do offer a hearty challenge, a Fire Emblem veteran will have no problem breezing through the game on his or her first attempt. Thankfully, beating the game once will unlock both the Hard difficulty level as well as a third, more challenging scenario starring Hector, which gives this game more replayability when compared to its predecessor.

There is, however, a catch to this. Not only is Hector’s scenario only modestly different from Eliwood’s, almost all the dialogue is the same as well. The only significant difference is that there are about 3-4 new maps. Not only that, there is a marked lack of hidden maps and alternate endings as well. While it was required to fulfill a number of quests in order to receive the true ending to The Sealed Sword, The Flaming Sword follows a rather linear path from start to finish.

Much of the music in The Flaming Sword can be described as good, but repetitive. While I rather liked most of the BGM songs in the game, there is too little variety to make me want to keep hearing them over and over again. In fact, some of the songs can be aggravating after a while. I found myself playing the game with the music turned off after the first few hours.

The button layouts are rather intuitive and are pretty standard fare for the game of this type of game. In addition, the provided button shortcuts are useful to quickly assign orders and end the turn. Perhaps the best part of the interface of The Flaming Sword is the extensive help feature, which will indicate the purpose of each skill, and also how the statistics on each character will affect them in battle.

The Flaming Sword is another solid offering from Nintendo/Intelligent Systems. While it does not really make any improvements to the Fire Emblem formula, it is easy enough for the casual gamer to play without getting too frustrated, unlike the previous games. Given eminent US release of the game, I can only hope that The Flaming Sword sells well enough to warrant the localizations of all future incarnations of this excellent series.