[Birthright] succeeds Awakening as the new benchmark for the series and will no doubt shape future installments for years to come. 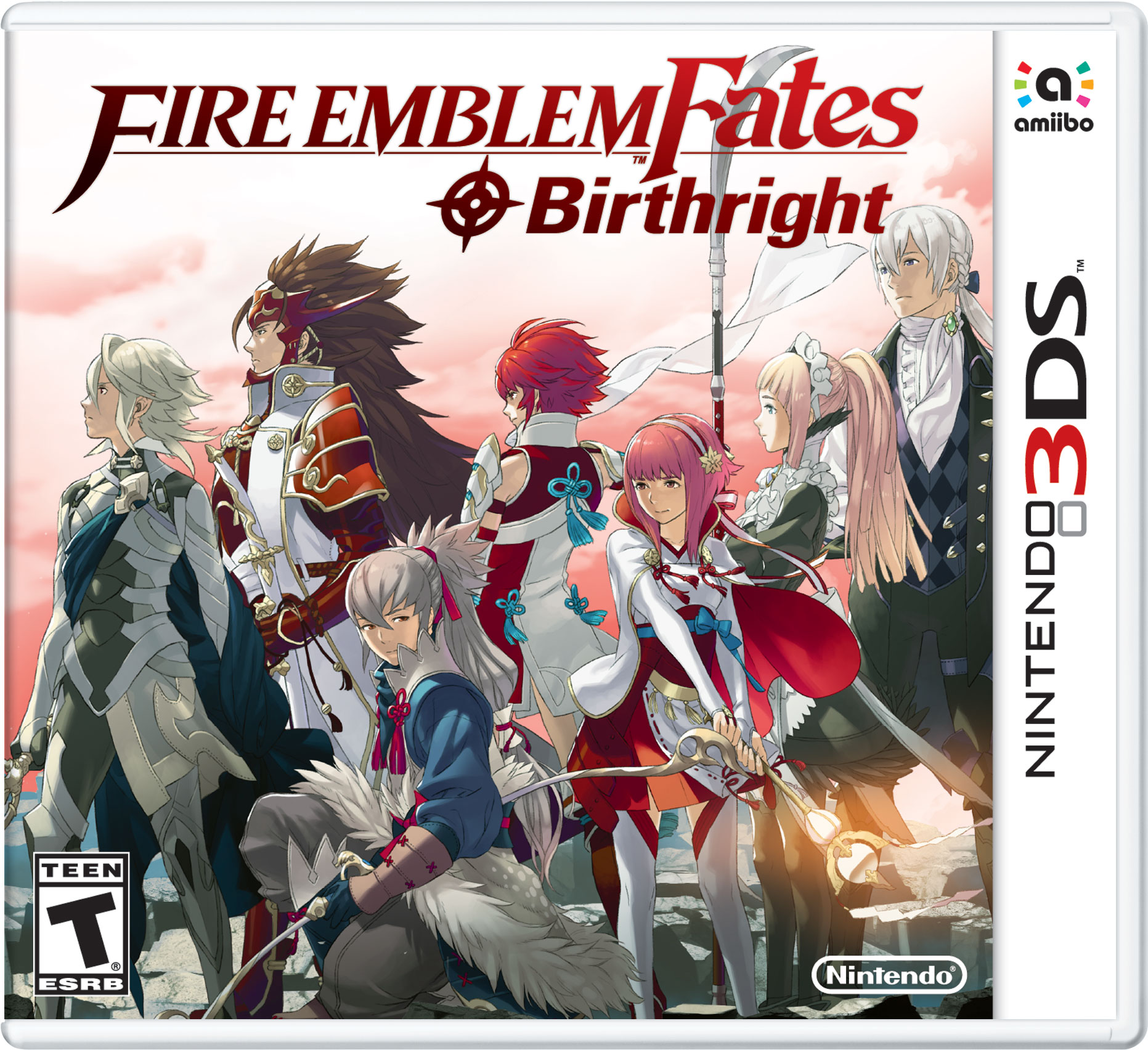 If you had told me back in 2013 that we’d have three new Fire Emblem games by 2016, there would no doubt have been some hysterical laughing on my part. I’d been repping blue-haired swordsmen for years at that point and knew all too well that the series was on wounded knee after the DS entry Shadow Dragon was met with auditorium coughs and crickets upon release. Western territories didn’t even see the 2010 sequel Shin Monshō no Nazo ~Hikari to Kage no Eiyū~ and it’s not like the Radiant duology before it drove home console sales either, so to think that Awakening — the unfortunately numbered 13th game in the series, mind you — would save Fire Emblem from itself was, again, pretty laughable.

But in one of the great Hail Mary passes of this generation, Awakening became a global smash-hit and completely rejuvenated all interest in Fire Emblem. Never mind that the IP had struggled with commercial viability in west right from the get-go. Pay no attention to the fact that Awakening was originally conceived as a swan song to bookend 20 years’ worth of beloved games. No pressure. And let’s not forget the harrowing prospect of alienating O.G. fans by defanging the series of its most damning, yet charming game mechanics. Awakening somehow took all the right risks and still delivered on all fronts, and then some!

So here we are in 2016 with Fire Emblem Fates: Birthright, Conquest, and the third DLC entry Revelations, all of which have been created in Awakening’s brave image. Birthright bears the most resemblance to its predecessor and inherits much of what resonated with audiences three years ago while making even more sensible tweaks here and there to create arguably the most refined FE experience to date.

All three versions share the same top-down, turn-by-turn battles and social elements we’ve come to expect from Fire Emblem, but there are noticeable differences within each path that vary greatly from one to the next. As mentioned, Birthright has been modeled after Awakening more than its siblings, especially when it comes to overall structure and gameplay accommodations. This mostly boils down to straightforward mission objectives (Rout the Enemy, Defeat the Boss, etc.) and the ability to grind skirmishes for a small fee in between story chapters. Conquest, on the other hand, takes the polar opposite approach in both regards and thus is better suited for folks who have fired emblems in the past. Outside of this, however, version differences mostly pertain to narrative content, maps and locations, and obtainable units.

Manning the game’s scripting duties is famed Japanese screenwriter Shin Kibayashi, known for his work on a number of popular anime and manga series. In Birthright, he tells a nuanced story that’s a slight departure from previous installments, though nothing too dissimilar from what fans are accustomed to: A rag-tag brigade of rebellion fighters clash swords with an imposing army led by a power hungry king, some globe-trotting escapades ensue, suddenly dragons, so on and so forth. At the center of it all is the player’s avatar, whose moral compass guides them throughout their 30 some-odd hour journey rather than the dogmatic loyalties forged during their upbringing as Nohrian royalty, eventually giving rise to their role within the rivaling Hoshido kingdom. Story-driven players will certainly encounter compelling plots and themes here, but there’s also no denying Birthright ultimately takes a few cues from its ancestors’ adventures.

Frankly though, I’d wager most folks won’t even care if Birthright’s story feels a teensy bit familiar at times, because Hoshido is anything but a familiar place as far as Fire Emblem games go. The Edo-inspired kingdom and its neighboring lands are meticulously rendered from top to bottom and especially so during the heat of battle, when the camera zooms in on combatants. Set pieces shown on the grid view are now reflected when units engage in battle, and while this sounds like an inconsequential bit of continuity between gameplay perspectives, it really does bolster the immersion factor a great deal. I wanted to see every inch of these battlefields, because they’re no doubt among the series’ most imaginative. From gondola-filled waterfront opera houses to glacier villages at twilight, from interlocking vessels on the high seas to mountain top dojos nestled far above the clouds, Birthright is a breath-taking spectacle of exotic sights that you just won’t find anywhere unless you count its companion versions, which offer entirely different maps all together.

Another high point of Birthright is its clever interplay between combat and social aspects. There’s now more incentive than ever to pair up units during battle, since support conversations affect a character’s ability to be reclassed. Once two units hit a max level support (S for love interests, A+ for best friends of the same gender), these partners gain access to the other’s respective base and master classes, opening up a huge breadth of unique skills and growth rate to units that would otherwise be locked in to a scant few. This mechanic feels like such a natural extension of two long-standing FE systems that it’s hard to believe the series went all these years without implementing its design sooner, but here in Birthright, it works so seamlessly that it makes youthful classics like Path of Radiance and Sacred Stones seem downright antiquated in hindsight.

Barring staves/rods, Birthright throws equipment durability out the window. As someone who knows his blazing knick-knacks, I was really surprised how little I missed this particular mechanic. There were times early on when I longed for the tension it added to each encounter, but that sentiment quickly dissipated once the intensity ratcheted up around the mid-to-late chapters. Now each weapon is wholly viable, and that includes starter equipment. Weaker weapons net passive buffs like increased dodge or crit rate while stronger ones deal more raw damage at the cost of reducing the wielder’s innate stats for a turn or two. That said, part of me wishes the devs had included an option to switch between the two styles so I wouldn’t have to always opt for convenience over a nostalgic challenge, but again, I did really enjoy Birthright’s new take and it never seemed to compromise the game’s difficulty.

Outside of all these changes, there’s a number of new features in Birthright that both newcomers and long-time buffs are bound to appreciate. Beginners will love the inclusion of Phoenix mode, where units reappear instantly upon death. It removes the game’s infamous permadeath mechanic, but is perfect for maxing out each and every support. My Castle overhauls the Barracks from Awakening and adds a whole new dimension of town-building customization to the series. Here, players construct shops and other amenities (steamy bathhouse, anyone?) to frequent between battles as well as converse with units for small relationship boosts and/or temporary stat gains. There are also online features that can be accessed within the castle walls, including the option to visit or invade another player’s fort. Successful invasions even reward players with the option to buy skills off their opponent’s units, provided both sides have the same character, which sure beats yesteryear’s alternative of tediously leveling up and reclassing for the same results. These optional features are supplementary to the main quest, but are nevertheless excellent additions that bring out the best in Birthright for those looking to get the most out of their time in the Hoshido kingdom.

The last thing worth mentioning is the game’s localization, and no, not the removal of Marth-Amie — er, I mean, the character petting mini-game. No, I’m talking more about the strength of the localization’s writing. Coming off the high that was 8-4’s legitimately hilarious work on Awakening, Birthright falls a bit flat in the humor department. In a sense, bringing Kibayashi on to weave his magic into the world of Fire Emblem seems to be a mixed blessing: The Fates storyline does inject some refreshing ideas on family and morality into the two-decade-old series, but too often relies on the tropes and archetypes native to Kibayashi’s preferred mediums.

This in itself isn’t a problem, but when you’ve got a cast of tsunderes to ninja maids and everything in between, it’s best to add something to their respective personalities to differentiate them from all the other stock characters out there. As Awakening fans know, 8-4 managed to circumvent this archetype problem by taking creative liberties to introduce a healthy spread of amusing quirks, running gags, sharp wit, and awful puns that were nowhere to be found in the original Japanese release in order to make each character stand out on their own (Henry says hi). With Birthright, it feels like the localization team stuck so closely to Kibayashi’s vision that it bottlenecked obvious opportunities for added flavor, and the times where liberties were taken feel forced or just not enough. Of course, people’s experience with this will vary considerably, but I, for one, didn’t latch onto any of Birthright’s characters like I did in Awakening, which is a shame because I much prefer Birthright as an overall package.

Born into this world with the privilege of its forebear’s legacy to inform its very own, Birthright certainly befits its namesake. It succeeds Awakening as the new benchmark for the series and will no doubt shape future installments for years to come. There’s an embarrassment of riches here from its sky-high production values to the masterful gameplay refinements that are so effortless in their execution that it’s hard to fathom another entry ever usurping Birthright, but, then again, I remember thinking the same thing three short years ago. If you have so much as an iota of interest in Fire Emblem (or blue-haired swordsmen), you’d be crazy not to pick this one up. It belongs alongside not just the series’ classics or the upper echelon of the 3DS’ RPG treasure trove, but among the esteemed company of Nintendo’s finest — it doesn’t get much better than this, people.

Familiar narrative, localization isn't quite on par with Awakening's.

The most impressive refinement of Fire Emblem to date, this game belongs in everyone's 3DS.