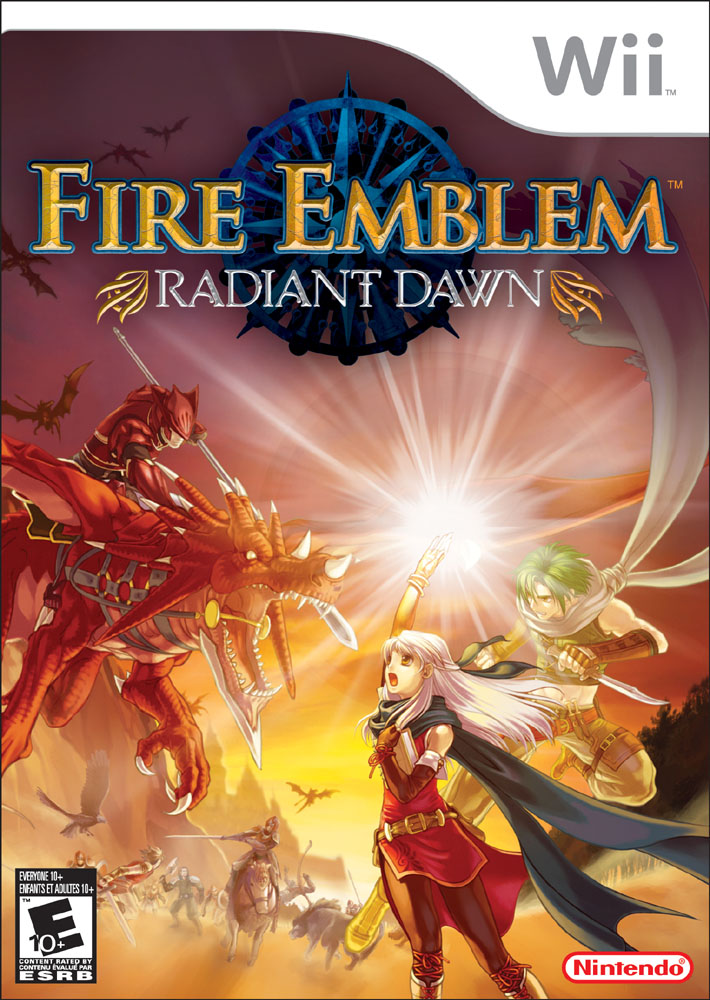 While I have been playing strategy RPGs since the days of the original Shining Force and Ogre Battle, I, like so many others, was deprived of the Fire Emblem series’ release into the United States. Fire Emblem: Radiant Dawn, a direct sequel to the Nintendo GameCube title Fire Emblem: Path of Radiance, is the tenth iteration of the series and the first I have had the privilege of playing. What the game definitely lacks in terms of graphical prowess, it makes up for in the sheer genius of its battle system. While this is not the best strategy RPG I’ve ever played, it certainly dethrones Super Paper Mario as the best RPG experience on the Nintendo Wii.

For a first timer to the series and as someone who missed out on Path of Radiance, the plot was hard to become immersed in at the get go. The narrative opens three years after the Mad King’s war on the continent of Tellius. Daein, the instigator of the war, is in shambles after losing to rival Crimea, who is still ruled by Queen Elincia. Because Daein has failed to explore its rule of proper succession, it becomes occupied by another neighboring power, the Begnion Empire. Throw in a classic tale of racism, betrayal, manipulation, avarice and ambition and you have one heck of an intriguing story.

Even though the story is fascinating as an overall arc, including tremendous shifts in perspective from chapter to chapter, a newcomer to the series could simply give up after a few battles. Because this is another strategy RPG that features a war-like environment between two nations and fails to delve into rich character development of so many of its key members, the player is often lost with whom each person is and what their motivations are behind each action. With all of that said, it is a direct sequel and playing the GameCube title should clear up some of the confusion. In addition, a repeat play of this title should allay any murkiness that exists after the first five hours or so. I encourage patience if you are a new player because the second half of the game is some of the most fun gaming I’ve had in years.

What keeps you coming back to your system to play your RPGs? Is it an obsession with collecting items? Is it a dramatic storyline? Is it puzzle solving? Though I consider all the previous rationales sound, nothing gets me more fired up than fun, intense, and challenging gameplay. I began the game on the “normal” difficulty level, thinking I would breeze through the game and pick it up as I went along, which is what I generally do for every game. After getting knocked out repeatedly in some of the first few battles, I thought to myself, what the heck is going on? I’m not ashamed to say that I restarted the game, dropped the difficulty down to easy and you know what, I still had characters die from time to time. This challenge was amazing, but fair. Unlike some brutally hard and unfair games I’ve encountered in the past (Seventh Saga, anyone?), this game was just. By about the 15 hour mark, I started to figure out how the game truly worked and can’t wait to restart it again at the normal level just to see how far I’ve come.

For people like myself who are new to the series, let me take a moment to explain the gameplay. The battle system is a traditional grid based strategy RPG with alternating turns. There are bonuses or deductions for the standard fare including certain elevations and land terrain, as well as attribute bonuses for certain character relationships (the stronger the bond, the higher the bonus). Levels are gained for every 100 points and weaker characters gain more experience points based on how weak they are in comparison to their enemy. Character classes are many and range from the classic (gold knights and paladins) to various types of the shapeshifting animal race (the Laguz). The key factor that makes Fire Emblem unique is that once a character dies on the field, that member is gone for the game. That’s right. Dead. Finito. There are no “raise” spells or ways to bring that character back or even a certain amount of turns that character can endure while being dead (Final Fantasy Tactics). This is one of the best gameplay elements for a strategy RPG to have and one of the reasons I hit reset so many times. If you make one careless move at the end of the battle, you’ll be playing the whole battle over again.

Even though the battle system is flawless, the rest of the gameplay is mediocre: I found the post-battle situations to be boring, the weapon synthesis system was extremely trite, and there were no sidequests or bonus missions for the obsessed gamer to be on. One of the current strategy RPG conventions I loathe also appears in this game (also seen in Luminous Arc as well as others), and that is the “info” screen. While it carries many names in its many forms, the “info” screen is a way for you to witness three different character interactions (sometimes more of less) and watch a bland conversation that really doesn’t add much to the overall experience. More important conversations carry three stars, which mean that you receive an item at the end of the talk, while others are one or two stars and you can skip them if you don’t care. With no towns to explore, no villagers to interact with, and with nothing outside of the main storyline to investigate, the perfect battle system is marred by the lack of other gameplay elements.

Fire Emblem: Radiant Dawn is a game that was ported over from the GameCube and graphically it shows. Because I am an “old school” gamer, this lack of a true next generation feel does not bother me, but it definitely will to some gamers. In fact, if you eliminate the battle animations and keep them to the world map (a move I recommend in order to save time), the only solid graphics appear in a few cel-shaded FMV cutscenes. These, which appear few and far between, are truly a joy to watch. The one that includes the reintroduction of Ike to the player was the graphical and narrative highlight.

The score and sound of this tenth edition of the Fire Emblem series is memorable and engaging. Yuka Tsujiyoko, known for her work with the Fire Emblem as well as Paper Mario series, delivers a soundtrack that sticks in your head for hours. In addition, the sounds in battle are crisp and delightful. If the game utilized more cutscenes, I believe Tsujiyoko would have been able to show off her talent even more dramatically. Regardless, the sound is a solid part of this title.

For whatever reason, critics think that every Wii title should have motion control and I just don’t believe that to be the case. This game is perfect example of how I would argue that the controls were almost perfect, while others have given the game negative scores because of the lack of utilization of the Wii remote. Like some other Wii entries, this title allows you to choose from a variety of control schemes including: Wii remote horizontal or vertical, classic controller, or even the wavebird. I tried a variety of these methods and found that the classical controller fit best for me but encourage you to try out your own. I only had minor complaints of the controls including accidentally and frequently skipping dialogue by hitting “b” on the classic controller until I fully picked up the controls. All in all, though, the controls were intuitive and worked extremely well.

As you can clearly see from my scores, Fire Emblem: Radiant Dawn is not only one of the must own titles for the Wii, but for RPG fans everywhere. If you can stick with the story and appreciate the difficulty of the game, you’ll be, like me, a repeat player of this title. Depending on how you set your animation sequences and game speed, this title can range from 30 to well over 50 hours. Even though this is not the definitive strategy RPG of our time, like some have labeled games such as Shining Force, Final Fantasy Tactics, or Disgaea, it’s pretty damn close.