While many are touting Foregone as a Metroidvania, it’s much closer to a linear action-adventure side-scroller. 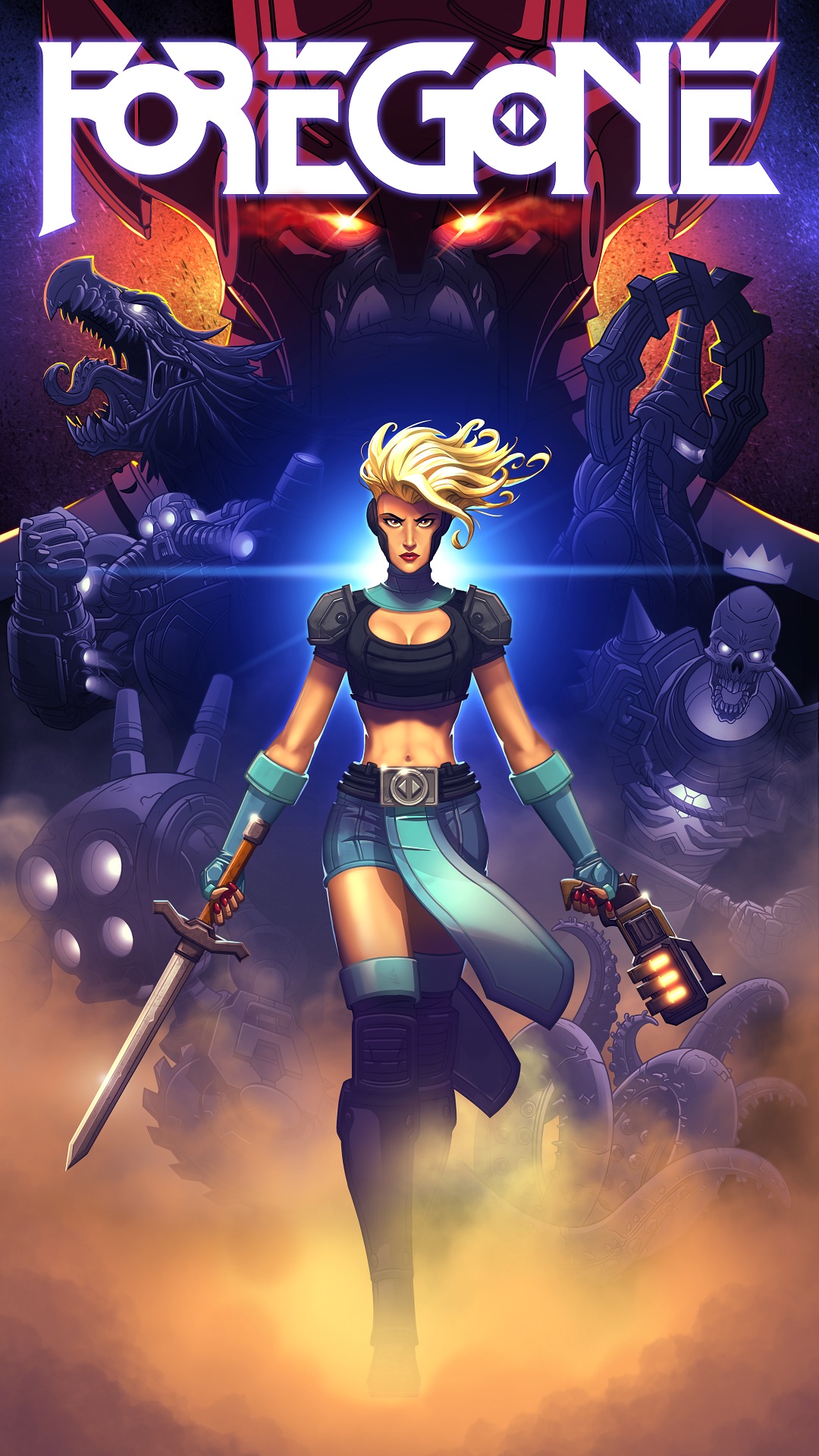 There is something to be said for a good, solid platformer. Today, it seems like we expect all of our games to be genre-defining classics, but sometimes you just want to run, jump, and beat up enemies with a shotgun-modded pair of nunchucks!

In Foregone, you are the Arbiter, a super-soldier who is the last hope in the war-torn city of Calagan. A force known as the Harrow is sweeping across the land, raising and mutating the dead to destroy the living. The only way to save the city is the fight your way through hordes of the undead to discover the source of the Harrow and defeat it.

While many are touting Foregone as a Metroidvania, it’s much closer to a linear action-adventure side-scroller. Yes, you can backtrack to previous areas to find missed upgrades and secrets, but these are all optional. Everything ahead of you overshadows what you’ve left behind, limiting your motivation to go hunting for now-underleveled hidden loot or unnecessary upgrades to old abilities. Level design also rarely inspires exploration, rather driving you from point A to point B with its series of combat encounters.

The substantive gameplay here comes from the combat and the loot system. As you defeat enemies, they drop weapons, armor, accessories, and rings at varying levels of rarity. The vast majority of your accumulated loot is pure junk, but you will occasionally find rare items with extra stat bonuses attached. The higher the rarity of the item, the more you can upgrade it. You have a limited inventory, so regular trips back to town are necessary to unload your useless loot at the store, giving you the money needed for further upgrading your gear.

Upgrading your loot in Foregone involves fighting your way through special challenge stages, each with a specific objective. Perhaps you need to navigate your way through a stage full of tricky environmental hazards. Or maybe you must defeat a level’s worth of enemies within a time limit. At the end of each challenge level lies a randomized piece of rare loot and an NPC who will upgrade your weapon, armor and accessories for an ever-escalating price. These challenge levels are not only fun, but they also help you hone your combat abilities.

And believe me, you will need to hone your skills if you want to overcome the bosses at the end of each stage. Like all well-designed bosses, they are “tests” of the skills and abilities you’ve accumulated thus far in the game. If you haven’t perfected your dodging and combat combos, you might be in for a tough time. In more challenging difficulty levels, mastering these abilities becomes paramount to defeat the bosses, as trying to brute force your way through will only result in death after death.

Speaking of death, you will lose all of your gold and XP after dying, which you can recover if you return to the site of your untimely demise. Alternatively, you could also pay an ill-defined grim reaper-esque character in town to insanely recover half of what you lost. It’s rarely worth it in normal difficulty, but in more challenging difficulties, it’s more of a “deal” as trying to recover your lost gold/XP could result in you losing everything if you die again.

There’s no shortage of combat options with the loot offered in Foregone, but I found the most compelling tool in the Arbiter’s arsenal to be her signature weapon, the gunchuck. Recalling the absurd silliness of the gunblade in Final Fantasy VIII, your gunchucks offer you the best of both worlds: you can bludgeon your enemies to death while simultaneously blowing them away! Along with the gunchucks, you may find slow but powerful broadswords, lightning-quick daggers, and far-reaching spears. I highly recommend trying all of the available weapons, as each one dramatically changes how you approach combat situations. A close-to-impossible situation can become a fun challenge by changing up your weapons on the fly rather than stubbornly sticking with your favs.

Alongside your melee weapons, you also have your choice of several firearms, including handguns, bows, and (my favorite) shotguns. Your guns have limited ammo and you must engage in melee with enemies to “reload.” This creates lots of opportunities to customize your attack style. Do you want to soften up mobs of enemies with your guns, then finish them off with your sword to reload? Or would you prefer to finish off some of the stronger enemies from afar, then reload by beating the heck out of the weaker ones? The choice is yours! I also love the fact that the bodies of your enemies don’t fade away after you’ve defeated them. Seeing the evidence of your carnage trailing behind you gives your actions an extra weight.

Though touted as a narrative-driven adventure, the story of Foregone isn’t anything special. The majority of world-building is revealed through reading diary entries littered throughout the levels, but this minimal environmental storytelling only hints at a potentially complex and compelling plot. NPCs in “town” are paper-thin, providing no characterization aside from some generic dialogue as you upgrade your skills and sell your inventory. Though the story starts to pick up in the last area, by that point, it feels too little, too late. Unfortunately, the big plot reveals in the final level fall flat because the Arbiter’s story and personality haven’t been developed enough for us to care.

Graphically, the game is absolutely beautiful. As a pixel art fan, I’ve always found something stunning about the juxtaposing “blocky” graphics with incredibly fluid animation. Foregone also excels in its sound design. The boss themes, in particular, are unique and pulse-pounding, setting the stage for some challenging and enjoyable combat! The minimal voice acting is of similar quality; however, there is so little that it doesn’t do much to enhance characters.

With stunning pixel-art graphics, solid combat, and a considerable amount of character customization, you can easily sink a few hours into Foregone, maybe more if you delve into more challenging difficulty levels. However, if you’re looking for a complex Metroidvania full of backtracking and deep lore, I would look elsewhere. Foregone may have left me feeling a bit cold, but if you’re looking for some straightforward side-scrolling action, I suspect it will nicely scratch that itch!

Foregone is a solid choice if you're looking for a side-scroller to scratch that run/jump/attack itch!