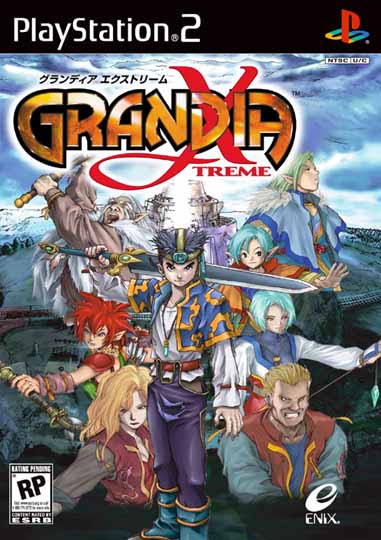 I remember, about a year ago, becoming incredibly excited when I first heard the news of a new Grandia game. Yet at the same time, I felt fear. I mean, Game Arts, as far as I could remember, never released RPGs in such quick succession before… is that lack of time going to affect the game itself? Well, now that I’ve played it I can say that, without a doubt, YES.

I guess the biggest hint without even buying the game is the fact that the game isn’t named Grandia III, but Grandia Xtreme. Xtreme what, you ask? Ah, let’s take time to touch on each of the points.

Well, Grandia Xtreme’s back story sounds grandoise when you first hear about it. Spirits of the land have been running out of control for the past 50 years, destroying land and creating monsters to make the inhabitants of the world suffer. This situation gradually made the relations between the races deteriorate and a full scale war began between them, even as the spirits ran amok.

The game begins just as the races have reached a peace agreement and turn their attentions towards stopping the spirits from running out of control. This leads to the army enlisting (i.e. forcing) the help of the local Geomancer Evan in leading the party that will go into the various dungeons and turn off the device that is making the spirits go…you get the idea.

Throw in an evil scientist, the main character’s old rival turning out to be a commander in the army, and the usual hooplah about lost technology and you have a good idea about the storyline Grandia Xtreme has.

While the backdrop might not sound so bad, here’s the kicker. There are 2 towns in the game TOTAL, your party’s full pretty much by the second dungeon, there is no exploration aside from the dungeons, and next to no character development is present in the game. Does that sound like a winning strategy to you? Thought not.

There’s no mistake about it, Grandia Xtreme is a beautiful game to behold. While it certainly pales in comparison to FFX, it is much more detailed and sharper than RPGs from previous generations’ RPGs. Each of the characters is well animated as well, and there are a lot of objects in towns that you can manipulate, which you can always get a kick out of. Even the FMV scenes are well done. It’s just too bad that the graphics only highlight the game’s failure in other areas rather than hide it.

Let’s get the sole good point about Grandia Xtreme out of our way right now: the battles. The battle system’s been revamped to the point that it is one of the best ones out there. It’s an advanced version of Grandia’s active-wait system where you have your usual choice of combo attacks (hits twice for average damage) and critical attacks (hits once for high damage), and if you time your attacks properly you can even cancel the enemies’ attacks. In addition, high combo attacks have slight damage modifiers (+6%, +12%, etc), making them very desirable for use against bosses.

There are even special combination attacks that you can unlock by having different characters attacking at the same time, and each character is more customizable as well, since you have freedom to equip whatever spells (via Mana Eggs) and skills (via Skill Books) to any character you have in your party. Grandia Xtreme also boasts a Mana Egg combination system where you can go to a spell shop and combine two Mana Eggs to create a different, more powerful one.

Though the battle system is admirably done, the dungeons are another matter. They’re too big, too littered with enemies, and the distance between save points is too far apart to make any gaming session under an hour feasible. The bosses are very tough as well, which is usually something I don’t mind, except in Grandia Xtreme you usually can’t save before you fight them, so if you do lose a boss battle, you’re back an hour or two in terms of progress. An Xtreme idea indeed.

The control of Grandia Xtreme for the most part, is pretty standard. However, there are two things that totally kill it. First is the horrible, horrible, horrible, horrible camera angles used in the game. Although you can rotate it around to your liking (but not if you’re using a PS1 controller, which was what I was stuck with), having it do it all the time is a really big pain. I wish they had an ‘active’ camera that’d automatically change the angle so that the characters are actually visible, but I guess we can’t have everything.

Another annoying thing about Grandia Xtreme’s control is that it has poor collision detection at times, particularly during the numerous ‘moving platform’ puzzles that they like to throw in during dungeons. What would often happen is that you move over the next platform on time, but the game refuses to let you cross (you literally see the characters walking in place), and so you fall to the pit, where you must battle monster after monster until you work your way back up the dungeon and try again.

Iwadare returns to lend a hand in Grandia Xtreme, and while the battle and boss music is nicely done, the majority of the soundtrack is pretty average, with nothing really worth mentioning. And of course, the background music during dungeons are sure to get on your nerves sooner or later, given you’ll be spending 99% of the game listening to it.

I never thought that I’d say this about a Game Arts game until now, but I’m really disappointed on how Grandia Xtreme turned out. A lot of this was probably due to me expecting something more than a dungeon hack when I plunked down the $63 to buy the game. While RPGs that concentrate solely on battles were fine with me when I first started getting into the genre, my tastes have now changed, and I now want an interesting story and likable characters to keep me playing, not the ability to return to a dungeon and fight tougher enemies. I’m sure people whose sole reason for playing Grandia I and II was for its battle system will enjoy Grandia Xtreme, but for the rest of us I think we’re better served by waiting for the next big RPG release (read: Xenosaga).