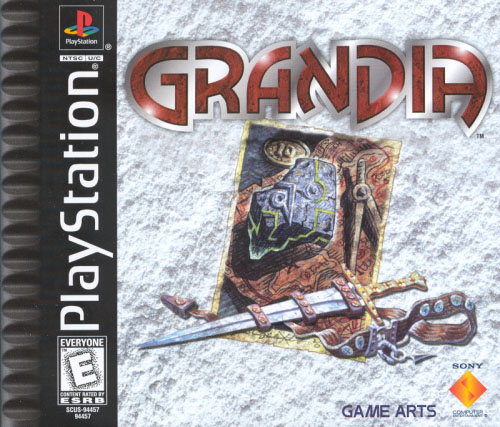 Grandia proves to be a fun RPG that doesn’t excel at any one area, but is well rounded and simply entertaining.

The game focuses around Justin, a young man with one goal in life: to become an adventurer, just like his father. His father was an adventurer, and left him his most prized possession: supposedly a piece of the mythical Spirit Stone talked of in legends. With his friend Sue, his goal is to discover the secrets behind the ancient civilization of Angelou, and to become a full-fledged adventurer in the process.

For much of the game, Justin’s efforts to discover the secrets of Angelou form the basis of the plot, as he explores distant ruins, towns, and meets interesting people and cultures. It’s a fun change from the normal RPG plot, and it doesn’t take itself too seriously. Even towards the end, as Justin’s goals shift, the game remains generally light-hearted and upbeat. It’s refreshing to take an RPG that could be highly serious, and have it be a lighthearted game.

This is due largely in part due to the characters. They’re not exceptionally well written and there aren’t too many surprises about them — anything that could potentially be surprising is generally telegraphed well ahead of time, and it’s not difficult to figure out the direction that they’re heading in. Moreover, none of the main characters seem new — there’s certainly some interesting supporting characters, but you’ve got the enthusiastic youth, the warrior seeking to better himself, the soldier who’s trying to do the right thing, and so forth. They’re clichés, certainly, but they do work within the context of the game.

In the end, Grandia isn’t a game you’ll play for the plot — at least, for the majority of the game — but it doesn’t really detract from things either.

The graphics are certainly a bit dated, but pretty nice. The mix of polygonal backgrounds with sprite characters works well, and nothing seems truly out of place. Very few locations look the same, despite some common themes — ruins look different based on the former inhabitants, outdoor areas vary widely in their looks, and so forth. The locations themselves are highly detailed, with many little touches that reward the curious and persistent gamer — many objects can be manipulated, even if they don’t do anything useful. Environmental effects such as rain and mist help add to the ambiance, and trees and other portions of the environment help create mazes that are fun to explore.

Battle graphics are nice as well. The battlefields are not as detailed as the rest of the maps and are sprite-based rather than polygonal. Enemies and characters are well animated, with a variety of animations for different attacks, movement, and so forth. One complaint is that the number of types of enemies is actually quite low for a 32-bit RPG — there is a lot of palette swapping going on, to the point where even bosses are palette-swapped several times. A lot more variety would have helped greatly.

The animation of spells and special moves is nice. It reflects the power of the move: a simple Burn spell is nowhere near as impressive as a BurnFlare, and so forth. There is a bit of palette swapping for a few special moves as well, but it’s not as prevalent as with the enemies. Fortunately, the spells are kept relatively under control, and the longest runs for only about 30 seconds, so the flow of battle isn’t disrupted too much by spell casting.

A few anime scenes occur throughout at important points. They’re pretty nice in quality, and help give a better sense of the world. I wish they were played at a higher frame-rate, but that’s just nit picking on my part.

Music is perhaps the weakest component of the entire game. It’s not that it’s bad; it’s just not good. The only song that I made a deliberate effort to listen more to was the title song. Usually when I play RPGs, I come away with at least one or two songs that I want to listen to outside of the game, but Grandia just didn’t do it for me. The songs don’t seem to last for very long before repeating, which doesn’t help the situation — even the most memorable short songs, when repeated often, lose their charm. I even ended up listening to different music a few times I played — which I very rarely do. On the bright side, there are a variety of battle themes, for normal battles, ambushes, and several for bosses — and they’re changed on the second disk. It adds some variety, but doesn’t help the overall situation.

Sound effects are passable. They’re not bad either, but they don’t do much — most spells of the same type sound alike — there’s not that much difference between the different fire spells. Weapons don’t sound particularly inspired either — basically one whip crack, one sword sound, etc.

The voice acting isn’t too bad. I’ll admit right now that I’m not that critical of voice acting, and I really can’t tell a “bad” dub from a “good one”. I didn’t really like the voice acting, because it seemed to disrupt the flow of the game (I like being able to zoom through the text), but I have no specific complaints about individual voices. Your mileage may (and most likely will) vary.

Fun for the Whole Family

The gameplay is probably the strongest aspect of the game, most notably the battle system. Overall control is similar to Xenogears, without the ability to jump — you’ve got your large, 3D maps and a rotatable camera. Control is responsive, however, which is important to avoiding battles (or getting into good position for them).

Once battle begins, your characters and the enemies are distributed around a circular battlefield. Distance does play a role, as characters can only go so far, and attacks have range restrictions. The battle essentially takes place in real-time, with pauses to select moves. Attacks take varying amounts of time to use — combo attacks are quick, critical hits take longer, and spells and special moves happen based on how much experience you have with them — mastered specials actually perform instantaneously, providing an extra incentive to work on your moves. The battles become somewhat strategic with the addition of the IP bar, which shows a scale of who is going to attack — and when — and by attacking enemies, you can stun them, preventing them from moving for a while (or at all). Of course, the reverse is true. It lends a great deal of strategy to an otherwise straightforward system.

Experience is gained, not only for each character overall, but for their abilities. Each time an element is used for a spell or attack, or a weapon is used, experience is gained. Every 100 points, an attribute levels up, bestowing statistic bonuses, and new moves and spells. While it can become tedious leveling up a character’s attributes to gain new moves (or to improve ones you already have), it’s a very basic system, and is elegant in its simplicity. Fortunately, the game lists the possible moves you can obtain, and what levels you need to gain them, so it’s not a matter of randomly guessing.

There are a multitude of other nice features that help the game. Each character can only hold 12 items, but when you pick them up, you can use them on the spot, removing the need to store them in a character’s inventory. When a character leaves the party, all their equipment is stored, so you don’t lose important items. Also when characters leave, part of their accumulated experience can be transferred to other characters, so your effort isn’t wasted. For the first part of the game, save points also give hints, which help new players understand the finer points of the battle and experience systems.

A major flaw, however, is the difficulty. If you choose to ignore the few optional dungeons, the challenge is very, very low. The primary reason for this is that at save points, you can restore your characters fully — and you can do it as many times as you want. Since monsters appear on the map itself, and only a finite number appear per dungeon, it’s quite simple for someone to use their most powerful moves with impunity — restoring their characters when needed. The problem is further complicated in that the vast majority of the bosses in the game have save points right beforehand — which means that most boss fights simply boil down to using your most powerful moves over and over. There’s little chance you’ll be weak from before, and since you can just go and restore yourself afterward, there’s no real reason not to unleash your full power. Healing magic and status magic is also generally worthless — most battles can be won quite readily with an all-out strategy, which is a shame — the combat system offers many more possibilities.

Grandia’s got flaws, but the major ones have already been enumerated. The problem with Grandia is that it could have been much more — a bit more polish, perhaps, would solve the problems. Giving the game some challenge would have helped immensely. A better soundtrack would have really added to the overall atmosphere, and some of the tedium of gaining experience could have been removed. It’s not that the game is intrinsically flawed — it’s that the individual parts could have each been improved for the better, and would have solidified the final product.

Grandia is still a highly entertaining game. It’s got a fun battle system, it has an interesting world to explore, and it doesn’t take itself too seriously. With RPGs branching out into new areas, it’s good to have traditional RPGs to play. You know what you’re getting, but you don’t mind, because it’s just fun to play.

In my mind, there’ll always be room for RPGs like Grandia. They’re not all that you want to play, but you like them to be there, because the formula works. That is, perhaps, my highest endorsement.