...as far as video game experiences go, .hack is undoubtedly unique and worth the time of any player looking to take on the challenge of this anti-formula RPG. 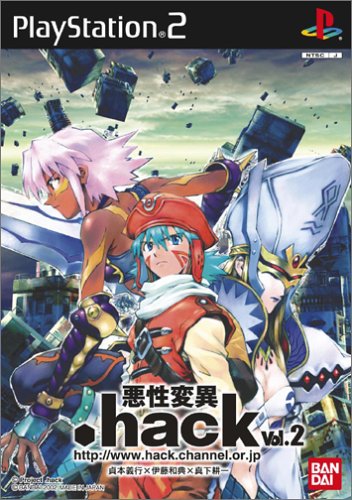 Note: This review is written with the assumption that the reader has played, or is familiar with the game’s predecessor and first installment into the .hack series, INFECTION. If either situation does not apply to you, it is recommended that you first read the review of part one in order to understand some of the concepts brought forth in this review.

As the corruption of The World steepened, so did the bizarre occurrences in the real world. Whole city blocks fluctuated with the loss of power. Cell phone networks were neutralized, satellites began to fail, and panic-stricken citizens flooded the streets in chaos. While on the outside these peculiar happenings remained unexplained, within The World, its system’s corruption was evident; not to mention obviously caused by the presence of the Skeith – Aura’s pursuer. Kite and company had hopped from dungeon to dungeon, server to server, trying to uncover the root of the ongoing phenomena, only to ultimately unearth deeper intricacies involving The World, the ALTIMIT OS, and the CC Corporation. Further instances similar to Orca’s began to surface, and additional areas within The World became barren and unpopulated due to severe instability.

.hack//MUTATION starts off just a step after INFECTION. Like its predecessor, the game is a balance between in-game play (that is, playing within the realms of The World), and navigating the desktop and message boards in order to unravel the mystery of Aura, Orca’s coma, and the corruption of The World’s system’s. The trouble with part two of the .hack series, however, is that while the story may pick up and move ahead, the game itself seems to lag behind in every aspect. It is, in fact, practically a mirror image of INFECTION, which was the official mold for the entire series. Sparse

Visually, the second installment of .hack remains virtually unchanged. Considering that the games have already been finalized and released in Japan, it goes without saying that the graphics will remain identical from game to game. While this consistency is not necessarily a bad thing, as it allows each new game to be released within a tolerable amount of time from the last, the graphics remain lackluster and plain. While they do successfully achieve the anime feel after which the game’s makers were aspiring, the graphics fall short in impressing players beyond an average level. In addition, the tile sets used for the first game’s dungeons have been brought back for MUTATION. This makes the game feel like one giant case of déjá vu instead of a new adventure. The only novel environments are the two new servers, Theta and Lambda, to which players gain access during the game’s progression. Despite these new locales, there is nothing outwardly special about either, as towns in each game offer little more than new shops with higher level weapons, new NPCs to trade with, and more powerful dungeons to enter. The story only gains focus when exploring required dungeons, which are not limited solely to the new servers.

This, in essence, is the only difference between one .hack and the next. The plot in MUTATION, carried over from INFECTION, at last manages to pick up and achieve some bearing. Following a recap of the events leading up to the game, .hack//MUTATION takes flight and begins anew the search for answers. Tie-ins are made between the game series and the anime series through flashback sequences that display the events that transpired in .hack//SIGN. More importantly, the last-minute explosion of plot from INFECTION has some light shed on it. Ultimately, however, players are subjected to yet another mind-shattering and frustrating twist towards the end of the game. If one did not know better, it could be theorized that the makers of .hack included these twists in order to force players to purchase the next installment just to ease the throbs of the former game’s cliffhanger.

Just as one can expect, the battle system has also managed to elude changes from INFECTION. The same basic method of hammering away at the X button while interrupting the flow of combat with either Kite or the party’s menu remains. The controls are still a bit awkward, and targeting can often cause players to grimace. With the exception of new weapons, armor, and items to be discovered as well as new moves to be gained, there marks no difference in terms of combat between one .hack and another. However, outside of battle, there have been a few additions to “spice up” gameplay for those looking to take a break from spelunking dungeons. In the newest servers, Grunty Racing has become an available minigame. Players partaking in this will compete in a race with the objective of collecting flags located throughout the server. It is mildly entertaining, but hardly a saving grace to a game as seriously toned as .hack. Lastly, there are a handful of new wallpapers, sound files, and other similar features to be collected for the ALTIMIT desktop.

This ongoing theme of non-change is also applied to the game’s sounds, as well. There are no noteworthy additions to the game’s soundtrack. Despite the anime series, .hack//SIGN, boasting one of the most beautiful musical scores to date, the game falls short and sports a rather uninspiring and lifeless score. Just as before, it is merely meant to accompany dungeon exploration and crucial scenes on the most basic of levels. Once again, there is an option to toggle between Japanese and English voice acting, and the same voice actors from the previous game appear once again. Although this additional consistency can be viewed as a pro, the poor voice acting is still an undeniable con. Like many PS2 RPGs, .hack suffers from this dilemma as well. As nice as it is to hear a character be given more life with speech, it becomes awkward during more emotional scenes when the voice fails to convey the necessary emotion. Thankfully, as with the last .hack, the voice acting can be interrupted by scrolling past the text once it is read at the player’s own pace.

All in all, anyone who braves this second installment of .hack will discover that it is nearly identical to the original in every aspect. Of course, the game can be commended for at least finally taking the plot in some direction. Role Playing Games aren’t about glamorous gameplay or unparalleled graphics, nor are they defined by their unmatched soundtracks; these facets are merely benefits to a game. When a story surpasses any other and is accompanied with characters capable of truly touching the player, those other factors can be tolerated. With .hack, the promise of its maker’s genius shining through does just this. Most facets of the game cannot claim perfection. In fact, very few can allege to be any fun. However, as far as video game experiences go, .hack is undoubtedly unique and worth the time of any player looking to take on the challenge of this anti-formula RPG.