I am Setsuna takes enough risks to be worth experiencing, in spite of its narrative foibles. 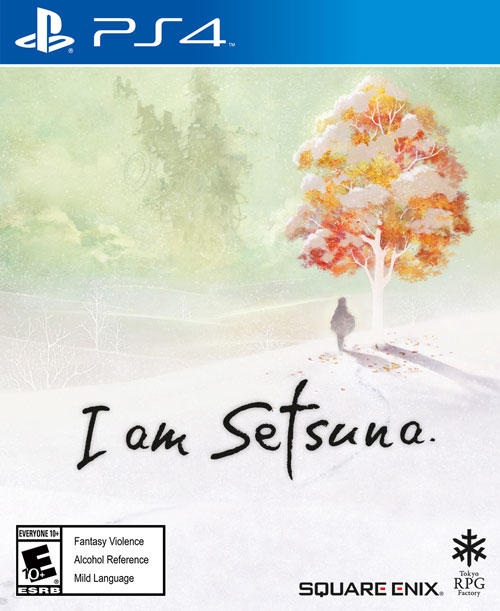 In a rime-kissed land of perpetual melancholy, a grim fate awaits a girl of steadfast selflessness. The tears of the people, like so many raindrops, fall hot on the snow-blanketed earth below.

There’s a certain artfulness behind the premise of I am Setsuna, an unabashed throwback to the RPGs of the 16-bit era. Constructed as a retro-style JRPG with modern trappings, it tells the story of a maiden on a sacrificial pilgrimage to save the world. It opts for a less protracted approach, following a linear path to narrative climax that lasts no longer than 15-20 hours. Its world is intimate and audiovisually consistent, while its gameplay systems toe the line of simplicity just enough to remain interesting. Silent character emotes stand in for voiced cutscenes, brisk conversations take the place of droning monologues, and conflict ends as quickly as it begins. By narrowing its scope, I am Setsuna succeeds in not overstaying its welcome, but its brisk pace also mitigates the emotional resonance of its story.

Ostensibly a tale of sadness, I am Setsuna addresses heavy themes: how far will determination take one who faces certain death? Is there value in living without purpose, without direction? Is all life equal? The titular heroine’s brief journey through a land of unending snow is surprisingly optimistic in the face of so much bitterness. I am Setsuna genuinely tries to impart a message to the player, and I believe in its authenticity. But the game has a critical failing, and it lies in the straightforwardness of its writing. Too often do characters speak in plain language that detracts from the gravity of its circumstances. Occasional glimmers of prosaic finesse shine through, but by and large, the game lacks a certain sense of poetry. To this end, it would have benefited from an even tighter focus. A greater attention to language could have elevated I am Setsuna to a modern masterpiece. Instead, it is a serviceable tale, with characters who rarely break the mold tackling themes beyond their depth.

Tired as the comparison may be, failing to mention I am Setsuna’s parallels with Chrono Trigger would indicate stubbornness at best, if not outright negligence. (It also transparently borrows the main narrative thrust of Final Fantasy X, but I digress.) Callbacks are abundant: the katana-wielding protagonist can perform an X-Strike with a girl whose attire bears the likeness of a frog. At one point, a character holds a shining weapon aloft, unlocking the entrance to long-sealed ruins. Another character learns a spell called “Luminaire.” The party discovers and subsequently names an anachronistic, high-tech airship. There’s even a scythe-wielding analogue to Magus, the villain of CT’s first act. I could continue pointing out references, but suffice it to say that I am Setsuna wears its inspiration on its sleeve. There’s enough to differentiate it from its progenitors, naturally, but the game is unabashedly the result of its developers looking back at past successes in the genre, for better or worse.

Chrono Trigger’s influence is apparent most of all in the game’s battle system. Turn-based and reliant upon an ATB gauge, I am Setsuna is identical to it in every way aside from its “Momentum” mechanic. By storing up to three charges of Momentum that accumulate when a character’s ATB gauge is full, the player can press a button with good timing to trigger additional effects on any action. These range from bonus damage and increased buff duration to making some offensive actions simultaneously heal the user. Momentum adds a welcome layer of interactivity that prevents battles from becoming too routine. Character growth is similarly streamlined; the party learns their abilities, both active and passive, by equipping “Spritnite” stones. Spritnite can be further customized by triggering “Fluxation” bonuses in battle that bolster the stones with additional effects, though this element is too random to reliably micromanage until late in the game.

From a stylistic standpoint, I am Setsuna is unflinchingly committed to its “snow and sacrifice” motif. Its visuals are simplistic yet graceful, and nearly every area has a chilly ambiance. Characters leave trails in the snow, trees rustle in the wind, and frigid waters reflect Setsuna’s determined countenance. The soundtrack is led entirely by piano, creating a solemn atmosphere that is unquestionably beautiful but has a tendency to blend together. I am torn between wishing there was more variety in the game’s audiovisual presentation and acknowledging the cohesiveness of its design.

I am Setsuna takes enough risks to be worth experiencing, in spite of its narrative foibles. It is imperfect, and yet saying it “falls flat” would be overly reductionist. I admit I’m disappointed that I wasn’t more touched by its themes, but there remains a gentle beauty within I am Setsuna that I wouldn’t mind revisiting. Perhaps I’ll make the pilgrimage once more a few winters hence.

Story isn't as emotionally gripping as it could be, fairly derivative in some respects.

A brief, somber, and quietly beautiful journey that occasionally stumbles to resonate emotionally.