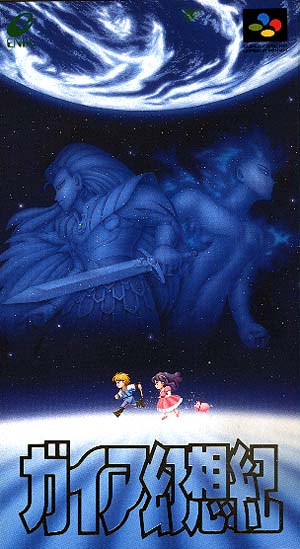 Enix has always reminded me of the Snapple Company. Although everyone likes it, (well, almost everyone) it has never been truly appreciated. Bigger beverages like the rival colas, Dr. Pepper, and even water have been served in restaurants, leaving this tasty fruit drink on the shelves. Enix has made many good games in its history, and I would like to brush the dust off of a few of them. Illusion of Gaia was built for Nintendo’s finest system, the SNES, and was almost completely ignored.

The story takes place in a world almost like our own. You play the role of Will, a telekinetic young peasant armed with his father’s flute and a sense of curiosity. As in many of Enix’s games, Will’s father Olman, a famous archeologist, is missing. He had been searching ruins around the world with his son and eventually set out to explore the Tower of Babel. However, he never returned. Will somehow escaped and got back home, but he had no memory of what had happened.

Will lives with his grandparents now in South Cape. His life has become boring for the moment, but one day, the king sends out a summons for the boy. Mysteries abound even further when Will learns that he has been chosen for a dangerous fate from a mysterious voice. He sets out with his friends in hope of discovering what awaits him and, perhaps, the fate of his father…

Although similar to Secret of Mana, Illusion of Gaia is definitely not a clone. Although you only control one character, he eventually gains the ability to morph into either a knight or a big, blue blob. Each form has its own set of special moves that are required to solve some of the many puzzles in this game. The game consists of towns and dungeons, without a real world map to explore. As in Final Fantasy Tactics, you simply decide which area to move to.

Experience is not used at all. Instead, enemies drop Dark gems, and if you collect 100 of these you get an extra life. To improve your life, offense, and defense, you need life, offense, or defense jewels, and these are hidden inside of every room with enemies in the game. By killing every enemy in the room, the hidden jewel will be given to you and the corresponding statistic will increase. Each room has only one jewel; don’t waste time trying to train.

The game has a decent challenge to it, not only because of the hard enemies but also because of the puzzles. You will be forced to find secret doors quite often, and opening them requires one of the first special moves that you learn. Other times, the game just wants you to do some creative block pulling/pushing. Although most are simple, you will sometimes spend hours exploring a dungeon just so you can find that one key you need or the switch that you missed. There are even a few mini games to play, and I honestly enjoyed the game for what it was. Gameplay gets an 86%.

This game was made near the end of the SNES’ reign of glory. Like Secret of Mana, all the characters are sprites, and all of the backgrounds are pretty standard. Everything is done with good quality, however, and there are many of those standard backgrounds, creative or not. I really liked the bosses, mostly because they used both of the two rules of boss making. They not only had the hulking type of boss who took up at least the entire screen, but some of them were barely larger than you. The enemies were almost all original with very little palette swapping and I’d have to give Graphics an 88%.

The music in Illusion of Gaia was also worthy of praise, but it could have been better. It used far more variety than many of the other games for the SNES, yet each of the songs lacked something. A few of them fit very nicely, but many seemed out of place. The songs are memorable and add to the background feeling well, so I suppose the music was good. The game has many moments where Will plays his flute, and I was hoping that you could control this. Instead, Enix decided to merely let you pick the song and let the game play it. Oh well. As for the sound effects, they were nice, but I don’t really have any comment on them. The audio was good, but not great. Sound/Music gets an 83%.

The story was definitely my least favorite part of IoG. Many of the characters have no background at all, but are still used as main points in the game. I truly hated the love story between Lilly and Lance. The main plot sends you searching through every civilization in world history for the Mystic Statues, even the sunken land of Mu. Your goals are vague at times, and I was surprised when someone would come up and thank me for something I didn’t know I did. The ending is basically a poorly explained message of how it’s mankind’s job to control evolution and make the world a better place. The story was jumbled and confusing, and many plot holes remain unanswered by the end. Rather than dwell on this very weak point, I’d like to give Storyline a 57% and move on.

Fortunately, the game was not made to be a story. It was made to be an action/puzzle game, and it did that nicely. Movement was smooth, special moves were comfortably pulled off, and even the mini games were easy to understand. Controls are not a stumbling block in this game and let you enjoy it to the utmost, so they get an 85%.

Illusion of Gaia is an Action/RPG that fails in the RPG section, but shines quite well in the Action. If you play the game, don’t get too swept up in the dialogue or story, because you can’t. Have fun beating things silly with a wooden flute, and after you beat it, try it again! A side quest has been added where you search the world for 50 red jewels to give a man named Jeweler Gem. I tried this without the cheat book four times, and I was still missing a few! The prize for finding them all is a somewhat difficult Bonus area and one of the hardest bosses I have ever fought in any game. Depending on what you want from this game will make it sink or swim, but I liked it and give it an 80% Overall.