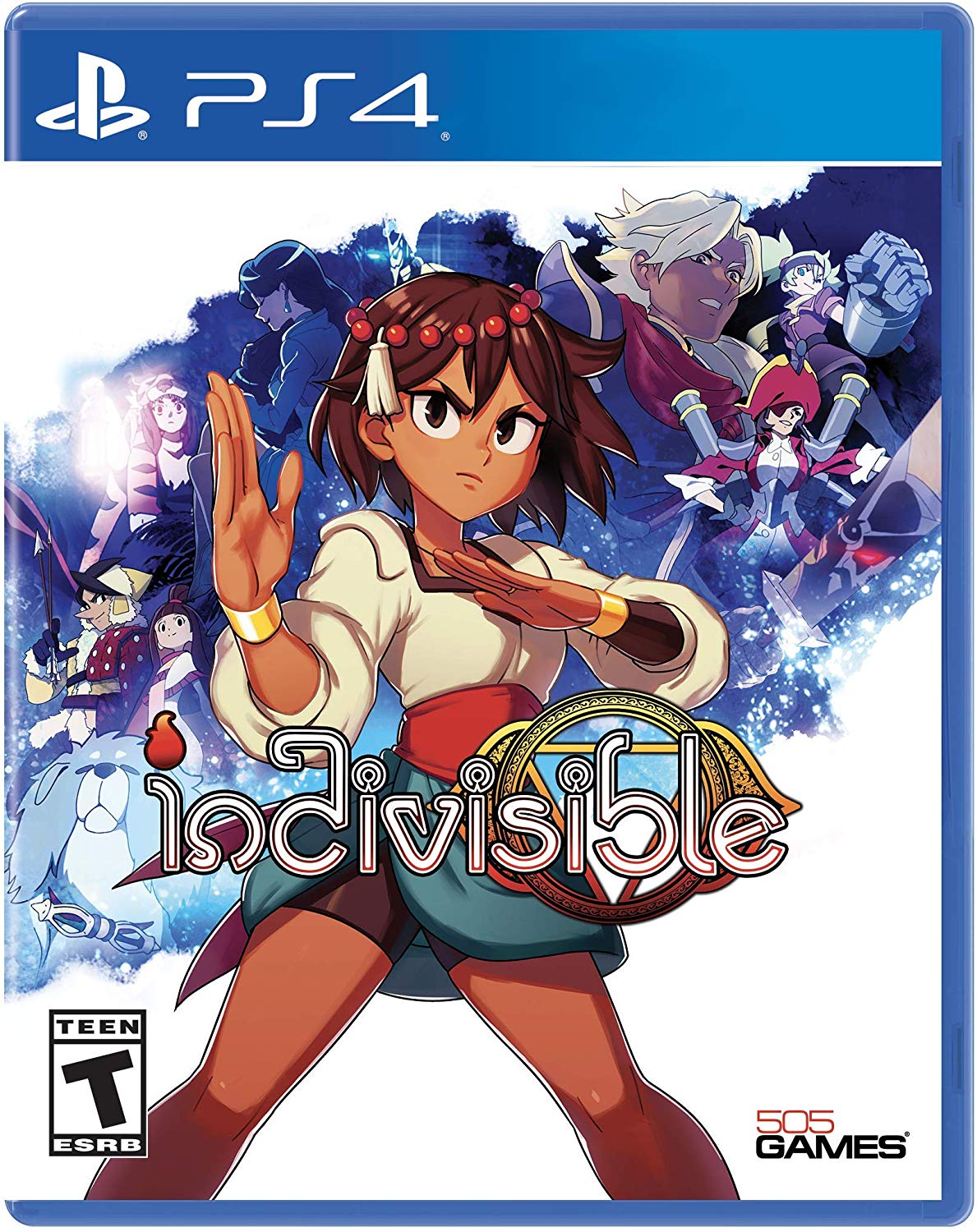 Yes, Indivisible is one of the most beautiful games I’ve ever played, but it’s also so much more than that.

Indivisible has garnered lots of attention since it entered development four years ago for its hand-drawn visuals and Valkyrie Profile-inspired combat, and deservedly so. Lab Zero Games have taken the PlayStation classic’s gameplay, fine-tuned it, and added their own flare to create something truly unique. It’s a passion project where you can see all of the love put into creating the game in every single detail. The end result is something that feels truly fun and rewarding.

The game revolves around Ajna, a 16-year-old girl who is on a quest to get revenge for the destruction of her village but discovers a dark and mysterious power inside her along the way. Her story is a fascinating look at spirituality, growth and finding inner peace, using a variety of cultures and mythologies from Southeast Asia to Latin America, among others, to explore these ideas and showcase these cultures to the rest of the world. Ajna’s personal growth is central, as she starts as a rash and sometimes selfish teenager and gradually becomes an enlightened and accepting person. This stops the story from feeling too generic, along with the twists and the wonderful characters you meet throughout.

Like Hollow Knight, Skullgirls, and a few others that came before it, Indivisible’s character models are all hand drawn. They look utterly stunning, and even better when in motion. All of your party members each have visual quirks and unique movements that encapsulate who they are as a character. It’s a joy to watch them in combat, whether they’re idle or attacking. On top of that, every single NPC has their own character model, and no two are the same.

Even the backdrops have this same amount of detail and vibrancy to them, each location feeling different to the last. There’s so much going on in the background of each area; I can only imagine the painstaking amount of effort the team has put into creating this unique world. Occasionally, parts of the previous section stay on screen for a few seconds when transitioning from cutscenes or areas, but these are infrequent and I was generally too in awe of the art style to really notice.

The characters are an important part of the game’s makeup, and there are over 20 playable ones at that! Not all of them impact the plot, but each of them are memorable for a different reason. Razmi, a woman who carries around her tiger Bom’s soul in her lantern, is deadpan, hilarious and steals almost every scene she’s in. There’s also Naga Rider, a hero of justice who protects Tai Krung City from criminals: yes, he’s absolutely based on the original Kamen Rider, and yes, he’s absolutely incredible. I could list many of them, but it’s best to see just how well all of them meld together. They also come from a variety of different backgrounds, so it’s wonderful to see so many different cultures represented by genuinely interesting and wholesome characters.

Indivisible does an excellent job of balancing all of its various gameplay elements. Each location has a Metroidvania-style map which fills up the more you explore. The early maps start off fairly linear, but around a third of the way through the game, everything opens up, allowing you to visit brand new locations and explore at your own pace. It’s here where everything started to click for me. Late in the game you unlock the ability to warp to each major location, but there’s only one warp point for each map, and these maps can be pretty big. The warp points tend to be positioned near the end, and the first time you can use them, access beyond the room is blocked for story reasons.

Once you get a bit more freedom, Ajna begins to learn new skills which open up the world of Loka even more. Indivisible manages to capture this exact feeling. Using these newfound skills takes a bit of practice, but the game eases you in and teaches you by giving you simple puzzles. There’s some fiendish platforming at certain points that requires you to utilise multiple skills one after the other. These sections can be very frustrating as there’s very little margin for error, but if you fail, you simply respawn at the beginning of the room, barely losing any progress. There’s one location in particular which the game forces you to return to multiple times, requiring you to retrace your steps and sometimes redo the same platforming puzzles over again, luckily with the occasional shortcut. Fortunately, there’s a more fun challenge in the form of the red stones that are tucked away in each map. These allow you to upgrade your party’s stats, and collecting them feels like a fair balance between testing out your skills and precision platforming.

Now we get into the game’s combat, which is Valkyrie Profile with a flavour of the fighting game genre. You can take up to four characters into battle with you, each mapped to a different face button. Pressing that button causes them to attack, and each character has a neutral, up or down attack, which are all useful for different situations, like breaking an enemy’s guard or juggling them in the air. When enemies attack, you can block them by pressing the corresponding character’s button, and if you time your block perfectly you recover a small amount of health. Building up combos is key, because this fills up your Iddhi meter which you use to unleash special attacks to heal your party or cause massive damage, depending on which characters you’re using.

A lot of Indivisible’s combat comes from picking characters that you feel comfortable using. Your party’s stats are based on Ajna’s level, so the stronger she is, the stronger they will be. And there’s no equipment to worry about, as your party shares a defense stat. You can upgrade your defense (which improves the window of opportunity you have to guard) or the number of attacks your character can use by exchanging those red stones you collect. If I ever got stuck, grinding was never the answer; success was tied to skill and ability, being able to block at the right time and use the right attack at the right time, just like a fighting game. It’s an extremely rewarding and deep system that’s simple on the surface but difficult to master.

I’d be doing a disservice if I forgot to mention Hiroki Kikuta’s wonderful work. Seeing that he would be composing the game’s music was one of the biggest hooks for me, and his work compliments Indivisible beautifully. His experience working with less conventional instruments does this game wonders. Take Tai Krung’s theme, which has a mix of steel drums and string instruments which create a futuristic urban feel that hides an underbelly of crime. And each location has its own battle theme too, which expertly reflects each culture and location you visit in the game. The sound mixing is sadly inconsistent though, with the wonderful voice acting in cutscenes being much quieter than anything else in the game.

Yes, Indivisible is one of the most beautiful games I’ve ever played, but it’s also so much more than that. Lab Zero Games have managed to make something truly unique with the game’s world and characters, and the mixture of exploration and fun combat made playing it joyous, even if returning to certain areas and the frustrating platforming can dampen the experience a bit. The further I got, the more I fell in love with the game, and with more character sidequests to complete and stones to collect, I’ll be back for more in no time.

Takes a while to really get going, some frustrating and repetitive platforming, extremely quiet voices in cutscenes, a couple of visual glitches.

Indivisible takes three different genres and melds them together expertly to create something wholly unique.