I can't recommend it to newcomers in any way, but for those who have followed [Kingdom Hearts] this far, they'll find a flawed game that occasionally reaches some great highs. 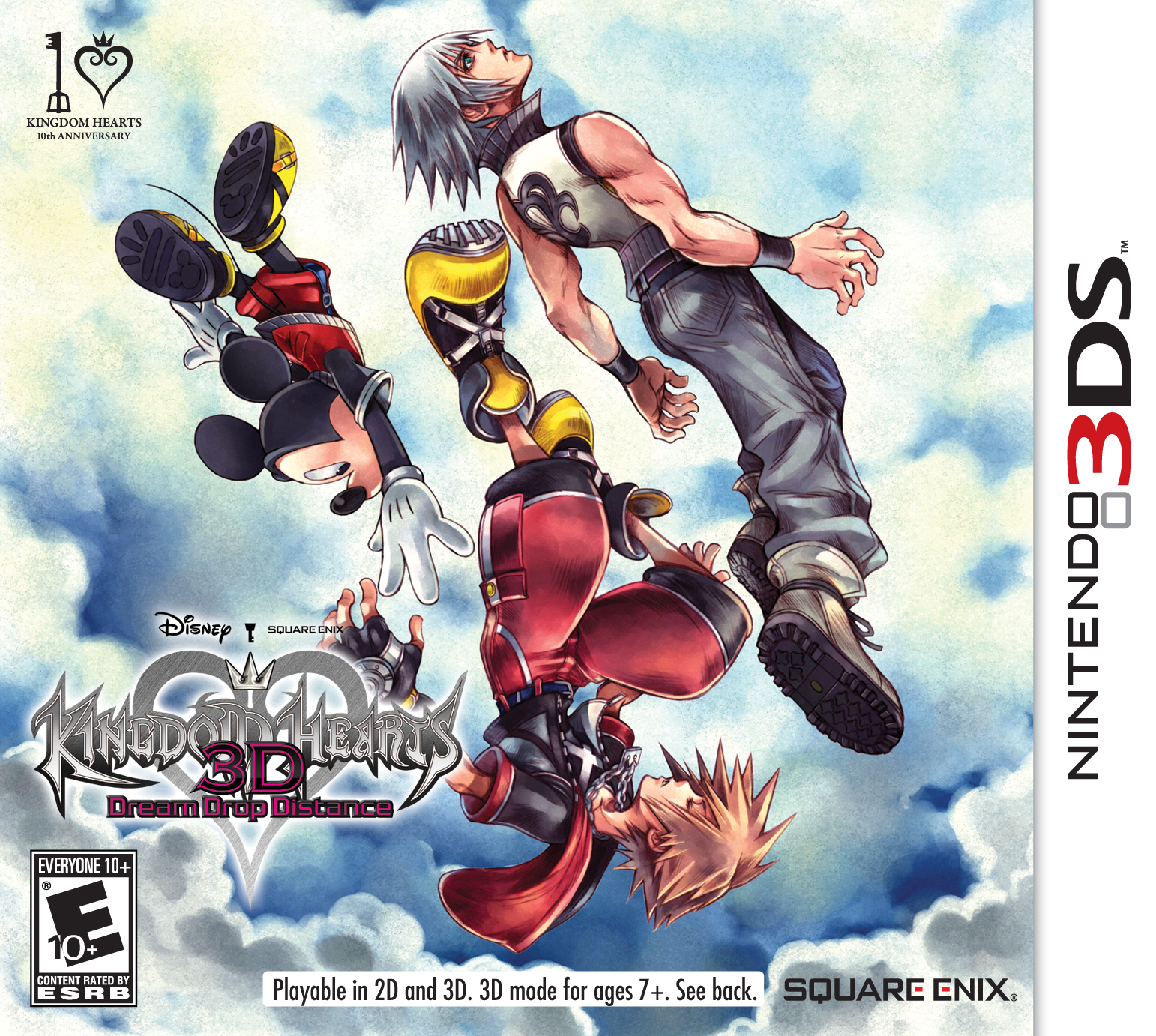 Note: Given how we’re currently seven games deep in this series, this review may contain plot spoilers for all previous entries.

As a long-time follower of the Kingdom Hearts games, I wanted to love the series’ latest ridiculously titled entry. As I worked my way through the story, I went through various ups and downs, indeed loving certain aspects– but hating others. Fortunately for me, the good parts outnumbered the bad. However, when the credits finally rolled after a lengthy gauntlet of final battles and cutscenes bearing only the slightest hint of Disney, I couldn’t help but think about how far the series has come from what it once was.

Dream Dream Distance brings us the story of Sora and Riku’s Mark of Mastery examination, a test to determine whether or not they are worthy to become true, official keyblade masters. What follows during the course of their trial is a journey into dreams, full of twists, turns, and revelations that will challenge what fans thought they knew up to this point. In other words, it’s full of convolutions and retcons, just like every previous spin-off title.

And from that stems my biggest problem with this game, and now the series as a whole. At this point, Kingdom Hearts is now completely inaccessible to newcomers. In-game primers on every previous game, a glossary of terms, and some neat story flashback moments help to alleviate some of the plot confusion, but despite the fact that I’ve played every previous game in the series, it was still difficult for me to follow the story. Compounding this problem is the fact that nearly nothing happens throughout the entirety of the game, with the majority of the story being compressed into the final moments of the final world. This isn’t new for the series, but the problem is exacerbated to a ridiculous degree here. What this means is that if you aren’t already well-versed in Kingdom Hearts lore, you’re going to have a difficult time dream dropping into it now.

The flow of gameplay should be mostly familiar to anyone who has played the past few games. Sora and Riku have access to a basic attack combo, a variety of defensive moves, and a deck of customizable commands from which to draw special attacks, magic, and healing. The new Flowmotion system gives both characters access to some over-the-top acrobatics, including wall jumps, pole spins, and speedy attacks. By dashing or rolling into a wall, you can enable Flowmotion, and from there you are free to bounce and careen off everything in the room, large enemies included. When it works, Flowmotion is a lot of fun and makes traversing the game’s massive environments a total blast. Bouncing from wall to wall in a narrow corridor never gets old, and it’s a pretty slick way to lead into the heat of battle.

The game’s other big new feature is the Dream Eater system, which is essentially a light monster-raising minigame. Rather than the customary Disney partners from the main games in the series, Sora and Riku can use materials to create various super-cute Dream Eaters that will fight at their side. Much like the Limit attacks in Kingdom Hearts II, each Dream Eater has a special Link attack with Sora, and some of these are quite powerful. In Riku’s case, Linking with Dream Eaters activates special combat styles akin to KHII’s Drive forms or Birth by Sleep’s Command Styles. Additionally, each Dream Eater comes loaded with abilities to teach the heroes, which creates a nice impetus to find more and more of them.

Dream Eaters are enjoyable, but it’s hard not to notice the gaping hole left by the absence of party members with actual personality. It’s always strange when a character says “we’ll go together!” and then disappears from the game when the cutscene ends. Not having Donald and Goofy’s yammering as you soldier onward makes the game a rather lonely affair. Additionally, the system of finding and fusing commands from Birth by Sleep was much more compelling and felt less roundabout.

Boss battles are big and dramatic, and usually a lot of fun– although they can be frustrating, because the majority of the bosses’ strategies are to run away from you constantly. A meter called the Drop gauge measures how much time you have before you are forced to switch to the other character, and battles reset entirely when you return to the previous character. Because of this, it seems as though bosses were specifically designed to run your meter down, which is an exercise in irritation.

There is considerable meat to the gameplay, for sure, but mechanically the game leaves a lot to be desired. Swapping commands on the 3DS’ awkwardly positioned D-pad is very difficult to do while moving, and that can be deadly during a boss battle. The lock-on system is functionally the same as previous games’, but here it just can’t seem to do the job. There’s frequently so much going on and so many enemies around that you’ll struggle to lock onto the correct enemy, and you’ll end up flying off in random directions or accidentally Flowmotioning off of a wall or large enemy.

Speaking of which, Flowmotion is great for movement, but the series’ notably wild camera (which I’ve had no problem with in previous games) spins out of control here. Oftentimes the camera will spin and reset several times during combat in smaller areas, leaving you totally perplexed as to what’s going on. Additionally, the camera is pulled too close to your character and angled just far enough down that it’s difficult to ever get a good look at your surroundings.

The pacing of the game leaves something to be desired. The combat is a lot of fun, but that’s all there is. Every single world is a simple formula of running through massive areas to the next cutscene, fighting tons of enemies along the way. The final world in particular is a long, difficult slog through powerful enemies, with barely a single cutscene before the final battle. It’s legitimately disappointing and takes away from the feeling of discovery that graced earlier entries. Areas are huge, but mostly empty, and this works largely to the game’s detriment. Spending twenty-plus minutes in an area only to die from a cheap shot you couldn’t see coming because of the infuriatingly uncooperative camera is maddening– especially when you consider that everything you’ve done since entering the area, including making changes in the menu, is lost upon death.

Visually, the game is just about on par with the PS2 entries in the series. You’ll notice details like the spots inside Monstro no longer being animated, but for the most part everything looks good. Unfortunately, the game has moderate to severe framerate issues, and there were many occasions where, in conjuction with the out-of-control camera, the game became a garbled mess. I would have gladly sacrificed some visual fidelity for a steadier framerate, particularly in higher difficulties where every moment counts during combat. In most cases, the 3D effects are throwaway, as they are in nearly every other 3DS title. The framerate also suffers additional dips in 3D mode, so I found myself turning it on only occasionally during cutscenes or during the titular dream drop sequences in which you careen towards a new world.

The game’s strongest aspect is undoubtedly its audio. Series vet Yoko Shimomura returns with yet another strong showing, and Square Enix standbys Takeharu Ishimoto and Tsuyoshi Sekito bring their A-game as well. Mostly new music makes up the soundtrack, and it is among the best the series has seen. Even though the Disney worlds play like an afterthought, their music is fantastic and constantly gets you amped up to run around fighting. The final battle tracks (of which there are several) are dramatic and appropriate for the onscreen melodrama they accompany. For further details on the music, check out our review!

Voice acting ranges from moderately bad to exceptional; fortunately, most of it falls in the latter category. Haley Joel Osment is starting to sound a little odd as Sora, but fans will undoubtedly appreciate the number of actors reprising their past roles. The writing varies pretty wildly too, though the only egregious offender is again Sora, with much of his dialogue seeming forced and infantile to an absurd degree. The plot itself is complex, but with stronger writing and better pacing, it could have been much easier to comprehend.

Scoring this game was incredibly difficult, because this is a series I truly love. Dream Drop Distance shows that the incessant (and arguably unnecessary) convolutions to the story are not slowing down any time soon. The Disney elements are increasingly marginalized, and it’s a testament to how sorely missed they are that some of the best moments in the game are when Donald and Goofy show up, even with their minor parts to play. Some of the worlds are well-designed and great to look at (Tron Legacy!), but plot-wise have never been more irrelevant. There are so many confusing revelations packed into the final few hours of the game that one has to wonder why the writers didn’t see fit to space them out over the course of the entire game in order to make them more digestible.

Kingdom Hearts: Dream Drop Distance is everything gamers have come to expect from this series, for better or worse. I can’t recommend it to newcomers in any way, but for those who have followed it this far, they’ll find a flawed game that occasionally reaches some great highs.

Moderate to severe slowdown in many sections, most Disney worlds are empty and uninspired, plot is convoluted and not at all accessible

Not as good as Birth by Sleep, but it should keep fans happy until Kingdom Hearts III.