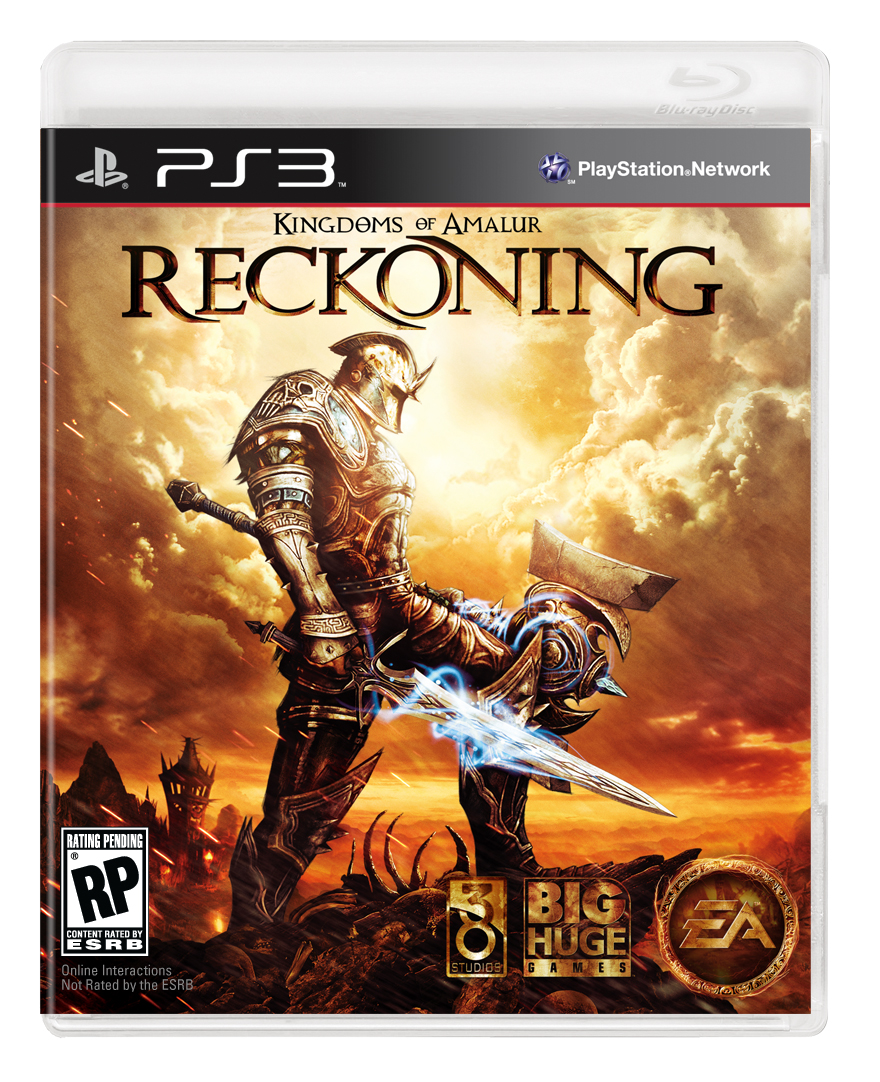 When I first played Kingdoms of Amalur: Reckoning, I had two primary concerns – lack of identity and repetition. The opportunities of an open world RPG were there, as was an entertaining and flamboyant battle system, but these are only as good as the foundation beneath. Despite invoking some big names in fantasy, the developers created a totally functional RPG, but one everyone has played dozens of times before.

Reckoning plays like a single-player MMORPG with an incongruously action-packed battle system. The player rides a tide of disorganized quests, battles, and treasure chests from one semi-linear area to the next, progressing through a skeletal main narrative with mounting aspirations of becoming omnipotent. Story, setting, level design, crafting, and even combat are means to an end, a conclusion of amassed wealth and power that I’ve always found hollow when done for the sake of itself. For better or for worse, Reckoning provides a mechanical, gamey experience for enthusiasts of the MMORPG and hack ‘n’ slash genres, and not a particularly memorable one.

In the land of Amalur, determinism is the only philosophy. That is, until the rebirth of the protagonist, resurrected by an inexplicable gnomish device known as the Well of Souls. Mystery shrouds the details of the hero’s death, but everyone seems aware of his unusual rebirth, including the villainous Tuatha. Uniquely unbound by fate, the hero has the ability to change the world’s dismal destiny, but the Tuatha desire nothing more than to stop him.

Despite this perversion of the classic destiny-driven hero, the narrative exists solely because RPGs are expected to have one. When the story isn’t lost in a sea of side quests and tangents, a few important characters come and go, telling the hero what to do, which eventually culminates in a large-scale battle (after requisite fetch quests). The plot becomes slightly more exciting after this halfway point, but it’s so devoid of drama that most players will likely forgo the main quest in favor of character building. Curiously, player choice plays an infinitesimal role in the story, odd considering that the hero is the only character capable of choice.

The same meandering incoherence that infects the story seeps into lore, setting, and characters as well. Reckoning lacks the immersive properties of better RPGs, and Amalur has no presence as a fantasy world. There’s no sense of deep time implied by the oft-quoted 10,000 year history. Lorestones dotting the landscape spout murky fragments of ancient legends and divine rhymes while townsfolk sound off on dozens of bland worldly topics. Amalur might have history, but a world requires culture, science, religion, and ecology to be worth spending time with. I yearn for worlds to explore, but I stopped caring about Amalur less than ten hours in, a dire omen for a new IP.

Certainly, Reckoning’s cast of characters makes Amalur feel all the more like a prettily painted machine designed to churn out endless quests and rewards, like mass produced goods with slight, random variations. Shortly after watching the credits roll, I could barely put together a single character’s name. NPCs are vending machines proffering fetch quests, like overpriced candy bars that satisfy initially, but leave one starving later. Characters feel emotionally absent and lifeless, despite competent voice acting. Finally, the above average script never quite transcends the blandness so common in the genre.

Reckoning is adept at spewing forth content, however, and its target audience will undoubtedly spend many hours exploring Amalur. Although split into only five major biomes, the world takes many hours to explore thoroughly because each area is dense with secrets. The overworld is competently designed and encourages wandering, but dungeons feel randomly generated, despite being handcrafted. Hidden treasure, optional dungeons, wandering NPCs, and dozens of side quests ensure a steady flow of content from hour one to hour one-hundred. As long as the player isn’t picky about his reasons for adventuring, he should be happy.

Reckoning comes from a long line of RPGs in which the Quest has been reduced to the much inferior quest. Quests were originally grandiose journeys to the ends of a world, but RPGs seem bent on turning them into mere errands. But does calling a trip to the supermarket a “quest” make it any more exciting? Reckoning proves that an errand called by any other name is just as wearisome.

In exchange for temporary employment, the player receives experience, gold, and occasionally an item. In Amalur, treasure is as common as rocks. Quite literally: rock piles often contain a hidden cache of enchanted items. Managing hundreds of pieces of equipment – most of which are junk to be sold for gold that will pile up around you, never to be used – becomes tedious very early. Awkward menu navigation makes selecting items for the midden heap more time consuming than need be. Regardless, loot addicts will find a new realm of addiction with Reckoning.

Because Reckoning aspires to be an open world RPG, the player can engage in a few miscellaneous diversions when questing becomes tiresome. The crafting found in a hundred other RPGs proves typically useless and perfunctory here, and the crime system feels thrown in for the sake of including yet another genre mainstay. Reckoning is a conglomerate of mechanics stripped and stolen from a dozen other games, and even the art direction doesn’t feel like its own.

Perhaps a popular comparison, Reckoning’s resemblance to World of Warcraft is nevertheless an uncanny one. Of course, the artists painted Amalur a few shades darker than Azeroth, and graphical fidelity is quite high. The engine isn’t overly powerful – I experienced frame-rate drops, odd pop-in, missing NPCs, and misplaced camera shots – but there are some pretty sights among the great trees of Dalentarth and the ebony rocks of Alabastra. Like everything else here, however, the graphics lack personality, despite expressive monsters and a broad color palette.

The music strives to improve upon the traditional fantasy soundtrack but never quite succeeds. I remember enjoying a few tracks, but I also remember a general lack of music and hearing the same opening bars repeatedly while wandering the overworld. The lighter heart of the soundtrack complements the graphics nicely, however. The aforementioned voice acting makes the world feel more dynamic, and most lines are read carefully, even if no one actor stands out. The cheesy villain has perhaps a too recognizable voice – one best reserved for unimportant NPCs – but this is a minor exception.

If these are the elements borrowed and despoiled from other games, what does that leave? Not much: Reckoning’s combat feels like its only claim to originality. Reckoning features an action heavy, dynamic combat system more akin to God of War’s than any RPG’s. It’s a fast, sloppy, button-mashy system opposed to the typically more technical and contemplative combat of most RPGs; Reckoning isn’t fond of the adage “think before you act.” This is a colorful, bombastic system characterized by the rapid firing of flashy spells, devastating area attacks, and the hasty departure of a half dozen enemies. Despite the appearance of relying entirely upon skill, the combat rests on a solid foundation of numbers, provided by equipment, character level, and temporary aids.

Combat functions well and dispatching bands of enemies comprised the vast majority of my amusement with Reckoning. I felt sufficiently powerful at each stage of the game and enjoyed chaining melee attacks to ranged ones to various magic spells, creating a dizzying display of effects on screen. Losing my character in the chaos of battle isn’t always a bad thing. For most of the game, player skill seems more important than statistics, which I appreciate in a game of this variety.

Unfortunately, the battle system has little vitality. The first few hours had me excited to continue building my character and honing my skills for a long period of slaughter. In less than ten hours, however, I felt the ugly itch of boredom settling in. After obtaining a few abilities, combat doesn’t change in any large way. Since my enemies never changed, my tactics never changed. Repetition kills a good combat system.

As if repetition weren’t enough, after the initial excitement wears off, the sloppiness of combat shows itself. The automatic targeting system causes countless spell misfires, for example. The normal difficulty setting is too easy as well. The latter portions of the game saw me mashing a single button, and it was a physical attack, despite my complete investment in sorcery. Sluggish dashing and blocking allow enemies to catch you in a barrage of unavoidable attacks that can end a game cheaply. And enemies just aren’t very fun to fight because they all take hits and die the same. I never felt completely connected with the action on screen.

Character progression may be Reckoning’s strongest aspect, despite a minor caveat discussed below. Any hero can pursue any ability due to the game’s classless system; a choice during character creation doesn’t narrow the possibilities. Although Reckoning can’t let go of the conventional warrior/mage/rogue model, characters can easily multi-class into more compelling combinations. Each of the three skill trees contains fantastic abilities as well, making any character enjoyable to play. Warriors no longer have to mindlessly beat away at their foes while watching their mage friends have all the fun. Anyone can turn the battlefield into a canvas of elemental fireworks and blood. Looking forward to obtaining new and more powerful abilities propelled me onward more than anything else in the game.

Despite the freedom this system affords, I still felt encouraged to focus on a single skill tree. By tying certain weapons to each tree and making certain playable races more adept at spellcasting or melee, Reckoning discourages character diversity. Perhaps hybrids offer more powerful results, but I never found much reason to stray from a full-blooded sorcerer. Fortunately, this is a small complaint, made lesser by the option to reassign skill points with the help of certain NPCs.

For those bred on Diablo, World of Warcraft, and similar RPGs, Kingdoms of Amalur: Reckoning will no doubt offer a lengthy and satisfying experience. For me, the bare quest-kill-loot formula is boring enough done once, not to mention a hundred times. The developers seemed content with creating the framework of a game without adding the personality, humor, and imagination necessary for an engaging experience. This lack of character combines with repetition and unoriginality to make Reckoning just another anonymous fantasy RPG, and a boring one at that.