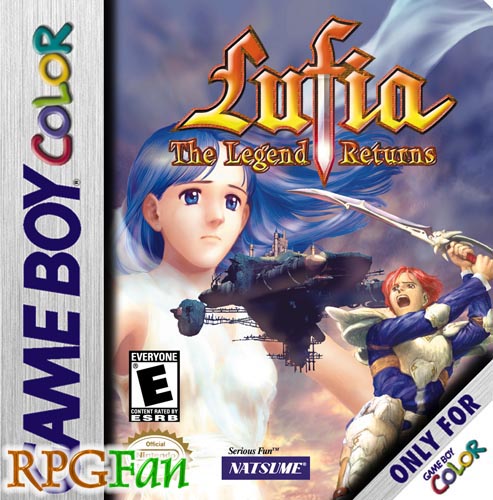 Through two releases on the SNES, Never-Land Company’s Lufia series never achieved blockbuster sales, nor did it even become a household RPG name. However, the games did enjoy near-universal respect from those who played them, thanks to their engaging storylines and involving gameplay. As a result, news of the impending release of a third Lufia game, this time for the Game Boy Color portable console, was received with great anticipation in the RPG-playing community. Unfortunately, the series’ first hand-held installment fails to warrant its pre-release attention; in spite of its strong visuals, a complex and creative game system, and a solid soundtrack, Lufia: The Legend Returns is mired in mediocrity by its shallow storyline and dull, repetitive play.

The Legend Returns takes place 200 years after the events of the first Lufia game and, therefore, 100 years after the series’ second episode. Although one might think that tales of a near-apocalypse, let alone two in a century’s span, would be passed down from generation to generation, it’s fairly obvious that history is not the favorite topic of study for the denizens of Lufia’s world, as all of the events of the previous games in the series have been completely forgotten.

Wain, one of the blissfully ignorant and the protagonist of The Legend Returns, is a young swordsman who resides in his isolated coastal home town of Patos. As the only able-bodied trained fighter in the small village, Wain’s job is to protect Patos from attacking monsters. The simple-minded Wain enjoys his peaceful existence as a guardian until, one day, a mysterious woman comes ashore and, after a brief conversation asking him if he can fight, begins to attack him.

Wain is startled by the attacks, but he manages to avoid them until the woman, who introduces herself as Seena, desists and tells him that she was only seeing if he was a worthy warrior. Nettled by the unnecessary test, Wain ignores her and goes about his village socializing with his neighbors. Shortly after, however, a lightning bolt shoots out of the sky and sets ablaze the house of Lamika, a little girl who lives next door to Wain, and her mother.

Although Lamika’s mother is able to escape the burning wreckage, the little girl is trapped inside, and only through Wain’s valiant efforts is she saved. After some recuperation with the aid of Seena, Wain discovers from some of the townsfolk that the lightning bolt appeared to come from the Tower of Death, an ominous structure nearby. Angered by the attack on his innocent young friend, Wain vows to scale the tower and exact revenge on any and all responsible parties. Seena, still impressed by Wain’s selfless act of heroism, vows to come along and assist him. From there, the adventuring pair’s quest begins, and as they travel, Wain and Seena discover that the Tower of Death is only the tip of the iceberg in their adventure.

As one can see, The Legend Returns doesn’t get off to a particularly original or well-written start, and although it does get better, the storyline never separates itself from the many other middle-of-the-pack plots that have been featured in previously released RPGs. The game does do a good job of letting the player know where to go and what to do next, so random wandering is mostly avoided, but the bulk of the event-based portions of the story lack excitement and are dully predictable. There is a good amount of character interaction, and some of it actually rings with commendable emotional poignancy, but the majority of it is sophomoric and reminiscent of elementary school conversation. The characters themselves are generally stereotypical of their personality types and don’t receive much development.

Natsume’s translation, while not poor, does leave quite a bit to be desired. The dialogue flows reasonably well, but all of it is exceedingly simplistic and lacks depth. Major grammatical errors are mostly avoided, but spelling errors abound. Natsume does promise that in the final version of the game, all of the typos are corrected from the beta reviewed here, though.

The Legend Returns’ gameplay is very noteworthy, because it’s both the best thing and the worst thing about the game. The foundation of the traditional RPG’s mechanics is mostly tried and true. The battles are turn-based, and like in many recent RPGs, players can see and avoid enemies in the dungeons. Interestingly, enemies don’t move freely in the dungeons; like in Konami’s Azure Dreams, they can only make one move for each one that you make.

On the plus side, The Legend Returns features unparalleled complexity of play for its genre on a hand-held console. The traditional RPG utilizes a plethora of level-building subtleties that will keep menu-management fanatics happy but shouldn’t turn off those who like their RPGs more simple. In combat, characters can use magic as well as limit break-style attacks (dubbed “Infuriating Points Skills” in Lufia) in addition to their standard weapon attacks. Magic is learned in shops at the cost of Learning Points (separate from experience points but also earned in battle). IP skills are learned through the use of scrolls found in dungeons; the only other limitation to their acquisition is a character’s spiritual force, which is also increased with Learning Points.

In terms of execution, The Legend Returns also fares quite well. Commands are carried out smoothly in combat, and the game moves at a brisk enough pace to keep it as interesting as it can be within the framework of its layout. The difficulty balance is strong; the RPG should challenge players without forcing them to build levels excessively.

The intricacy of The Legend Returns keeps the game’s play deeper than any others of its genre on a hand-held system, but it sometimes becomes excessive. A good example of this complexity surplus is the character placement matrix, a 3×3 grid in which the player positions the playable characters. Whether a character can learn an IP skill or not depends not only on his or her own spiritual force, but on the spiritual force of the other characters in the same row or column on the character placement matrix as the character in question. Because characters can be shuffled around in the matrix solely for the purpose of learning IP skills and then returned to their original positions, the matrix turns out to be nothing but gratuitous menu management.

The matrix also carries other irritating issues into the game’s play. Only the first character in each column of the matrix can actively participate in battles, but all player characters are susceptible to attack, regardless of position. This is quite annoying, because it forces players to tend to non-participating characters in combat, cheaply raising difficulty and wasting time.

The Legend Returns’ worst flaw, however, is the dull, randomly generated dungeons that players will spend the bulk of their play time in. The first 2 Lufia games’ most notable reputed strengths included well thought-out dungeons and entertaining puzzles, and it’s a shame that the Game Boy Color’s installment of the series completely neglected them. The Legend Returns’ random dungeons are limited in their design, boring to traverse through, and ultimately cause the game to become a tedious experience.

Fortunately, The Legend Returns’ control doesn’t further cripple its gameplay. Wain, your onscreen character, can only move in 4 directions, but he’s responsive to the control pad, and a dash button enables him to travel at a brisk pace, particularly through the narrow, uneventful passages that connect larger rooms in the random dungeons. Like the gameplay, the menus are complex and confusing at first, but navigation through them is amply efficient once the mechanics of the game are sufficiently understood.

Visually, The Legend Returns won’t impress anyone who’s played a game on a non-hand-held system any time recently, but it does rank with Dragon Warrior III as having some of the finest graphics that the GBC has seen. The 2D maps are about as colorful and detailed as I’ve seen on the GBC, and the sprite-based playable characters, while difficult to distinguish due to overuse of the color blue in them, hold their own. In battles, setting backgrounds are omitted, but monsters are drawn reasonably well. Like in most 8-bit games, the animation is a bit choppy, though that of The Legend Returns is better than most on the GBC.

The Legend Returns’ sound also is diminished, due to the weak aural system of the hardware that it is played on. Sound effects are feeble, consisting of the beeps and bloops that pervaded games of the 8-bit age (and, with more success, the music of bands like Stereolab and the Dismemberment Plan), and there is no voice acting in the game. The soundtrack, while not exactly noteworthy compositionally or stylistically, is quite pleasant to listen to as you traverse the many towns and dungeons in the game, though. The individual tracks repeat themselves too often, but they manage not to grate on the nerves in spite of their overuse.

Although Lufia: The Legend Returns will likely disappoint fans of the first two games in the series, it’s a solid release for the Game Boy Color in a genre that carries few titles on that console. If it’s not held to the standards set by its predecessors and today’s finer RPGs, The Legend Returns proves to be a worthwhile experience that RPG fans may want to check out.