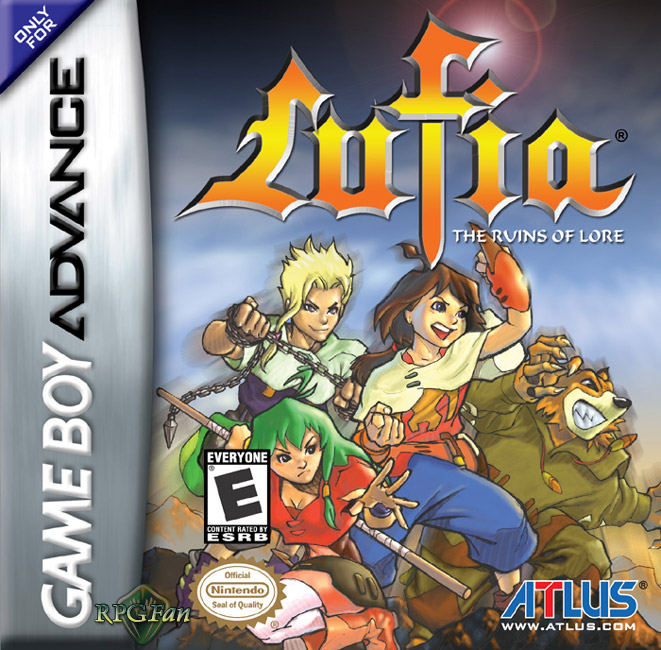 Lufia: The Ruins of Lore (LROL) is the game I love to hate. Ever since I first played Lufia 2 for the SNES, I had always craved a sequel that would live up to the incredibly high expectations that game created. After a complete sham of a game was released on the Game Boy Color (Lufia: The Legend Returns), which I found to be a complete waste of time, I was incredibly excited to hear of a new Lufia coming straight to the GBA. It looked amazing in the previews, and I was stoked to pick it up the second it came out. I knew something was wrong as soon as I looked at the ridiculously bad cover art for the box; something about it screamed poor quality, but I decided to pick it up anyway, hoping beyond belief that it would live up to my admittedly high expectations. Sadly, it did not; in fact, it registered so far below my expectations that The Legend Returns wasn’t even sounding so bad anymore.

The concept for LROL is simple enough that you have to wonder how the developers managed to get it all wrong. Combine the fun characters that dominate the Lufia universe, add in some small connections to past games, mix with monster collecting (a la Pokémon), and finally toss in the cool “tools” system which should allow for some awesome puzzles. Sadly, almost every single aspect of the game manages to fall completely flat on its face.

First off, the seemingly hard-to-ruin monster collecting aspect of the game has some pretty major flaws. You run into random critters, and when they have been weakened enough, you can attempt to capture them. Capturing monsters isn’t too tricky, and soon you will have your own little assortment of beasties. Sadly, none of them are really very useful. Unless you read through a walkthrough, you are not going to be able to create a very useable monster. Creating an excellent critter to fight by your side involves a boggling amount of exact creature capturing and special move switching (you can “merge” a monster’s ability with another at the expense of that creature’s life). The most powerful critter I managed to create (a Gold Dragon, which admittedly looked pretty cool) couldn’t even compare to the weakest human member of my party. Most creatures I captured, even when evolved to full capacity, hit at an incredibly weak rate for the entirety of the game. It is pretty sad to note that the only useful function I found for the captured monsters was as cannon fodder; they did a good job of getting the tar pounded out of them.

One of the cool things about Lufia 2 was that you could use special weapons and such to solve puzzles in many unique and fun ways. LROL follows this same tradition but instead opts to almost completely get rid of the puzzles. Sadly, the puzzles that actually do exist are either incredibly mindless and frequently insult your intelligence, or are complete exercises in trial and error. Rather than using your mind to solve a devious puzzle, you are reduced to failing over and over in order to figure out just what it is you are supposed to be doing.

Even straightforward, basic RPG action is terrible in LROL. The game sports a very basic overworld approach, in which all enemies are visible at all times and, theoretically, avoidable. In reality it isn’t so cut and dry. Whenever you move, the monsters on the map move as well, except they seem to know where you are going. Have you ever played hide and go seek with someone who knows exactly where all the hiding spots are? You will with LROL; the enemies cheat all over the place. Combine this with the fact that some enemies can move 2 spaces for every 1 you take, and that they re-spawn when you leave the area and return, and you have an exercise in frustration.

Perhaps the most annoying aspect I found in LROL is the fact that the whole game feels as though it was programmed by an amateur. I don’t know if the GBA simply doesn’t pack enough power to move 4 or 5 sprites on-screen at once, but there is an incredibly huge slowdown issue in this game (yes, slowdown in an RPG – the mind baffles). If you even attempt to move quickly, the game stumbles to a crawl. Even the control is terrible (partially due to the slowdown). There will be plenty of times when you actually miss a turn in the dungeon because the game is chop, chop, chopping along as you make your way down the garbled corridor. I find it an insult to gamers that Atlus believed they could release such an obviously buggy game (and there ARE other bugs, go ahead and visit a LROL-specific forum and you will see what I mean).

I know that Lufia games aren’t exactly renowned for their deep, engrossing storylines (they generally amount to, “big bad Sinistral comes down to wreak havoc.”) However, the storyline in this game falls flatter than even the worst RPG’s. Evil Empire out to rule the world? Check. Cliché characters and even more cliché character interaction? Check. Recycled environments that annoy you even more the second, and sometimes third time you have to go all the way through them again? Check, and double check. Overall, the plot will not engross you, you will wish the dialogue would go away, and you will have no reason to continue on with the game.

Every once in a while a game will come along that looks so amazingly good that you are willing to forgive a few of its failing points. LROL is not that game. While the artwork and sprites are not technically bad standing still, the second ANYTHING at all moves in the game, the whole thing falls to pieces. Sporting what cannot be more than a frame or two of animation, LROL flickers and chops its way throughout the entire game. Playing LROL on the GBA screen makes things slightly better, as the graphical glitches are not as self-evident, but try playing this thing using the Game Boy Player, and I can guarantee you that the seizure will kick in faster than watching a Pokémon marathon in Japan.

Surprisingly, the music in LROL is not half bad. When you have a game that is so obviously hacked together, it often comes as a complete surprise to see something done right. The music is fitting, varied, and does not get overly annoying. The sound effects are terrible, but I am willing to forgive that in favor of a decent soundtrack. While nothing you would want to listen to over and over, at least it doesn’t completely ruin what is already a very ruined experience.

Despite all of my hatred for this game, the final kick to the face for me came at the very end of the game. After slogging through about 30 hours of pure RPG torture, I finally presented myself before the final boss. He destroyed me. In fact, he so utterly destroyed me that I began to wonder how I could possibly have arrived in front of him at such a low level (my characters were having absolutely no trouble at all with the random encounters in the final dungeon). I did some researching online and it turns out that I am not the only one with this problem. It seems that the two best ways to beat him are to either a) level up atrociously high before mixing it up with him or b) create an insanely convoluted skill set which would also involve hours and hours of hard work. After hacking my way through this mess of a game, I opted for option c) putting it away and never, ever returning.

The point of this review is three-fold. It is, first, a means of letting you, the reader, know that you will not enjoy this game, and to pick it up is both folly and a complete waste of whatever amount of money you throw away on it. Two, it is a lesson learned that while sometimes nostalgia can get the best of all of us, from time to time it really is better to rent first rather than trust in developers who are obviously past their prime. Lastly, this review is a vent to let off the extreme frustration I have faced throughout this ordeal. Never before have I had to slog through such an obviously terrible game, and with a little luck, never will I have to do it again. In short, save your money and sanity. The next Lufia 2 has not arrived; let us look to the future instead.