The hilarious dialogue, addictive battles, and the light platforming all come together to create a game that oozes charm and polish. 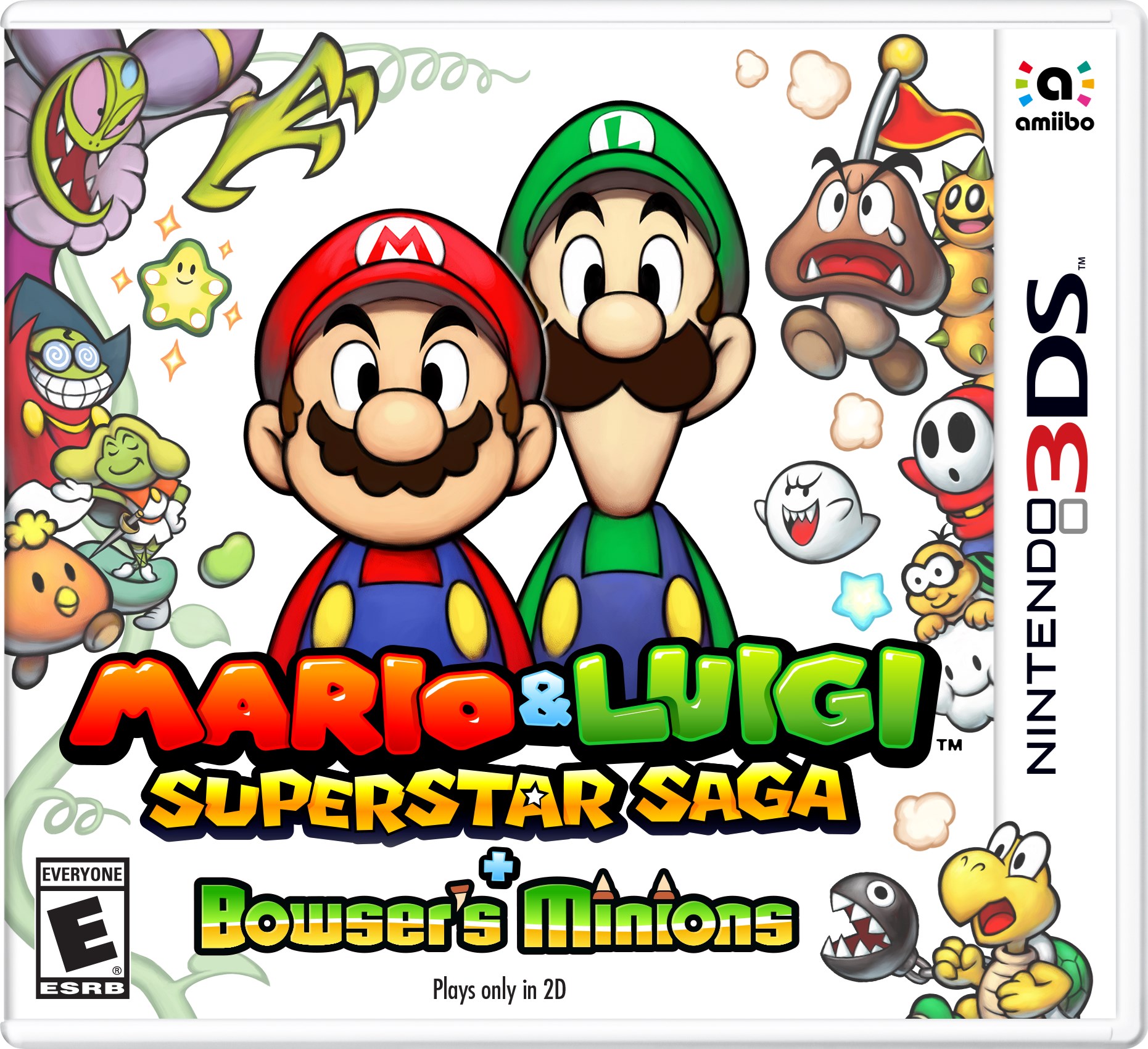 Remakes are always exciting for me. If it’s an old game I love, I get the chance to re-experience it and share it with a new crowd. If I’ve never played it, I can learn what the hype is about. Sometimes, of course, people are afraid that their childhood will be sullied by an inferior remake. This is especially true with a game as beloved as Mario & Luigi: Superstar Saga. I loved Super Mario RPG; I’ve dabbled in the Paper Mario series and enjoyed what I played there. However, since I didn’t own many handhelds growing up, I haven’t played any Mario and Luigi games, to the dismay of my gaming friends. So, I was delighted to get my hands on this title. With its sharp writing and captivating gameplay, this remake lives up to the hype, and the new Minion Quest side game is engaging enough, without being essential.

If you’re familiar with other RPGs in the Mario franchise, or other Mario games in general, the story will be about what you expect. The story opens with an evil witch, Cackletta, along with her delightfully evil and hilarious underling, Fawful, stealing Princess Peach’s voice. It’s unclear immediately why she needs it, but of course, Mario is tasked with recovering it. Luigi even comes along for the ride this time. Along the way, there are a few twists and turns, but nothing out of the ordinary for a Mario game. Nobody is going to play this game for an epic story. But, from a storytelling perspective, what truly distinguishes this game is its writing, which ranges from the delightfully silly to downright hilarious. Each character has a unique voice, and even the NPCs are often hysterical. Fawful, in particular, has a number of awkwardly amusing moments which make me laugh out loud. The ability to fast forward through scenes is a new addition to this version of the game, though I can’t imagine using that feature because the dialogue is so fun.

While I loved the writing, gameplay is Superstar Saga’s true strength, particularly in battle. On the surface, Superstar Saga is your standard, turn-based RPG. However, as is the case with other Mario RPGs, there are a number of twists. A normal attack in battle can range anywhere from jumping on enemies to using a hammer to bash them; timed button presses can either add additional damage or extend combos. There are also special moves called “Bros. Attacks.” These allow Mario and Luigi to work together to perform combo moves, expending magic points and dealing additional damage. It’s also important to use timed button presses to avoid enemy attacks. The ways that enemies attack vary, so you have to learn the different moves the they perform, the tells for the attacks, and time your dodge accordingly. Luckily, if you’re not good at dodging attacks from the enemies, you can press a button to perform an “emergency guard,” allowing you to mitigate the damage.

On the whole, the battles are a joy. The variation in the button presses allows each battle to feel different, and avoids the monotony often inherent in a turn-based battle system. It’s satisfying to get the timed button presses down for the different attacks, and watching the Mario Brothers perform combos together is often amusing. It was sometimes difficult to master the different enemy attacks and their timing, but once you do, battles become pretty easy. I still felt like I was earning my victories, rather than simply beating opponents with brute force. There is enough variation between enemies that even random battles rarely become monotonous.

Out on the map, many platforming elements are also in use to fun effect. There is no world map, but the areas are connected by warp pipes, making fast travel easy. There is a mini map on the bottom screen that indicates your current location, along with an arrow pointing to your next location. I was hoping for a little more information on the map sometimes, especially when I was trying to back track to a specific place. I spent a little more time trying to find a few specific locations than I’d like, but it was only a minor annoyance.

Between Mario and Luigi, there are a number of field abilities, including jumping and shooting fireballs. These can be selected either using the L and R buttons or using the touch screen. Using these abilities is inevitably a large part of every dungeon, and they’re also important for discovering hidden areas and treasure chests out on the map. All of these abilities give this entry the feel of a true Mario game without the hardcore platforming elements you’d find in a mainline entry. Exploring the maps and dungeons is consistently engaging and somewhat challenging, but each puzzle can be solved with a little thought, which enhances that Mario feel.

Side content is limited, but what is here ranges from fun to inoffensive. Returning to old areas and/or exploring often yields additional rewards, and there are a few optional areas which had good gear. A number of minigames, which are requirements of the story at first, can be continued later for additional rewards. Luckily, if you fail enough times, like I did on one game, you can continue anyway. This is a nice touch for a couple that are more difficult. On the whole, the side content is fun but totally unnecessary. This game is never difficult enough to require incredible gear, and it doesn’t add anything to the story.

The main draw of the side content is Minion Quest, a new addition to this version. About 2 or 3 hours into Superstar Saga, an additional menu option opens up to play as Bowser’s minions as they search for Bowser, simultaneously with the main story. You follow the story of a Goomba who was lost early in the narrative, and you recruit additional minions to help search for Bowser. Many characters from Superstar Saga make appearances, and the story does a nice job of filling in a few gaps left in that narrative. Most importantly, the sharp, silly writing from the main game is maintained, perhaps even funnier than Superstar Saga on the whole. The minions make amusing puns during their interactions, and every Fawful appearance is still a highlight.

From a gameplay perspective, though, Minion Quest is an entirely different beast from Superstar Saga. Here, the game becomes a simplified RTS game. In each battle, you choose between melee, ranged, and flying characters. The idea is to find combatants who will counter the other enemies’ strengths, using a simple triangle system. Ranged units are strong against flying units, flying units are strong against melee units, etc. You have a few options for special attacks and commands within battle, but control is pretty limited. Victory lies mostly in choosing the right troops for the match up. At first, I thought this was a pretty fun mechanic. However, even at 6-8 hours, the gameplay quickly became stale. There are far too few options in combat, so it mostly feels like you’re watching, not playing, the battles. The rock-paper-scissors element of the combat triangle becomes the only thing that matters, and it just wasn’t very fun to play around in menus for 15 minutes before every battle. On the whole, Minion Quest is worth checking out for the writing, but the gameplay wears out well before the game is over.

The updated graphics are in crisp 3D with excellent details. Everything looks amazing, and each area is totally unique. I was particularly impressed with the animations from all of the characters. The enemies have smooth, fluid movements in and out of battle and are pretty amusing. The true delight of the graphical presentation here, though, is Mario and Luigi. I could tell this game started as sprite-based, because they were just so expressive. They have exaggerated, amusing reactions to every major (and sometimes minor) event or piece of dialogue. The original game’s graphics clearly oozed charm, and this game maintains that charm.

Going by the music and sound, there’s no question this is a Mario game. The inimitable Yoko Shimomura composed the soundtrack, but she mostly relies on older Mario tunes throughout, with little flourishes that make them her own. Nothing stood out as particularly memorable, but the music was appropriate across the board. Really, it’s the sound design that makes the audio presentation of the game shine. Whether it’s the intentionally garbled voice work from Mario and Luigi, their reactions, or the battle sounds, there’s a new delight around every corner. I wish other games would pay as much attention to little details like sound design as AlphaDream does here.

For this first-time Mario & Luigi player, Superstar Saga shined. Everything people say about the series is true. The hilarious dialogue, addictive battles, and the light platforming all come together to create a game that oozes charm and polish. If you’ve never played a Mario & Luigi game, this is a perfect entry point. If you’re coming back to re-experience a game you’ve played and loved, it still holds up. If the main draw is the Minion Quest side game, this might be worth a pass, but it’s amusing enough if you’re going to pick up the game anyway. Either way, even after 15 years, I had a blast playing this game. I can’t wait to get my hands on more Mario & Luigi titles, and hope they continue the series in the future.

Whether you're a first time player, or returning to this game after many years, Superstar Saga holds up and is worth your time.