It's refreshing to see such a different take on the JRPG genre, especially one that opts for a dark and unforgiving world in place of a vibrant and carefree one. 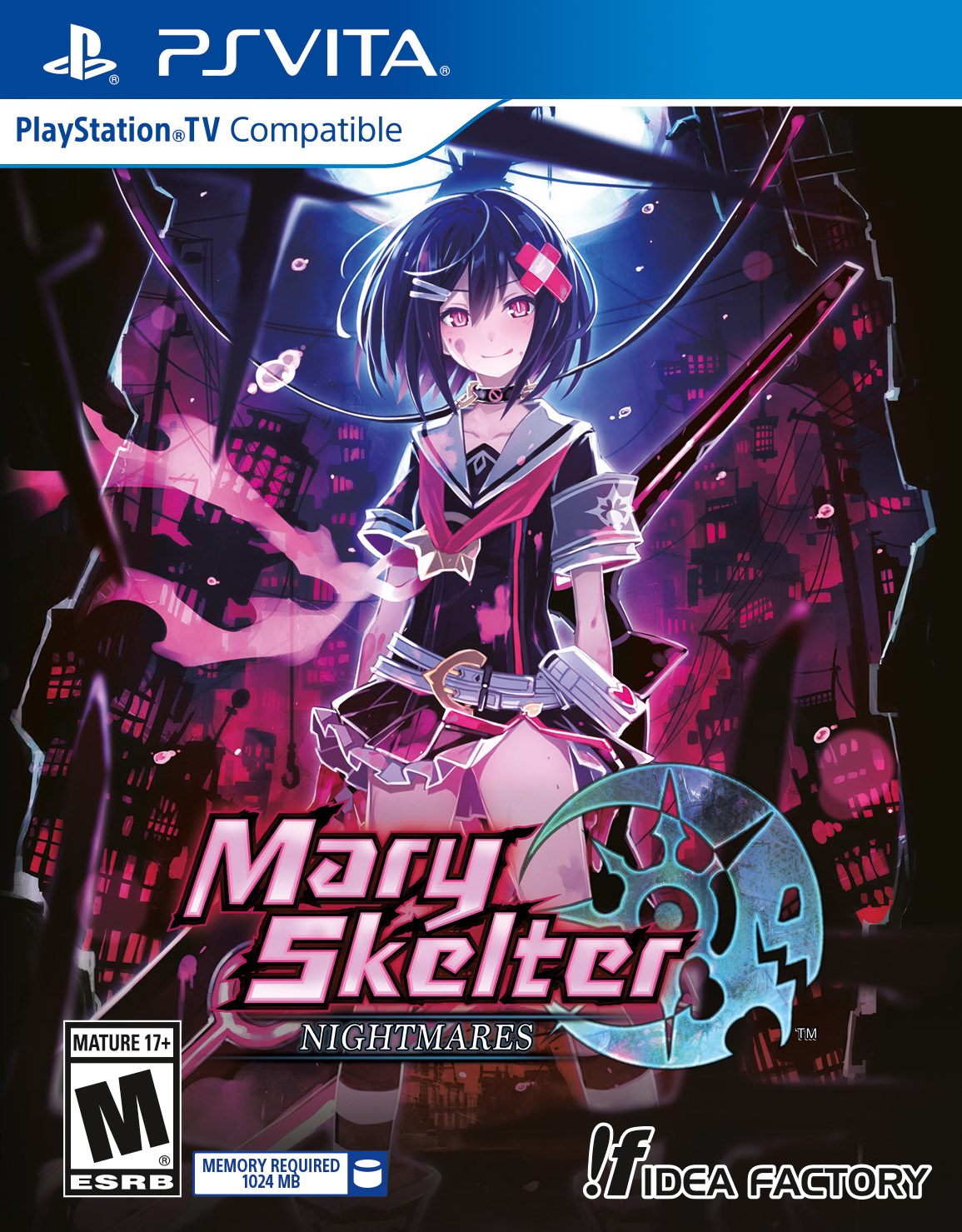 Imprisoned in a cell, all hope seems lost. Your only companion is your fellow cellmate, who also happens to be your childhood friend. Both of you have been subjected to obscene forms of torture and punishment. The only thing keeping you alive is the hope that you may one day escape from your prison and see the outside world. This is the unfortunate life of Mary Skelter: Nightmares’ protagonist, Jack, and his best friend Alice. During the game’s opening, you learn of an unnamed city that has been swallowed by a living barricade known as the Jail. Entrapping the civilians, the Jail begins to create monstrous atrocities known as Marchens that terrorize the remaining survivors. Within the first few moments of gameplay, you experience the horrid reality that is Jack and Alice’s world.

You can probably imagine the many ways this story can unfold. However, I’m sure most players will be astounded, like I was, when the protagonists are saved by a girl wielding large scissors and identifying herself as Red Riding Hood. At this point, we start to learn more about the Jail, the Marchens, and the surviving members of the human race, as well as the mysterious girls classified as Blood Maidens. This marks the beginning of what can only be described as an unforgettable adventure for Jack and Alice as they attempt to escape the Jail with the other survivors.

Most of Mary Skelter: Nightmares can be separated into three portions: dungeon crawling, turn-based battles, and cutscenes. Cutscenes appear between battles or as events you trigger in your free time by exploring Dawn Headquarters and the Liberated District. You start off with a small group of characters, but as you progress, the roster of fairytale-named characters continues to expand. You never really overcome the feeling of dread these characters face, especially when it comes to hearing the wails and screams of the Jail — a living organism itself. Sadly, there are points where the story feels a little long-winded and the dialogue seems repetitive. Talking points for the characters ended up being very similar, and the triggered character events often feel predictable. This is especially prominent around the midpoint of the game, where the party is still discovering the remaining Blood Maidens. Overall, I still found the story very engaging, as it expertly combines aspects of dark fiction with the JRPG tropes fans have come to love.

As for the characters, I found them to be incredibly unique. They were one of my favorite parts of the game, as most of them are inspired by their fairytale counterparts, such as Red Riding Hood, Snow White, and Sleeping Beauty. Another one of my favorite parts of the game involves utilizing their unique special skills, known as Blood Abilities, to access different sections of each dungeon. Each of these Blood Abilities acts as a homage to the character’s respective fairytale, which I personally found to be very amusing. For instance, Red Riding Hood has the power “Body Nipper” to cut openings in dungeon objects, which is a reference to the lumberjack that freed her from the wolf in her original tale.

I especially like the character designs because they truly feel like modernized versions of the storybook characters they are supposed to represent. Each of the party members (with the exclusion of Jack) have five corresponding outfits, each a testament to their personality and namesake. For instance, each of the outfits for Red Riding Hood utilizes a different form of the iconic hood associated with her character. During the game, the Blood Maidens may undergo a transformation and enter their Skelter State. In this state, the avatar’s appearance changes to one of primal desire and bloodlust, emphasized by their silver-white hair and pink eyes. These also often act as a tribute to the original fairytales. Alice, for one, sports a pink bow that largely resembles the one worn by her animated Disney incarnation. While the general depictions of these avatars are both incredibly charming and sadistic, some may be turned off by their risqué portrayal during their Skelter State.

As for the graphics, they were astounding. As I mentioned earlier with the character designs, I love this game’s presentation, especially when it comes to the blood splatters. Rather than sticking with typical coloring, the developers opt for pink blood splatters that engulf the screen during intense moments of combat. This helps emphasize the stark contrast between the young, innocent protagonists and their brutal encounters with the unforgiving world of the Jail. My biggest issue with the presentation is that I wanted to see this style utilized in more places, especially in battles. Many of the attacks and actions used by the characters lacked unique animations, which started to make all of the characters’ actions feel the same. Adding those animations would have made the random encounters more engaging for the player. Despite this, I still found the visual style superb, making it one of my favorite parts of the game.

Unfortunately, the gameplay is where this game suffers the most. Mary Skelter: Nightmares is largely linear with the option to re-explore areas in order to complete missions and find hidden treasures. The missions tend to be conventional and often insignificant in terms of both story and rewards, which is really disappointing. Combat, however, does make great strides to experiment with the typical turn-based formula associated with most JRPGs. The “Massacre” and “Blood Skelter” modes contribute a whole new aspect to battle, both aesthetically and in terms of player experience. When a character deals severe damage against an enemy or exploits its weakness, blood may splatter on both the screen and Maidens; once enough blood accumulates, they enter Massacre Mode, which increases their strength while also unlocking access to special skills. Of course, this comes at a potential price, for every time a Maiden changes states, she risks entering “Blood Skelter” mode and going on an uncontrollable rampage. Still, this was my favorite mode to enter, as characters would sadistically smirk, laugh, and indiscriminately attack with powerful skills, such as raging torrents and massive quakes.

Jack possesses a unique skill to counter Skelter Mode: the Mary Gun. This gun cures a corrupted ally, but at the cost of using Jack’s own blood, which takes a turn to replenish. This means it’s crucial to monitor the Blood Maidens’ corruption levels in order to be successful, especially in later portions of the game. Outside of combat, you can customize characters and weapons by spending the blood crystals you gather from enemies. While the customization menu and controls are easy to manage, the actual differences among these classes seem a little arbitrary, except for the cosmetic differences. This is especially true because once a main class is chosen, a character has permanent access to that class’ roster of moves, even after changing again to another class. While the classes do determine usable weapons and passive skills, these factors are often insufficient to justify a change in classes, as each change requires you to grind and collect loads of blood shards. This was never enough to make me stop playing the game altogether, but it did make the experience feel a bit limited.

To make up for the mediocre gameplay, however, is the soundtrack. The music is easily the strongest part of this game. The opening theme really pumps up the player while also preparing them for the overall chaos that ensues within the confines of the Jail. The battle themes are all rhythmic and catchy, while syncing well with the characters’ actions in battle. Additionally, each of the dungeons has its own unique soundtrack, which fits perfectly with the aesthetics. For instance, the City Streets uses a track that resembles the sounds you would expect to hear in a parade or circus, while the Graveyard has an eerie bell and chiming lullaby that really sends shivers down the spine. Each track fits the atmosphere and enhances the enemy encounters and exploration of the dungeons. It is masterfully executed.

Overall, I had a great time playing Mary Skelter: Nightmares. It’s refreshing to see such a different take on the genre, especially one that opts for a dark and unforgiving world in place of a vibrant and carefree one. Parts of the game could have used a bit more work, namely the character customization and growth, but generally, the game was fun and kept me engaged. The storyline was original, the visuals were stunning, and the music was simply astounding. At times, the combat and dialogue did feel a bit a stale, but for those that love JRPGs and are looking for something darker and grittier, I would definitely recommend playing this game. Idea Factory International took a lot of risks with this, and for the most part, I think they really paid off.

Mary Skelter: Nightmares varies nicely from your typical turn-based JRPG. With a darker atmosphere than most games, the art and music is really what defines it. If you can overlook some of the repetitive combat and dialogue, this game has a lot to offer and provides an overall great experience.