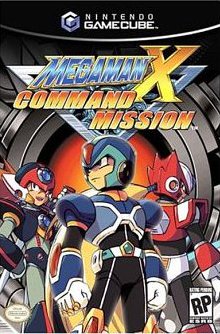 Let me first start by saying that I am a Mega Man X freak. I’ve always followed the series closely and I was shocked when I learned about Mega Man X: Command Mission. To put “Mega Man” and “RPG” in the same sentence seemed like an oxymoron. However, Capcom has created a surprisingly solid entry to the franchise that should appease Mega Man fans.

MMX:CM starts when X and Zero, the world’s best Maverick Hunters, investigate some abandoned ruins for signs of Mavericks (evil robots.) They are betrayed by their friend Shadow, who has joined the Rebellion Army: an army of Mavericks whose cause is to take over the world. X gets separated from Zero and ends up in Giga City, a city in civil war between the Rebellion Army and the city’s police forces. X joins the Giga City forces and joins up with several new characters in his quest; Spider- a bounty hunter, Marino- a thief, Axl- his long lost friend, and more.

The characters themselves are pretty neat, but they suffer from the poorly written story. It’s not uncommon for a character to join you and then drop off the face of the Earth for one chapter, and then appear out of nowhere in the next chapter. With the exception of X, Zero, and Axl (who are the focus of the story,) the supporting characters could have been better integrated into the story.

The villains aren’t very innovative at all. The main villains have decent roles, but the game’s eight sub villains were poorly done. Each looks like a previous villain in the series; for example, Wild Jango looks exactly like Neon Tiger from Mega Man X3 and Mach Jentra is a spitting image of Storm Eagle from Mega Man X. It would have been nice to see some authenticity, since the Mega Man X series as a whole has become a little stale as of late.

The gameplay in MMX:CM revolves mainly around the battle system, which is addicting. The system is turn based and extremely innovative. Each character has up to 3 attacks at their disposal per turn; their main weapon, and two sub weapons. The main weapon does fixed amount of damage, but the auxiliary weapons can be changed depending on your enemy; they can do extra damage, steal items, or boost your stats. These weapons are mapped to the X, Circle, and Square buttons and you can string them together simultaneously to create a combo. Pulling off attacks feels so great, and it never gets old.

At the beginning of every turn, your character will be awarded “Weapon Energy.” This energy is similar to the “Force” system from the Wild Arms series; in order to use a certain attack, you must have enough weapon energy. If you can gather enough, you will be able to perform an “Action Trigger,” which is a limit break that will wreak havoc on your foes. Every character has a different Action Trigger with a different gameplay element; X charges his blaster and releases a deadly blast, Zero performs wicked swordplay, and Axl shapeshifts into conquered foes and uses their special attacks. Every trigger is uniquely different and fun to perform, although some can be a bit frustrating at times.

During battle you’ll notice that enemies have an orange-yellow meter below their feet; this is their vitality meter, and if you can destroy it, you will be able to perform a “Final Strike” move. This is the best move in the game, allowing you to control all of your party members at once as they annihilate one enemy. You only have a few seconds to perform the move, but you can rack up ridiculous combos that will net you bonus Force Metal (which shall be explained later) and money at the end of the fight. So, simply put—do this as often as you can!

Each character also has a “Hyper Mode” form that they can transform into, which is a stronger and faster version of themselves. Once you shift into Hyper Mode, you only have a set amount of turns before you revert back to normal, so you’ll want to use it often, but with care. Hyper Mode is a crucial part of boss battles and can quickly determine the fate of a fight if used correctly.

Outside of battle, you will collect “Force Metal” which you can equip to your characters to give them stat boosts. Most force metals give you a partial immunity to physical and elemental damage, as well as status effects. When you obtain a special party member late in the game, you will have the ability to merge Force Metals together to get stronger versions. There are hundreds of options available, and it’s unlikely that you will use even half of the possible combinations in one game. However, this isn’t a major problem because it is a simple system that doesn’t take very much of your time. Unfortunately, it’s not very compelling. I hardly ever used it because there was never an incentive to. As long as you make sure that your characters are equipped with the best that you can afford, you won’t have any problems.

The only problems with the gameplay is the healing factor. Healing is done with the use of a “Sub Tank,” which holds enough healing power for everyone in the party. It is possible to heal one character or all of them. Unfortunately, the Sub Tank is communal and only has a set amount of energy. Once you deplete the Sub Tank, you are left without healing abilities until you can travel back an inn and replenish. This is a travesty since Sub Tank energy tends to run out very quickly and there are few other ways to heal your characters effectively. This is extremely annoying. The game would have been better suited with an item that could restore Sub Tanks. I can’t tell you how many times I’ve run out of energy during a tough boss fight and lost because of it. </p.

The game features some excellent cel shading. It is on par with that of Wild Arms 3 and Viewtiful Joe. The game is also extremely colorful and every character looks great. There are some great shadowing effects as well.

The game also features in-game cutscenes that work well, and are fun to watch. While they’re not on par with, say, Shadow Hearts: Covenant or Digital Devil Saga, they’re still engaging.

I did have one major problem, though. While I feel that Capcom did a good job of recreating the Mega Man world, they didn’t do a good job of translating the Mega Man spirit into RPG form. I never truly felt like I was in the Mega Man universe. I believe this was due partially to the poor story, but also to the level design; the game’s dungeons are static and boring, and you’ll tire of them quickly. Also, the enemy designs are recycled too much; they are great (and recognizable to MMX fans,) but there’s only a handful of them. Things do get spiced up near the end of the game, but for the first few chapters, it’s a bit off-putting to fight a slew of monsters only to see them again in a different color in the next chapter.

This is arguably the game’s weakest point. MMX:CM is riddled with all kinds of audio problems. First, the voice acting is bad. X sounds like a boy scout, Zero sounds like a surfer, and Axl sounds like a geek with a lisp. Many of the voiced cutscenes sound stilted and awkward, and they suffer from poor dialogue.

Second, the soundtrack is so bland it hurts. It’s techno and rock with a futuristic twist. There aren’t any catchy tunes, and a more forward score would have suited the game better. As a long time Capcom music fan, I was really disappointed. The MMX series is not known for bland music.

Third, the sound effects aren’t the greatest, either. Many of the enemies’ sound effects are deafening during battle, drowning out both the music and the voices. For example, at the beginning of a battle with a flying enemy, you’ll hear an annoying helicopter noise that doesn’t match the mood. The sound will play until you kill that enemy, and then the music will fade in. This isn’t enough to make you rip your hair out, but it is a sign of bad audio programming.

Despite some obvious flaws, Mega Man X: Command Mission is a solid RPG with one of the most innovative battle systems I have seen in years. It’s a great starting point for an RPG series in the Mega Man X mythos, but there is a lot of room for improvement. If you are a Mega Man X fan, you owe it to yourself to at least try it out.