...if you're going to play a game that demands grinding, this is one of the best. 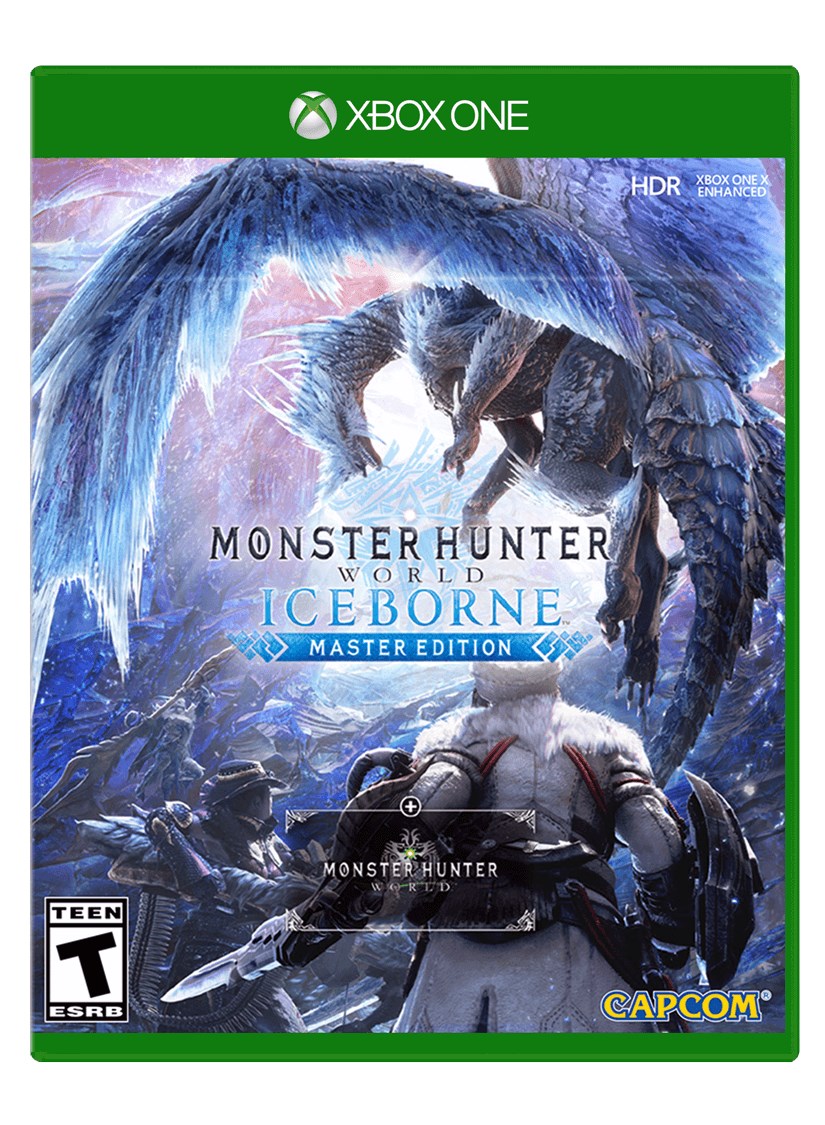 Monster Hunter is a series I’ve gazed at from afar, too taciturn to grab it by the horns and wrangle it to the ground. Opportunity struck this winter as frigid Iceborne swept through the PC landscape. I muscled my way through the core campaign and began my trek into the Hoarfrost Reach. Most of the time, I stood frozen in the city commons, head darting about. Everyone around me seamlessly bought this, crafted that, and sauntered off together to capture yet another monster; meanwhile, I was still trying to untangle myself out of my own net. By journey’s end, I felt much more familiar with my icy brethren, though still a bit of a stranger. This isn’t my home.

After conquering the meaty core campaign, the Handler and protagonist head off on an expedition in the Ancient Forest, soon to find that the native Legiana engaging in odd migration patterns. Following the flock over the sea, those in the encampment discover a new, tundrous land just off of Astera. Here, players can sign up for intermittent missions once Seliana, the new settlement, is established. Although players may think that the DLC will take place exclusively in this new land, the story takes players back and forth between the New World and the Hoarfrost Reach, which is the only new map to explore. Over the course of the campaign, the story is as serviceable as the core campaign’s; that is to say, it’s pleasant yet thin.

Gameplay ensues as one has come to expect with Monster Hunter: take mission, then kill or capture a monster. Occasionally, players are yet again tasked to discover tracks of new monsters, but these missions feel less grindy this time around, as tracks occur more plentifully while on investigations or optional quests. Personally, I find the pacing in Iceborne far more palatable than in the base game. Enemies frustrate less, feel much more possible to vanquish with one’s desired build, and behave more uniquely. Some old friends rear their heads tastefully, while new monsters continue to demonstrate creativity on the developers’ end.

I can’t say Iceborne adds anything substantively new, but it certainly offers more of what players want; who can take issue with that? Some of the balance and design decisions feel smoother in this expansion, and the few new additions — like a grappling hook and minigame — accentuate what already makes Monster Hunter engaging. In the case of the clutch claw (the aforementioned grappling hook), players can use slinger ammo after hooking onto a monster’s body. After attaching oneself to their prey, one can move to different parts of the body by using stamina. Staying on for too long expends stamina, eventually causing the monster to throw the player off. Doing attacks to different parts of the body has various effects. For instance, grabbing onto the head and attacking causes the monster to take minor damage and run straight ahead; if the monster hits a wall, they take high damage and topple over, giving everyone an opportunity to stack on even more punishment. These moments can be some of the most exciting in a fight and give everyone, no matter what weapon used, an opportunity to get up close and personal.

The dramatic visuals and interactions with monsters continue into Iceborne: the developers clearly put a great deal of care into each new monster’s introduction cinematic. Some of the debuting monsters show off their strength by absolutely decimating previous monsters in the base game just to drive home the point how terrible the new critters are. In fact, these interactions and turf wars vie for the most exciting parts of the game, including actual combat.

While Monster Hunter has been endlessly praised for its combat and all its intricacies, I have immediately seen through the thinly veiled grindfest that it is. Yes, some of the encounters can feel like a Dark Souls fight, and, yes, they cut through the mindlessness of simple fights that many RPGs boast; also, I recognize every fight is a boss fight. Beneath that all, though — if we’re to be honest — most fights play out the same. Every monster has some different attack pattern, engages differently with the environment, and requires different preparation, but the truth is that players do a healthy amount of rinse and repeat in terms of tactics. This wouldn’t be a problem at all if the game didn’t ask that players grind for new equipment, skills, and doo-dads.

Iceborne expects players to outfit themselves differently for each battle, which plays to the game’s strengths. Preparation is one of the most important elements of the game design, since elemental defense and attack, ailment reduction, and understanding a monster’s weak points are all integral to victory. Unfortunately, this means grinding. After all, unless one is extremely lucky, one is unlikely to gain all of the drops needed for water resistant gear, poison resistance, and fire attack, just to name a few. What results is a grind against weaker foes which turn out to be the simple, mindless fights that Monster Hunter ostensibly tries to avoid. If one isn’t careful, they can find themselves in frequent loops of punishingly difficult fight, easy fight, easy fight, easy fight, followed by a finally satisfying encounter five to ten hours later.

That’s my primary gripe: the time investment. The game would be so much more satisfying if all of the time investment was meaningful, but more than half of it is either simple fights or excruciatingly difficult fights that just cause frustration. In between the chafe and the gristle, though, are some adrenaline-infused, gripping tussles like I’ve never encountered before, save for a few precious other action RPGs. Find a couple friends to play with, and all challenges play out like stories full of laughter, references, and teasing. This is only one part of the game, though.

Another part is the visuals. In most of my reviews, I comment briefly on the art direction and how it hurts or helps an experience, but in Monster Hunter World: Iceborne, it is the experience. Yes, fighting monsters is why we’re here, but the actual world itself amplifies everything; it provides context and meaning behind everything players do. To those who engage in Iceborne at a slower pace and take everything in, treats abound. From the new icy landscape to Seliana and one’s home, Iceborne feels like it should be sipped rather than gulped down. The developers clearly want you to slow down and take in what they’ve built, and to be honest, I had several moments where I did just that. Simply walking around peacefully in the wilds struck a chord of awe in me. This feels like a place that could exist, and that we’re only seeing a fraction of a percent of it. Seliana is a small settlement, relatively speaking, but what’s there has mountains of detail and care poured into it. The gathering hub and player’s personal home both have furnishings that can be altered and interacted with. One can take their palico (anthropomorphized cat companion) into the foot bath to play with them, which is surprisingly joyous. Players can take a trip to the sauna or open bath, as well. Several optional missions offer decorations for players to outfit their homes with, as well, authentically making it their own space. For those seeking active engagement in terms of combat, these details won’t add much, but I feel like overlooking this would be missing a lot of what Iceborne has to offer.

Audibly, the music consistently complements each thrilling encounter, with dramatic strings and horns bringing cinematic scenes to life. The voice acting is competent enough, even if the lip syncing is a bit cringe-worthy. More than once, I took issue with the controls, as my character just wasn’t doing what I commanded him to do; at times, I felt as if the game was eating my inputs. Unfortunately, the result of such problems sometimes meant my death and a thirty-minute time loss. As anyone following Iceborne has likely noticed, several people have complained about technical issues ranging from crashing to slowdown to lost save files. I’ve sidestepped most of these issues, but buyers should be aware of the present technical state of the game and potential irritation.

Iceborne is a stark improvement over the core campaign. Not only that, it almost feels like an actual sequel in terms of content and not just some small DLC pack. I’m no Monster Hunter veteran, but I see the appeal. Unfortunately, given its demands — on one’s time and to play how it wants you to play — I can’t recommend this game to anyone but those who have time to commit and who don’t mind grinding. Of course, if you’re going to play a game that demands grinding, this is one of the best. My enjoyment ebbed and flowed, but when the game hit the right stride, I was having a blast. I appreciate the sense of adventure and the opportunity to tackle truly grand monsters, but I’ll be hanging up my bowgun up for the foreseeable future.

For the time rich, systems are masks for grinding, controls may frustrate.

If you're looking to dive into a world and have the time to spare, Iceborne expands on an already massively satisfying experience.