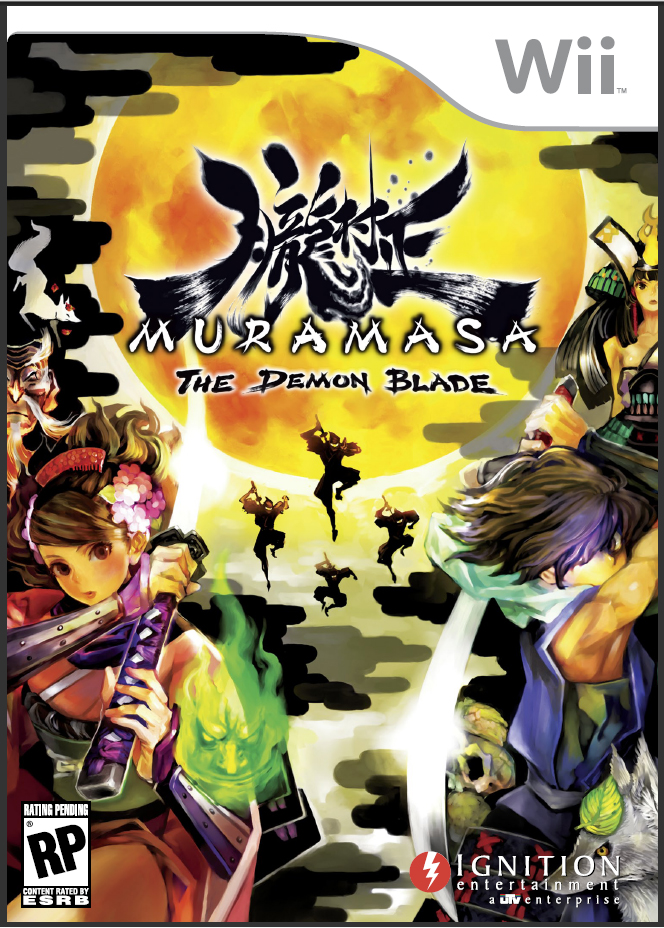 I’m not sure I should even be writing this review.

Take a peek at the top of this page and you’ll see why. The site is called RPGFan because, well, we sort of try to focus on RPGs. Vanillaware’s latest offering, Muramasa: The Demon Blade, is not so much an RPG as it is a vaguely RPG-esque 2D hack and slash game. Sure, it’s got HP, money, and even level ups. Aside from that, the fundamental game is hardly different from any other side-scrolling beat em’ up.

Of course, if you’re a fan of traditional role-playing games like Dungeons and Dragons, you could just as well argue that virtually every modern JRPG is not really role-playing. How we define this quirky genre makes for a fascinating debate, but one that is best reserved for the forums and editorial page. Since you are reading my humble review, I’ll assume that you aren’t too obsessed with the game’s exact classification –you just want to hear if it is any good.

If that last line sounded a bit lukewarm, I’m afraid it can’t be helped. Muramasa was sort of a love-hate relationship for me, and I’ve just been hurt so many times, my heart can’t take it! The basic concept is really simple: pick either Kisuke or Momohime (they play exactly the same), travel the country side killing things with swords, repeat. With no tri-Ace skill systems or Persona s-Links, the game relies almost entirely on the fun of the whole “killing things” part.

And it is fun. Action is fast, fluid, and occasionally even a bit hectic. Hone your katana technique, and you will be able to chain air attacks and combos into hundreds of strikes. You can block, parry, counter, and unleash various special moves that depend on your blade. There’s even a cool, screen-clearing quick strike that is usable at fixed intervals whenever you unsheathe a different sword.

As you’d expect in a role-playing game, you’ll occasionally level up to boost your HP and strength, and you can customize your character by equipping accessories and katana, the latter three at a time. As you gather materials and soul energy from battle, you’ll be able to forge stronger swords (over 100 in total). There are standard and large size blades, and each one has its own unique special attack. The game also features an amusing cooking system where one can boost their stats and gain other bonuses by wolfing down rice balls and eating at restaurants.

Not sold yet? That’s too bad, since here is where the criticisms start. Put bluntly, Muramasa is a shallow game. While the action looks feels cool, it’s also extremely friendly to button mashers. You really don’t need to know what you are doing to fly through the game; just spam the attack button and jump around, and you’ll get through most encounters. You’ll find much deeper character customization in Mega Man, and the linear nature of the sword forging system turns your favorite katana and its awesome special move into a useless hunk of metal very quickly. Turnover rate for new swords is about ten minutes –not that you’ll be able to tell the difference between most swords, since the special attacks are neither useful nor easily distinguishable. Even if they were, you probably won’t be using special attacks often, since they drain your sword’s power level, causing it to temporarily break in half.

With no other weapons, no unique magic or skills, no differences between the protagonists, and no unique character development, the game basically consists of killing things and sometimes eating. Did I mention that it’s an incredibly easy and short game? You can beat it with both characters in under 10 hours, and aside from using a few more healing items, I couldn’t even tell the difference between normal and hard mode. Maybe my concept of game difficulty has been eternally violated by Demon’s Souls, but I was pretty bored with Muramasa after about the five hour mark. It’s accessible but not very satisfying.

Muramasa’s strongest point is probably its visual style. The art design is, in a word, phenomenal. Backgrounds are richly colored, and feature detailed architecture that drops you right into ancient Japan. From the night cherry blossoms to the bamboo forests to the imperial cities, each region really has its own personality and attractiveness. NPCs and enemies alike carry their own style and endearing designs. Boss battles are marvelously fantastical affairs, thanks to the sheer size and beautiful animation of each beast.

I loved the little details, such as the silhouettes of people in their homes that you see when exploring a town. I also loved the animations of both the preparation and the eating of food. The game offers a sumptuous crash course in Japanese cuisine for the uninitiated. Even with some background recycling and a relatively small variety of non-boss enemies, Muramasa is hands down one of the best looking Wii games of all time.

No real complaints here. Muramasa has a sweet soundtrack that blends traditional Japanese orchestral music with a pinch of electronic flair. Whether you are dashing across sprawling fields or ascending an ancient castle, the music fleshes out the experience superbly. It’s a treat for the ears, as is the rich and authentic classical language. Kisuke’s VA was my favorite overall, though that may be largely due to how amusingly his dialogue is written. The worst that can be said for the sound is that effect noises are fine, but don’t particularly stand out in any way.

Muramasa is the tale of Princess Momohime and the exiled ninja Kisuke. The princess spends most of the game in an ethereal spirit form, as her body has been hijacked by a master swordsman. Meanwhile, Kisuke is suffering from both amnesia and a horde of ninja assassins trying to hunt him down and kill him.

The twists and turns along each character’s pathway are mildly interesting, and there is a good helping of humor. I liked that the game offers multiple endings based on how you play and what swords you ultimately find. It offers some much-needed replay incentive, provided that the story translates well enough to keep you interested.

Muramasa’s controls are unimpressive. With the ability to use the Wii remote, classic, and GameCube controllers, you have some variety that should suit a plethora of styles. Unfortunately, you cannot actually customize the button inputs. This is particularly annoying because the game lacks a dedicated jump button; you have to press up and and use the control stick to navigate platforms in the air. You get used to it, but it is far from ideal. In addition, there’s no regulating your movement speed; it’s either stand still or run at full speed at all times. “Slippery” is the best word to describe it, and it adds a challenge to boss fights, but not in a good way.

Precise and responsive controls are critical for action games. In this regard, Murasama is the opposite of Ninja Gaiden (the newer version), where you have sharp and accurate controls that you have to master. Ninja Gaiden gives you all the tools you need, and the challenge comes from seemingly impossible waves of monsters that punish even small mistakes. Muramasa, on the other hand, feels loose. You really don’t need to get good at timing special attacks, evades, or air combos, since enemies are stupid and weak. This makes Ninja Gaiden extremely satisfying, while Muramasa feels like it was designed for kindergarteners.

It’s fitting that Muramasa was released on the Nintendo Wii. It’s a “style over substance” game that is not likely to hold your attention for more than a few days. In other words, it’ll fit right in with the rest of the system’s library. To be fair, it’s a few notches above your typical Wii Lumberjack-style game. The action is fast and amusing, the artistic design is fantastic, and there are occasional difficulties that may even exhilarate (there are challenge battles scattered around the game world. Try them ten clicks below the recommended level and you’re in for a treat). The game mechanics, however, have “casual” written all over them. Muramasa is ultimately the sort of fleetingly enjoyable title that entertains for a few hours every six months before going back on the shelf.