...there's not much memorable about Nights of Azure, and that truly is a shame. 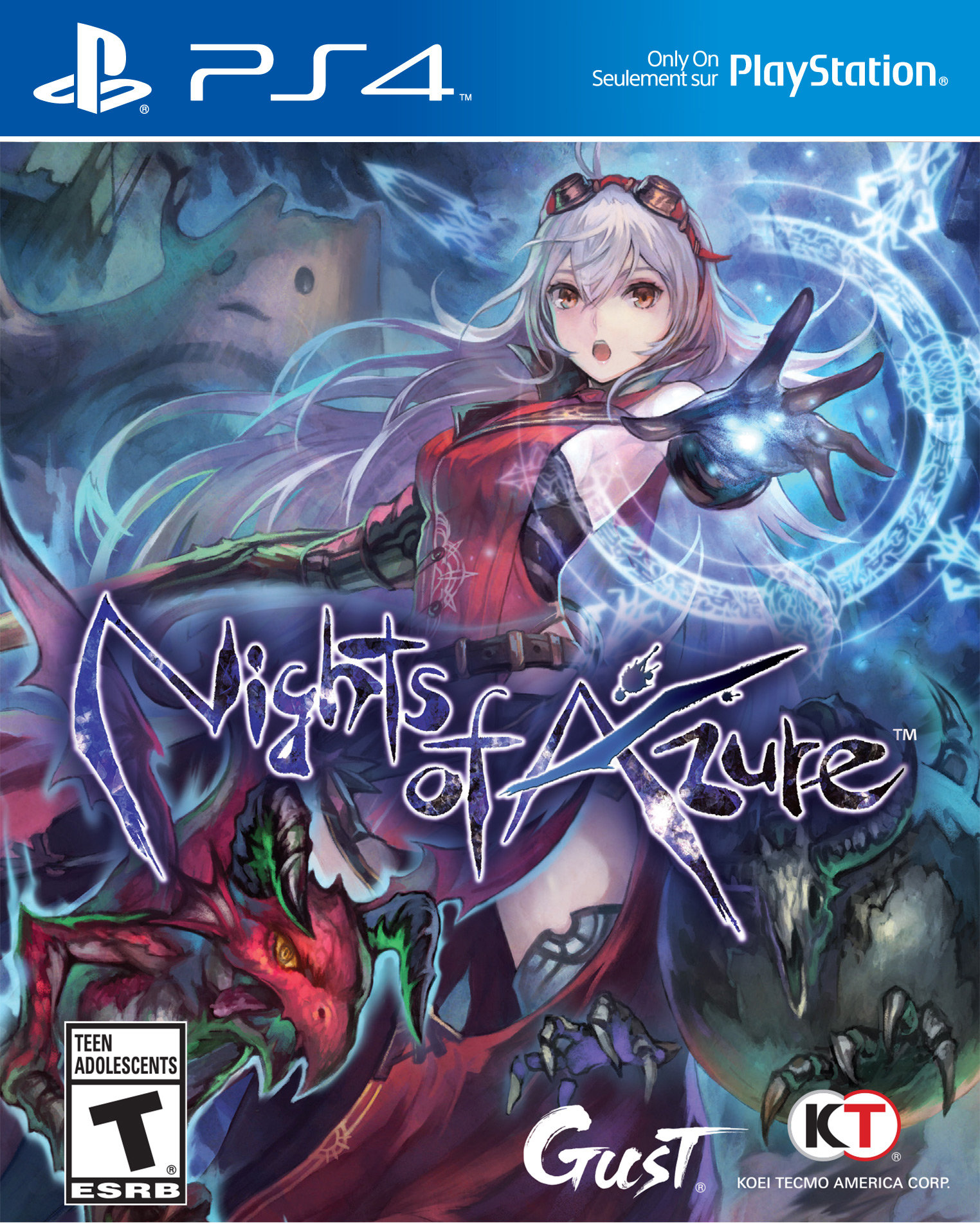 Saving the world is usually a no brainer; protecting the world means protecting everyone who lives in it, including the ones you love. But what would you do if the person you loved most had to sacrifice themselves in order to save the world? Nights of Azure asks this question. Created by Gust, famed for the much cuter and sweeter Atelier series, Nights of Azure is a much darker and more action-packed game than their well-known franchise, but does it show signs of a new direction for the studio?.

The story is set years after the defeat of the Nightlord, a demon who wanted to bathe the world in eternal night. After being slain, his blue blood showered the land and brought forth many evil creatures to wreak havoc. At the start of the game, Arnice, a half-human half-demon holy knight who works for the enigmatic Curia, arrives on Ruswall island, the main source of the lesser demons, to thwart the evil for good. On the island she meets with her close friend, Lilysse, who has been chosen as the Saint, a woman who must be sacrificed in order to save the world from evil, and Arnice finds her feelings obstructing her mission.

The darker tone of the game gears you up for an intriguing world, but the plot dashes these hopes by relying on recycled tropes. Too often does Nights of Azure lean back on light comic relief that we’ve seen for years in RPG history, and this clashes with the main issues at the heart of the story. Arnice’s issues with her employers are often brought up in passing only to be brushed aside in favour of some lewd jokes about the female characters. Worthwhile plot points are brought up, but most are never fully explored because the writers are too interested in showing you time and time again just how bad Lilysse’s baking is. I’ve seen the bad cook trait too many times to find it remotely satisfying any more; and with a basic plot as generic as “save the world or save the girl” I’m left bored out of my mind.

What saves the narrative from being a complete disaster is the relationship between Arnice and Lilysse. The two companions start off as close friends who admire and worry about each other, but their relationship quickly becomes romantic. The time they spend together provides some of the best moments of the game — the couple get excited one night because Arnice can actually put her mission aside and spend time stargazing with her beloved, and the two share a sweet moment of happiness. Even though the two characters fit the tsundere and cute-clumsy girl duo mould, they narrowly prevent the plot from being a disaster.

But Arnice can’t stay with Lilysse forever, as she must head out into the streets of Ruswall most nights and face the demons who lurk on the island. Here, Arnice is given a set time limit to wander through linear paths and corridors as she battles droves of creatures who stand in her way. Each chapter is set up the same — start at point A, get to point B, and fight the boss before the time runs out. This gets boring very quickly. You’ll mostly be fighting hordes of enemies, and the hack-and-slash combat is easy to grapple with and dynamic. Executing combos feels great and seeing critters’ blue blood splattered across the pavement is very satisfying. Arnice controls well, with quick, responsive sword strikes and fast dodging that feels smooth, but more than once I found myself reaching for a jump button when there wasn’t one. Battles kept me entertained for a while but when I hit the halfway mark I found any joy I felt had sapped from me, because most encounters required very little strategy. A few button mashes easily decimated swarms of demons at once, which I found disappointing. You gain new weapons as you level up, but even then my tactics barely changed, I was cruising through each chapter. The ease of the experience is a huge let down, and the lack of varied attacks made me feel like I could’ve sleepwalked through the game.

Aside from swinging Arnice’s sword around in battle, she’ll be accompanied by four demon companions to help combat the night. These critters, known as Servans, can be summoned on the battlefield to help fight alongside Arnice. You collect these by acquiring fetishes, and each one has a distinctive role in battle and a unique personality. My particular favourites were the bomb creatures, who are ever anxious of blowing up accidentally. While a cute addition, you have little control over the Servans, and remain yet another opportunity squandered by Gust. Aside from four basic commands that are simply attack, charge, heal and evade, plus the ability to unleash their special moves, you can’t guide who they attack or when they heal. One aspect they do affect is Arnice’s ability to transform into various demon forms — depending on how your party of demons is set up, Arnice can access a small variety of transformations that enable her to boost her attack power, speed or skills. These forms do add some variety to Nights of Azure’s formula but require very little strategy to utilise them effectively. It’s very easy to get through the game without ever using one of these. All these extra additions attempt to add depth but fail to really change the fundamentals or your tactics.

While not slaying Demons, Arnice spends her time at the Ende Hotel, which acts as a hub. Here, she can buy equipment, accept sidequests and missions, or plan daytime activities. You’ll spend most of your time in the hotel scrolling through menus and taking on empty fetch quests and hunts which add little to the story and only exacerbate the repetitiveness of the combat. The daytime activities are particularly lacklustre, as they provide a false opportunity to see Ruswall in the day time — instead you’re provided with a wall of text after your nightly adventures briefly explaining what Arnice did during the day. It’s yet another wasted opportunity, which could’ve been different minigames to break up the monotonous combat, or simple exploration to expand on the world of Night of Azure. These quests do nothing to enhance the experience and feel like an afterthought programmed in at the last minute.

Fortunately the game looks great and sounds fantastic. Though Ruswall is blanketed in night throughout your quest, the in-game character models look gorgeous and provide a burst of colour in an otherwise dreary landscape. Arnice’s demon transformations really show off the beautiful artwork to its best, particularly the Phantom form, which highlights its magical and skill-based proficiencies whilst retaining a powerful and ethereal image. The music also more than makes up for the structure of the game. Gust’s sound team does a fantastic job with the music, and their music remains Night’s of Azure’s strongest aspect for me. The tracks range from dynamic choir and guitar pieces that make you feel powerful, to softly gentle piano pieces which capture the tender moments between Arnice and Lilysse. These aspects make up for some of the shortcomings of the adventure.

In short, Nights of Azure ends up as a game that promises a lot but fails to truly deliver on anything effectively. There’s plenty to enjoy when you first start off, such as the monster collecting and the combat, but after a few hours these aspects start to wear thin. While the repetitiveness of the whole game left me feeling a little blue, I found solace in the central character’s relationship and the music. Die-hard Gust fans might find something of note to praise, there’s not much memorable about Nights of Azure, and that truly is a shame.

Repetitive combat, bland and unoriginal story, so much unrealised potential.

While it starts off fun, Nights of Azure gets boring very quickly and never seems to fully utilize its array of other features.