Olympia Soirée is proof positive that an emphasis on romance, or that being “a game for the female audience,” should never by itself be used as a point of contention against a game. 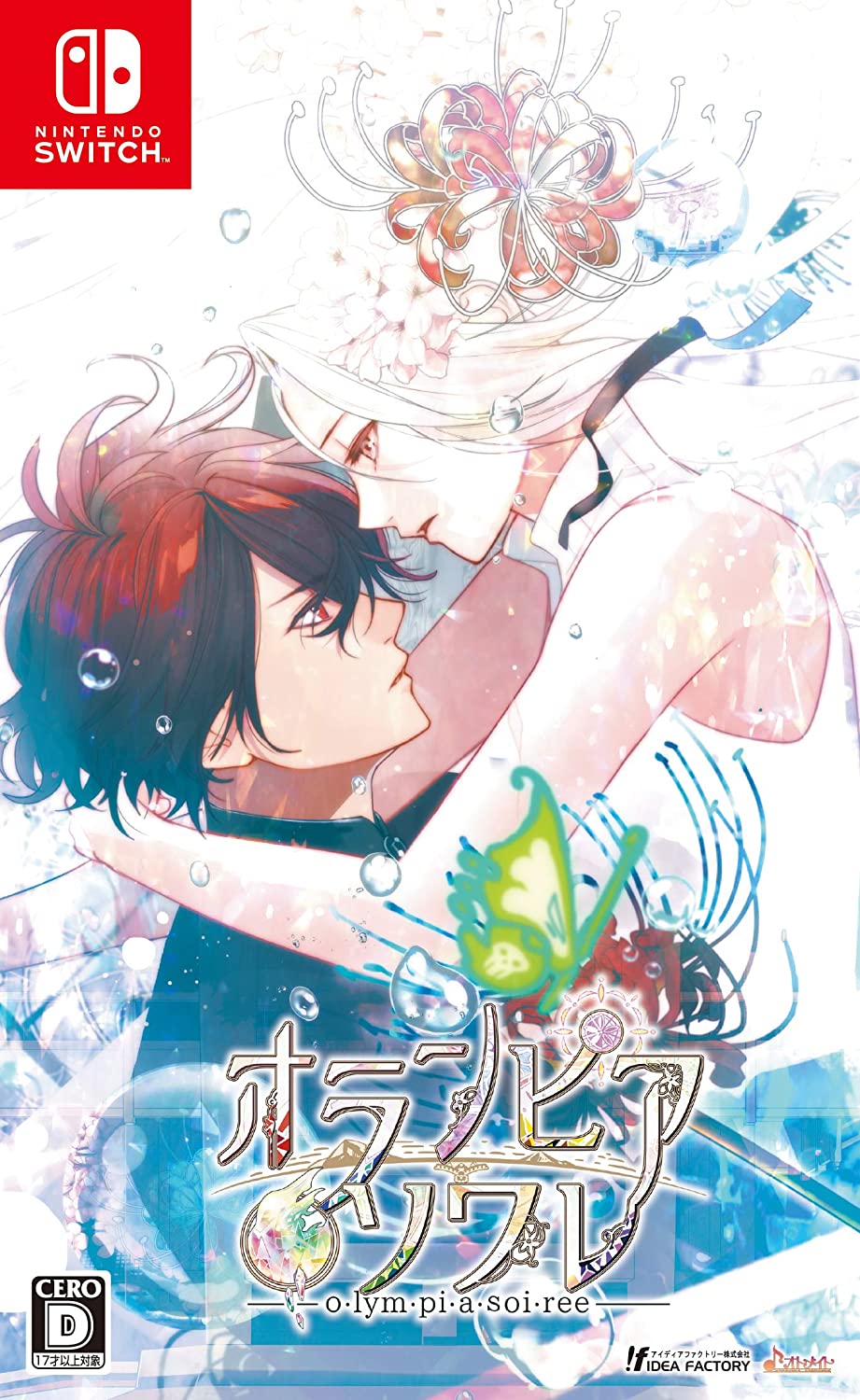 After a few rocky releases featuring tremendous typographical troubles, Aksys Games has once again found their footing with the English release of Olympia Soirée. With exceptionally few typos, Olympia Soirée’s unique facets coalesce into a brilliant, shining experience. The game fulfills its role as a story-driven otome game with flying colors thanks to its pristine presentation, sincere story, and charming cast—including a bright and active heroine. The result is a sensory and narrative treat that builds upon the otome tradition while simultaneously looking toward the future at the kinds of meaningful stories the genre can continue to produce.

Olympia Soirée centers on protagonist Olympia as she seeks out a husband so her bloodline can continue. Olympia is the last remaining “woman of the White,” a group of women who worship the sun goddess Amaterasu to keep the sun in the sky. These women lived by themselves on Tennyo Island until calamity struck many years before the start of the game, leaving Olympia as the sole survivor. She was kept sheltered on the neighboring Tenguu Island until her eighteenth birthday when the island’s government requires her to find a husband for herself.

Although no women of the White live on Tenguu Island besides Olympia, Tenguu instead has a rainbow of “colors” for its inhabitants—their genetically determined hair and eye colors—that form a rigid and harmful caste system. This seems like a simple yet effective setup for a plot revolving around social injustices, but it soon becomes clear there’s more to the worldbuilding than meets the eye.

As Olympia scours Tenguu Island for the man she would consider her soulmate, the implications of living in a world where the sun may disappear without enough prayers from a certain group of women compile with other expanses of island lore based on the Japanese creation myth. As you go along, you discover mysterious objects from “Japan” washed up on the island shoreline, and the mysteries only build from there. Each route of Olympia Soirée fleshes out the complex worldbuilding further, all of which plays a role in an underlying exploration of agency and the fight for meaningful change.

Throughout the story, Olympia learns about the complex systems on Tenguu Island that allow it to maintain its existence but contribute to its bigotry. Despite beginning as a sheltered and unknowledgeable young lady, Olympia grows into a considerate and dedicated woman who insists on using her agency to effect positive change. Alongside her newfound friends and suitors, Olympia puts in the effort to enact societal and legal change that is realistic in scope but still purposeful, starting with setting up a delivery service between the color class districts. This kind of narrative carries with it a timeless relevancy while also riding the wave of recent increases in distinct otome protagonists with agency and courage. Olympia is a shining example of an otome protagonist who can act as a self-insert while still being her own person just as the otome player is.

Olympia isn’t the only character to love in the game, however. The primary cast of love interests comprises men from across the color class system who each have their desired means of enacting change together with Olympia. After completing the “shared” chapters that focus on Olympia setting out across Tenguu Island for the first time, you can choose to embark on the route for either Kuroba of the Black, Tokisada of the Green, Yosuga of the Purple, or Riku of the Blue.

After completing these four routes, each building on the player’s understanding of the game’s complex lore, Himuka the undertaker’s route can be chosen, which is even more lore-heavy than the rest. The final love interest to unlock is Akaza of the Red. Although his route acts as a “true” cumulative route of sorts that is appropriately kept for last, each character’s story includes worldbuilding not revealed in any other. Each character has a clear part to play in the overall narrative, and no one route, even Akaza’s, feels like it inherently eclipses another because of the vast lore spread between them.

Because of the underlying focus on breaking away from the harmful traditions set by its rich yet ancient mythology, Olympia Soirée does approach some potentially triggering subject matter, including not only the expected pseudo-racial discrimination and sexism but topics of emotional abuse and assault, too. Still, they’re not thrown around carelessly; instead, they serve to instill just how dark discrimination can get and why it’s important to fight for change. Because Olympia Soirée is willing to tackle these necessary topics—and does so with the seriousness they require—rather than shy away from them as if they don’t exist, the story and characters have room to be impactful in constructive ways. There are delightful characters as well as contemptible ones: ones who will make you root for their success and hope for their safety, and others who will make you scowl in disgust. Each plot point is relevant and builds a complete and compelling story with a cast of both positive role models and memorable yet rightfully hated antagonists.

These pieces of the story experience are glued together with all the typical facets of an otome game. The first thing that is abundantly clear is that Olympia Soirée takes the “visual” in “visual novel” very seriously. The primary and secondary cast designs are gorgeous, with Japanese-inspired attire adorned with no shortage of delicate details and pleasing patterns. They all have a notable number of “sprites” to clearly communicate a diverse range of body language while also incorporating a wide variety of facial expressions. These expressive faces are also fully animated with smooth blinking and even lip-syncing. Even the protagonist has a seemingly endless supply of portraits to accompany her dialogue, thoughts, and narration, emphasizing her role as an effectual main character.

This only ends up being a drawback with the number of tertiary characters who have no visuals whatsoever. It’s not unusual for minor characters in visual novels to lack portraits altogether, especially when Olympia Soirée includes a large number of them. But when considering the sheer beauty of Olympia Soirée’s visuals and character designs, it’s disappointing that certain characters don’t have their own sprites. It’s easy to love characters such as Atsugi, Fusou, Masuhana, and Chigaya thanks to their recurring roles and meaningful contributions, but just as easy to forget how they’re described, leaving them lost in a sea of otherwise beautiful colors and shapes.

These colors and shapes form the stunning array of backdrops used to bring the setting to life. They are as impressive in number as the protagonist’s varied expressions and as detailed as the cast’s lovingly tailored costumes. Each set piece is adorned with beautiful colors and constructed with a firm grasp of perspective. These backgrounds, combined with some clever use of occasional animation, such as pouring rain, help emphasize the “character” of each scene.

Scenes become steeped in heightened emotion due to musical accompaniment that further enhances those scenes in the overall story. Although most higher-end otome games have befitting and oftentimes even strong soundtracks, only a handful of songs or less leave an impact that extends beyond the scope of the game. Olympia Soirée, on the other hand, has a soundtrack that is entirely a delight. For instance, while Olympia finds herself excited to visit Yomi to pick up letters for delivery, I’m excited to hear the upbeat and slightly mischievous tune that’s equally essential to defining the location as the diverse and eccentric residents. The tracks are infused with a Japanese flair perfectly befitting the setting, working in comfy cohesion with the backgrounds, character designs, and overall lore.

All the pieces of Olympia Soirée work together seamlessly like the colors of a rainbow naturally drawing together. Just as we all comprise multiple roles, some given to us by family or tradition and others that we seek out ourselves, Olympia Soirée takes its roles of comfortingly traditional and refreshingly modern otome with pride and executes them with great skill. The welcome mixture of seeking out a soulmate and working towards societal change bestows great merit on the game’s storytelling as a whole: just like how looking for love in real life doesn’t have to get in the way of your other goals, an emphasis on romance doesn’t have to get in the way of an interesting story. Olympia Soirée is proof positive that an emphasis on romance, or that being “a game for the female audience,” should never by itself be used as a point of contention against a game.

Some minor characters are regrettably lacking visuals, it can be challenging to keep up with the game's lore.

Superlative storytelling from the worldbuilding to the characters, an inspiring and exciting adventure for otome fans.