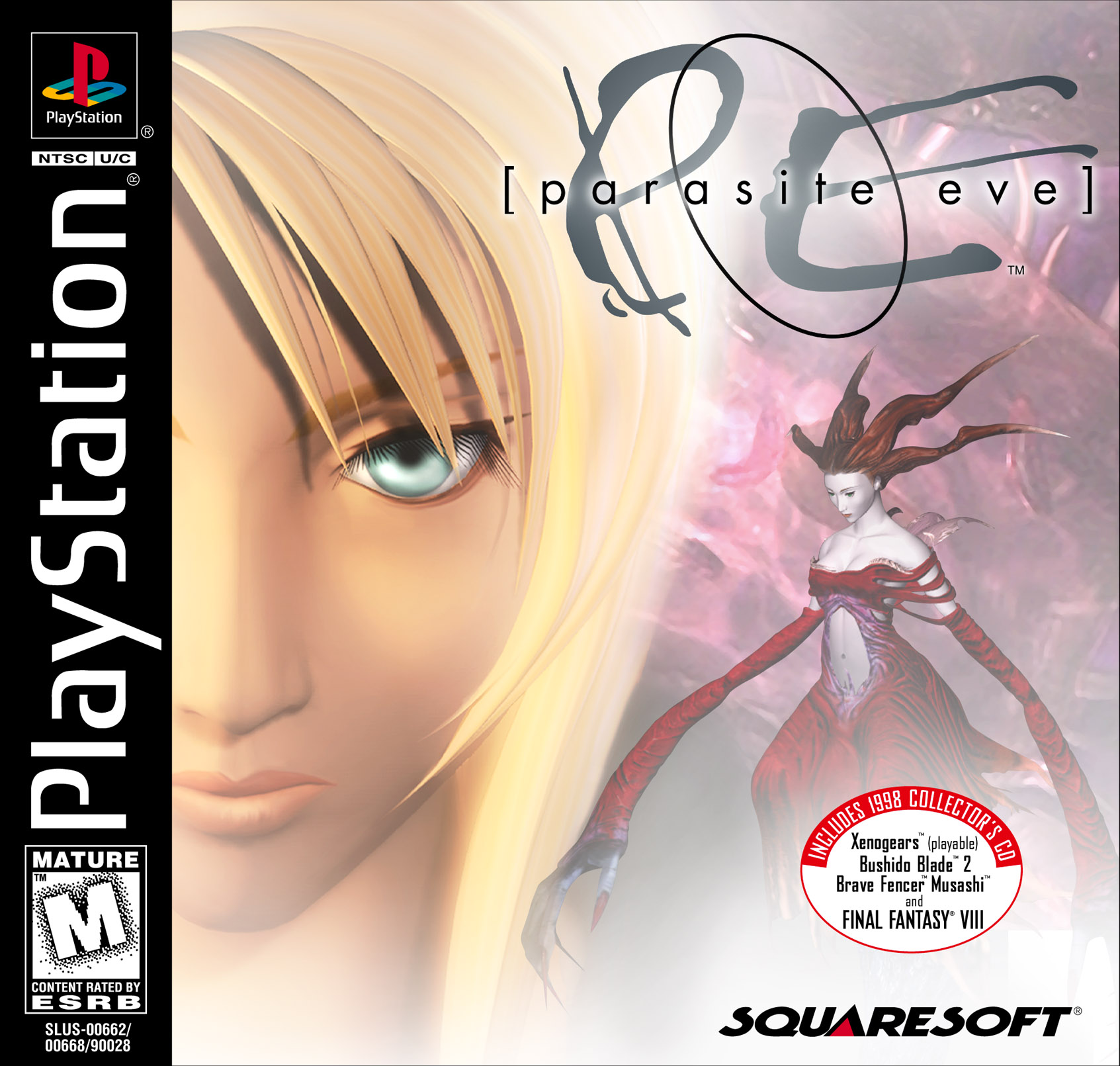 Square’s critics have often accused the popular software developer of emphasizing style at the cost of substance in its post-Chrono Trigger-era games. Projects such as Bahamut Lagoon and Seiken Densetsu 3 looked fantastic but spawned many complaints of serious gameplay flaws from RPG veterans. For the most part, I disagree with Square’s critics (though I’ve never played BL or SD3); games like Final Fantasy VII, while heavy on the style, have generally had enough substance to back up the style. However, in the case of Parasite Eve, I fully agree with the barbs of the critics.

Parasite Eve begins on a Christmas Eve in present-day Manhattan. Aya Brea, a rookie cop, is at an opera at Carnegie Hall. At a pivotal moment during the opera, the lead female character in the production begins to sing a solo. All of a sudden, the other actors on stage burst into flame, followed by many members of the audience. As the singer continues to sing, more and more people ignite. Shoving her wimpy date to safety, Aya draws her gun and runs toward the stage to apprehend the mysterious woman.

As Aya reaches the stage, she confronts the mysterious singer, who introduces herself as Eve. Eve then tells Aya of the power of controlling mitochondria, and how she used it to set everyone aflame earlier. She also hints at Aya’s budding power, as Aya was the only member of the audience immune to the incineration wrought by Eve. A brief battle ensues, ending in Eve’s retreat and Aya giving chase. From that point on, it’s up to Aya (with some occasional help from her partner Daniel and the rest of her police force) to uncover exactly how this catastrophe was created.

Parasite Eve’s biggest strength is in its graphical presentation. Just about all of the gameplay takes place in area maps, and the area maps are beautiful. Realistically proportioned polygon characters are superimposed on detailed prerendered maps. The amount of detail is matched only by Final Fantasy VII, and the backgrounds are perhaps the most realistic that I’ve ever seen. The darker colors that are used extensively here help set the tense and frightful atmosphere of the game, and match up quite well with the actual New York City. The polygonal characters are also for the most part drawn well, and Aya in particular is detailed in her appearance and smoothly and realistically animated with a modicum of feminine charm.

Even more impressive than the area maps are the CG cut scenes. Parasite Eve has arguably the finest cut scenes seen in a US game to date. The animation is fluid and nearly flawless, the level of detail is mind blowing, and some of the monsters are simply huge. In addition, there is just about no graininess in these cut scenes.

The battles take place on the area maps, so there isn’t much to be said about them that hasn’t already been said. The enemies are well drawn and animate smoothly and quickly, but are generally lacking in variety. None of them will blow you away, either. The spell effects are pretty good, but really unspectacular as well, with the exception of the “Liberation” spell.

The graphics do carry some noteworthy flaws. There is a world map, and although you don’t see it often, you do have to use it to move between areas, and it looks terrible. The way it’s drawn makes it look like there’s a total of about 20 buildings in New York City, which is certainly not the case in real life or even in the area maps of this game. In addition, the animation of some of the polygonal characters, such as Daniel’s son Ben and the helicopter pilot who picks Aya up after she leaves the hospital, is absolutely atrocious (if you’ve played the game, you won’t need me to elaborate on these two). Also, Aya is very detailed, but many of the other polygonal characters aren’t, so the same detail disparity between characters and backgrounds that was present in Final Fantasy VII appears sometimes in Parasite Eve as well.

Parasite Eve’s control is quite good. Aya can walk in 8 directions, and a dash button allows her to move more quickly in the area maps as well. She is also responsive to the control pad. This is very important in battles, because you have to manually move Aya around during battles in this game. The dash button doesn’t work in battles, but Aya runs at good pace in the battles on her own. The menus are also well organized.

However, control also has a few problems. There are a lot of places in the game that look like places Aya can go, but in actuality, aren’t. This is very annoying, because you’ll sometimes get stuck on corners that aren’t visible, or you’ll try to go somewhere you just can’t, and waste time backtracking. In addition, Aya walks painfully slow, and the dash button doesn’t make her much faster. I consider myself a patient gamer, but these aspects of control sorely tested me.

The sound in Parasite Eve is one of its strengths. The sound effects in the game contribute to the atmosphere, and the Yoko Shimamura-composed soundtrack is at times bone-chilling. In addition, some of the songs are brilliantly written. There is no voice acting in Parasite Eve (this could be considered good or bad, depending on your opinion of English voice acting in games).

Unfortunately, the sound system for the music is not up to Sony PlayStation standards, and is only a notch better than that of Final Fantasy VII. More importantly, a lot of the tunes, while setting the mood of the game quite well, are very lacking in melody and are almost more ambient than anything else. Some people like this; I don’t. Also, many of the songs (including quite a few of the better ones) are very repetitive.

Parasite Eve’s gameplay is full of innovation and solid ideas. It has a unique battle system where you manually move Aya around to avoid enemies and their attacks. As mentioned before, battles take place on area maps. Turns are generated in real time (a la Final Fantasy VII), and Aya’s attacks are menu-based in principle. Magic points (called “Parasite Energy”) automatically recharge while you fight. All of the battles in this game are preset; there are no random encounters in PE. You can, however, repeatedly return to areas where battles appear to build up experience, if you want.

In addition to finding new weapons, you find tools that allow you to upgrade your current weapons by moving a certain parameter of another weapon (at the cost of the other weapon) over to your current one. This option allows a lot of customization of weapons, and is a great feature I would love to see in some future games.

As innovative as the game play is, it runs into key problems. PE gets very repetitive, as the enemies have little variety in their attack patterns. In addition, the settings don’t change very much, and quickly become monotonous. I know that when a game is set in its entirety in Manhattan, the list of possible settings is inherently limited, but I can’t help but think that more creativity than 2 long sewers and a bunch of dark, convoluted buildings could have been possible. RPG veterans may also find this game to be a bit short (I estimate time of completion to be less than 10 hours for seasoned veterans), though I was so bored with the repetitive gameplay and poor storyline that I was more than ready for this game to end when it did.

Parasite Eve’s storyline is especially disappointing because it is so promising as the game begins. The mysterious sci-fi premise quickly gives way to a boring “chase the main villain” tale, which holds few exciting moments throughout its length. As a biology major, I found the scientific explanations of the events in the game to quite ludicrous, too. Then again, this *is* a video game, and, in Parasite Eve’s defense, suspension of disbelief here isn’t any worse than in most video games.

What is a problem, however, is the character development. Aya and her already small supporting cast are poorly developed in this game, which makes the supporting cast seem even more sparse. The dialogue, while impressively error-free in terms of grammar and spelling, is similarly sparse compared to other RPGs, and reflects little personality. It also flows rather poorly, and the writers’ attempts at injecting personality into the dialogue convey petulance rather than any real emotion in the characters.

Compounding this problem is Aya’s character. Now, don’t get me wrong, because she seems like a nice enough girl, but she definitely also seems to be of below average intelligence, and playing as a dull protagonist gets tediously boring awfully fast. Playing this game even brought back memories of Lucienne’s Quest for the 3DO (for those that don’t know, Lucienne was probably the least intelligent protagonist in any RPG ever). Aya is painfully slow at piecing clues together throughout the game, and she doesn’t seem to have any street smarts at all. For example, when she arrests Dr. Hans Klamp (one of the villains in the game), she points her gun at him and tells him to freeze. He doesn’t listen to her, and advances towards her while ranting about the doom of mankind. Now, instead of shooting him, or even just holding her position, Aya puts her gun down and turns around for no apparent reason as he gets within range to physically attack her (keep in mind that she doesn’t know this guy at all). Only through the sudden appearance of Daniel is she able to avoid bodily harm. With moves like that, I have no idea how she managed to get into police academy, much less out of it.

As a resident of New York City, it behooves me to comment upon Square’s portrayal of my town of residence, and I have to say that they have done a commendable job of it for the most part. Central Park is especially beautiful (and accurate) in Parasite Eve. However, there are a few inaccuracies to report (for all you would-be tourists out there). Because the city gets evacuated near the beginning of the game, the hectic atmosphere of the city (perhaps its most notable characteristic) is absent from the game. Also, the game designers made SoHo (a mostly upscale shopping and arts area) look more like Harlem (an area with prominent low-income housing), and Chinatown looks nothing in the game like it does in real life.

For me, Parasite Eve was a promising game that quickly turned into a bitter disappointment. If graphics are the most important thing to you, the ones in PE may be well worth the price of admission to you. However, if storyline and gameplay are more important to you, I strongly recommend that you try before you buy.