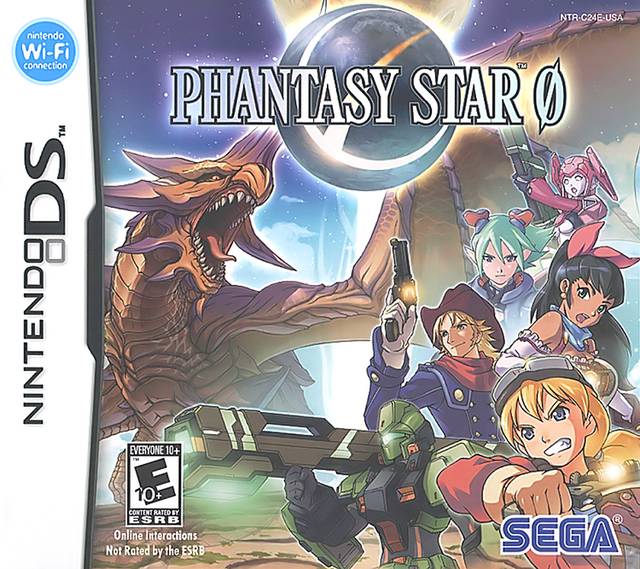 There’s no fault to the basics of Phantasy Star 0’s gameplay, as it, like previous iterations in the series, stays tried-and-true to its roots. Players beat the living hell out of creatures to gain experience points, obtain new items, and earn money. It’s basic and it’s addictive, which is why the series is still running strong in its current iteration. There are a total of 14 different combinations of class, race, and gender; there are hunters, rangers, and forces for class selection and Humans, CASTs and Newmans for race. With the exceptions of CASTs being unable to be forces (magic users) and Newmen unable to be rangers (gun users), players can choose any combination of those classes and races and will gain different attributes based on if they are male or female. It’s a nice selection of classes, although the customization of the characters themselves leaves a lot to be desired. Most different selections for characters’ torsos, heads, etc. only have three or four options, and there are only that many color schemes as well. Still, the game features a wide variety of weapon and technique choices, so it takes quite a little while to feel repetitive, even after killing heaps of the same creatures.

That being said, Phantasy Star 0 doesn’t add a whole lot to the Phantasy Star Online formula. In fact, the DS itself makes the game feel like less than it should be, but thankfully, it has still got a couple of features beyond Phantasy Star Portable. As far as the DS restrictions go: first off, the DS lacks analog controls, which makes moving your characters stuck to the standard 8-way directional pad. This is quite awkward initially, but it’s something that I got used to over time. Those who have not played a previous Phantasy Star title may not be used to the combination attack system. Unlike many action-RPGs, where button mashing is the norm, to execute a combo attack, players must rhythmically tap the button to the animation. Too early or too late, and the attack won’t connect. It’s not as if these are all the same, either, as every weapon has a different timing for its animation. As well, there are stronger attacks that take longer to charge – and these change the timing even further. There are other small gripes as well; there are tiny bits of loading when you begin conversation, as the DS brings up new artwork each time. It’s not horrid, but it’s still something to improve upon.

Unfortunately, the biggest gripe is also due to the restrictions of the DS hardware. Phantasy Star 0 does not have particularly large zones. Players will enter a particular area, clear out all of the monsters, and then choose to move on to the next area. This makes exploration a bit of a bore, as backtracking isn’t as easy as just running through open doorways. It’s unfortunate that these flaws are here, as the title really does bring about what’s most important for players: online play. Unlike Phantasy Star Portable, Phantasy Star 0 allows players to go online with other players. Players can venture into the world with random people or play with friends and collect loot to their heart’s desire. It’s not a particularly feature-filled world, but it functions quite well. One thing that PS0 does improve on is communication. Players can use a Pictochat-like interface to draw messages to their allies online. It’s really spiffy, though it is limited to people on your friends list. There may not be much more to the online play other than the fact that it exists, but it extends the gameplay value quite a bit when you’re able to take down a big boss with your friends rather than with AI partners from the single player campaign.

Said campaign is quite good, actually. There are three separate threads to the story, each of which are played through by choosing a character from each race. The story begins 200 years after an event called “The Great Blank,” a point previous to which there is no recorded history, and no living soul (or CAST) can put a reason to. Players will explore the reasons behind the Great Blank as they become hunters. Hunters, as you might have guessed, take on bounties and missions to earn their keep. There are quite a few twists and turns, and the split between the three stories makes the single player campaign worth multiple playthroughs. All three perspectives share the same base non-player characters, but it’s great to see how everything sorts out for each race. Your characters are the same in both the single player and multiplayer campaigns, so it can be worthwhile playing through more of the single player while your friends are busy.

The story is supplemented by a strong aesthetic as well. Graphically, the game is very impressive for a DS title. By keeping the environments small, Sega was able to make the character models rather detailed, although as mentioned earlier, character customization is rather slim. In the single-player campaign, characters are accompanied by anime-style portraits, all of which are well designed and expressive. While cutscenes are not plentiful in the game, they do show up at points and look good even on the DS’s small screen. These scenes are voice acted as well, which is a nice touch for a handheld title. All of the sound in the game, from basic effects to the voice acting to the music, is good, although it leaves something to be desired as it is quite forgettable.

I can’t say I got addicted to Phantasy Star 0 like I did with other iterations of the series, but I suppose after taking down Dark Falz and Olga Flow a hundred times, there’s not a huge draw for me anymore. As I said in my introduction, this game sticks to the formula and does well taking it into the portable space while keeping things like online play alive. It’s not a game for everyone, but those who are fans of “grindfest” games like Diablo will have a blast with this game, especially considering you can play it while waiting in the line at the DMV. There’s a big difference between the Phantasy Star Universe-styled Portable and the Phantasy Star Online-styled 0 and fans may be partial to one or the other. That being said, however, Phantasy Star 0 is indeed a worthy purchase for just about anyone with a DS and some time to kill.