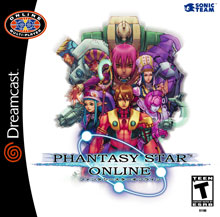 Many gamers looked forward to Phantasy Star Online with enthusiasm; I know I did. The revival of the famed series’ name was enough to get me psyched. However, after playing the game through and then some, I have come to the sad conclusion that all Phantasy Star Online happens to be is a boring Diablo II clone without being enjoyable like the aforementioned PC hit.

Phantasy Star Online’s plot simply serves as a backdrop for the rest of the game, which focuses primarily on gameplay. Basically, a colony ship called the Pioneer 1 was sent to Ragol, a remote planet. Since initial impressions seemed good, the Pioneer 2 was sent out to this new home, but when Pioneer 2 approached Ragol, there was a huge explosion on the planet; all contact with Pioneer 1 and the people there was lost. Now it’s up to you, a member of the Pioneer 2 crew, to find out what’s going on, and to make a pretty penny along the way.

There are no plot twists to speak of; though the game tries to convey some sort of mystery as to what’s going on at the planet’s surface, it’s never capitalized on and merely takes a backseat to the actual gameplay. Though it is an online game, there is an offline mode and the plot still doesn’t cut it; something deeper needed to be present. There are just waves of monsters with increasing difficulty, and finally some bosses. That’s it. It’s sad that such a game bears the great Phantasy Star name by simply borrowing things from the famed universe.

The characters in Phantasy Star Online are player created, so there are many different combinations. Players can be humans, robots, or numans, and from those three they can be rangers (specializing in firearm use), hunters (melee combat), or mages. Though it may sound appetizing, it really isn’t, and this character creation system falls flat on its face. Gamers may be initially impressed by the variety of aesthetic areas they can alter, such as hair styling, color, etc., and with many choices, I can understand that. However, upon closer inspection, there is no editing of IMPORTANT things such as strength, agility, etc. It’s all set, and characters just level up and gain more experience and stats.

You start out with a companion, called a MAG, which is a floating “pets”, in essence. These MAGS can boost your abilities depending on what items you feed it. That’s the extent of the character creation and abilities.

There are generic spells that can be learned and used, and different weapons that may be used by all players or just certain types. The characters themselves have appropriate design for a game of this type. However, the most important part fails miserably; the character creation and management system. In an online action oriented game of this type, something like that is integral, since there is no real character development or personalities.

The soundtrack for Phantasy Star Online is yet another bitter disappointment. The short game is filled with anything but memorable music; it’s like ambient jazz-inspired new age with some MIDI percussion as an accent. Many of the tracks consist of a simple melody played out on a synthesizer with a percussion loop playing with it. The only track of notice would be the theme for the forest, which is a soothing piano piece with some synth instruments accompanying it.

However, every other track is bland and forgettable, including the battle themes. When an enemy is in close enough proximity, the music changes fluidly to the battle theme, and though the transition is nice, the songs are anything but that. Again, it’s not bad music by any means; just not what one would expect from such a famed series; it’s too mediocre.

The most important part of Phantasy Star Online is its gameplay, and even here Sonic Team managed to screw things up. The game is played from a third-person perspective, with a basic action-RPG set up. The gamer wanders through dungeons, slashing at enemies and boxes for items, and then fights a boss. Yes, it’s very repetitious, but games like Diablo II managed to do that while piquing and keep my interest. Phantasy Star Online did not.

First off, the game has FOUR dungeons. Four! That’s it! Not only will any seasoned gamer breeze through them in less than twelve hours, but also the whole point of PSO was the ability to play online, for near infinite replay value. How is this supposed to be accomplished with such a small number of areas to visit? The areas get tired and boring, and though they are sometimes switched around, the dungeons always use the same basic places to visit, just sometimes behind a different door. All the gamer ends up doing is running through the same dungeon they’ve been through fifteen times before, slashing the same exact enemies, that spawn in the same places, and slashing boxes to get items.

The offline game is near unbearable, as this repetitious task becomes too mundane for any sort of enjoyment; the online factor saves face somewhat because of the interactivity with other people and the enjoyment of playing with friends. The attacks are basically the same for everyone; the basic physical attack can be executed in a three-string combo if the button is pressed consecutively. That’s even more variety for you! Phantasy Star Online fails because of its lack of variety in a game that should theoretically never end and have near infinite replay value.

Phantasy Star Online boasts some very pretty polygons. The entire game is constructed of beautiful, detailed polygons. Though none of the game is as good looking as Grandia II or Skies of Arcadia, which is understandable for a game meant to be played online and with constant action on screen. The character animations are smooth, and though there is some degree of pop-up, it really doesn’t take away from the game’s beauty. The only problem is the repetitious textures and re-used enemies that appear much too often; but nonetheless they are still detailed well and animate equally as well. Though the aliasing can become annoying, many people will be used to it and won’t mind.

Phantasy Star Online boasts a revolutionary communication system; basically, gamers can play online with people from France, Germany, or Japan, and PSO will translate their text into the desired language. Though coarse, it’s a great idea, and though not the first online game to implement such a feature (Ultima Online) it works much better. There is very little text in Phantasy Star Online other than the text generated by fellow gamers, but what’s there is fine and I didn’t notice any serious issues with the English language.

Phantasy Star Online even has some control issues. Though it’s not terrible to control, when in close proximity to an enemy, your character slows to a walk, and cannot run. I assume this was implemented for difficulty issues, but it is stupid in my opinion, and other techniques could have been implemented better. A Z-targeting system like the one in Zelda 64 would have been appreciated as well, though the lock-on system isn’t bad, it’s not as simple and quick to use as the aforementioned Zelda method, and a game of this type would have only benefited from its use.

Overall, Phantasy Star Online was a disappointment. Gamers who did not get a chance to check games like Diablo II out won’t be as disappointed, but it was too hard for me to see past the repetitious gameplay and such poor variety. The game is terribly short for an online game and suffers from too few areas to visit. Maybe Version 2 will fix all this, who knows. But as it stands, Phantasy Star Online combines the power of mediocrity and melds it to the powerful Phantasy Star name. What you get is a game not worthy of the title it bears.