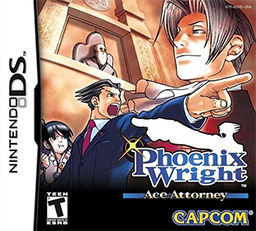 The concepts behind some games make obvious sense. If someone asked you if you would like to play a game where you beat the stuffing out of demons with a club, you’d probably say, “Of course! That sounds fun!” (After all, you do like RPGs.) If they said, “How about a game where you’re a ninja?,” you might say “Why are you still talking? It’s ninja time!” On the other hand, your reaction might be a little more subdued if someone asked if you’d like to play a game where you’re a defense attorney in a Japanese court. Trying to keep innocent people out of jail is certainly noble, and it’s got promise, but it’s not the most likely scenario for a video game. Even so, that’s the basis of the Phoenix Wright series, and it has had a lot of success over the years. Its developers have now decided that iPhone OS players need the chance to become fans, so they have ported Phoenix Wright: Ace Attorney to the system. I’ve never played the series, so I was eager to find out how it fared. After playing this version, I’m not sure that porting it was a good idea.

This version of Phoenix Wright includes the five cases from the DS version, which may at first glance seem like a small amount of gameplay. However, those five cases take quite a while to complete, so you will definitely get your money’s worth. The individual cases are cleverly written, and they tie into an overarching mystery that I liked as well. The characters involved are distinctive and funny, although I sometimes felt that there were personality nuances I just wasn’t able to follow. Of course, with as many times as the dialogue made me chuckle, following those nuances probably just would have made things funnier. The story’s only real flaw is in its pacing: there were times when I saw the right thing to do or the right question to ask literally hours before I was allowed to do so. (To set aside formality for a minute, I also hated that darned Manfred von Karma sooo much! Argh. Of course, I was supposed to hate him, but I think they did the job a little too well.)

To solve these five cases, you’ll need to search locations related to a crime for clues, talk to NPCs in the field, and cross-examine witnesses in court. Throughout, the differences between how the US and Japanese legal systems work are glaringly clear, and they sometimes frustrated me. I especially disliked the fact that as the defense attorney, I wasn’t entitled to any evidence beforehand. If I wanted advance information, I had to rely on people telling me things they really weren’t supposed to. I don’t know if that is a realistic portrayal of Japanese justice or if it is simply a way to pad the game’s length, but it felt like padding.

Cross-examining witnesses is a very important part of Phoenix Wright, and one of its two elements carries the game’s only actual danger of failure. You can (and should) “press” the witness for more information about every statement they make, even those that seem uncomplicated and/or obviously truthful. There’s no penalty for doing this unnecessarily, and pressing reveals extra information you need in order to proceed with the case. In addition, you can present evidence at any point in your cross-examination, and this is where the possibility of failure comes in. Presenting evidence is always interpreted as an attempt to contradict the specific line of testimony being displayed when you do so, and if you choose the wrong piece of evidence or the wrong line of testimony, the judge decides that your evidence does not contradict the witness and overrules your “objection.” You lose the case if you get overruled too many times, so make sure you save before you start throwing wild guesses. And this is an adventure game, so I think we can all admit that there will be at least one point when you’ll just have to guess.

Phoenix Wright’s nature as a DS port is most evident in its graphics. The screen is divided into two halves, with the action and dialogue on the top half and your input options on the bottom. Backgrounds are static, as are most character portraits, although they’re are sometimes lightly animated. Fortunately, these static images have tons of style, and the character designs match their personalities well. On the down side, there’s no voice acting, tons of dialogue, no text speed option, and the text speed presented is fairly slow. If you’re the kind of gamer who turns the text speed all the way up, this will both drive you up a wall and add unwanted hours to the game’s length.

In the areas I’ve discussed thus far, I’ve had both gripes and kudos for this version of Phoenix Wright, but that changes now that I’ve reached the sound department. I really don’t have anything good to say here. Whenever text appears, the game makes a fairly standard RPG beep with every letter, and that beeping is extremely annoying. The music is okay, but not really great. Sadly, even if you like it, the only sound option you have is to turn the volume up and down, affecting both the text beeps and the music. And given my dislike of the beeping, my lack of love for the music, and the game’s overly slow pace, I loathed the fact that Phoenix Wright doesn’t allow you to listen to your own music while you play. I very frequently felt that as long as I was playing this game, it was holding my iPod hostage.

Likewise, I don’t have anything positive to say about the game’s controls. They seem overly complicated, as though the DS had shoehorned touchscreen alternatives to all of the button-presses, and the iPod Touch version simply dropped the button support without changing anything about the way their awkward touchscreen alternatives worked. The reviews I’ve seen of the DS version seem to tell me that’s not how it was, but that’s definitely how it feels. There’s space on the screen to hold quite a few buttons, but instead, you are forced to press one of just three buttons and then slide your finger to another button that pops out from underneath the first button you pressed. Moving from location to location is also frustrating because you can only move to specific places from each location. I realize that in real life, this is the way it works – I can’t move from my basement to the driveway without moving through the front room – but in a game, having to stop in the front room every time I want to go outside needlessly slows things down.

As I said, I was excited to try Phoenix Wright. I actually chose to review it before The Secret of Monkey Island, which I loved back on the PC. Sadly, I think this review makes it painfully obvious just how disappointed I was with the results of my choice. The story and writing are worth experiencing, but they are outweighed by unpleasant elements at almost every turn. To make matters worse, the game uses up your iPhone/iPod’s battery far more quickly than it should given its extremely undemanding graphics, animation, and sound. If you can find this game on another platform for a price even relatively close to the $5 that it currently costs on iTunes, I’d recommend it. A series doesn’t become as beloved as Phoenix Wright is by turning out games as mediocre as this iPhone OS port.