Even though they were great at the time it’s difficult to recommend them in 2011. 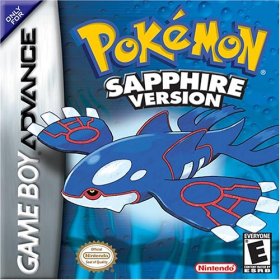 Ruby and Sapphire continue the long tradition of Pokémon games being released in pairs. Just like Gold and Silver, and Red and Blue before them, Nintendo somehow convinces us to purchase two games that are pretty much identical. One of the greatest mysteries of the universe is the strange desire many of us have to “catch ’em all” and Ruby and Sapphire do not disappoint. They improve upon the earlier games in a number of ways and should still be enjoyable for big Pokémon fans. Well, unless you already have Emerald Version.

As with previous iterations, Ruby and Sapphire have you take control of a young child with the destiny of one day being the Pokémon Champion. In a slight, but much appreciated, addition this time around you can choose to play as either a boy or a girl. There are no real differences between genders, but an optional female lead adds variety. After coming to the rescue of Pokémon Professor Birch from a wild Zigzagoon, the hero is given a choice of one of three starting Pokémon to nurture and with which to begin adventuring. The stories of Ruby and Sapphire have you facing off against the infamous Team Magma and Team Aqua respectively. Few other differences remain between the two plots, leaving little incentive to invest time into both games. As you might expect, the only other changes between the two versions are slight variations in Pokémon you can catch.

When compared to Pokémon Crystal, however, Ruby and Sapphire bring a lot to the table. The same goal of battling all eight gym leaders across the region and ultimately defeating the Elite 4 remains the same, but there are some excellent additions to the gameplay that make the world far more interesting. The same battle system from Crystal returns, but with slightly faster pacing and shiny new Pokémon graphics. You can keep up to six Pokémon with you at a time, but battle is typically a one-on-one affair. Each Pokémon has four different attacks to choose from and one ‘type’ such as fire, water, rock, or psychic. Some types are strong or weak against others in a rock-paper-scissors style of gameplay. This tried-and-true game design works well and leaves plenty of room for strategy on your team of six. Defeating opponents gives your Pokémon experience and, as they level up, they become stronger, learn moves, and evolve into new forms. This time around you’ll even have the chance to participate in double battles. Instead of just one-on-one you can battle with two Pokémon at a time. These sorts of fights aren’t especially frequent, but they’re a nice change of pace when they do appear.

Battles tend to come in one of two ways. The first is when you encounter a wild Pokémon by walking through tall grass, surfing across water, or catching them with a fishing rod. These Pokémon are generally weaker and give less experience than trained ones, but they can be caught. By sufficiently weakening one and then throwing a Poké Ball you can try to catch it and add it to your team, or simply keep it for collection purposes. Some new Poké Balls are available to make capturing certain Pokémon easier, too, such as the Dive Ball for catching Pokémon underwater. Over two-hundred-and-fifty Pokémon are available this time around, one-hundred of which are brand new to Ruby and Sapphire. The second mechanic of battling Pokémon involves engaging fellow trainers you meet as you travel around the region. This is the primary way of making your own Pokémon stronger and earning money to spend on various helpful items such as potions or evolutionary stones.

Outside of battles there are plenty of other tasks to tackle. Growing around the Hoenn region, for example, are berry plants. Most berries have special qualities such as being able to cure negative status conditions, boost Pokémon abilities, or even restore some health. You can then replant seeds to grow new berry trees and keep your supplies full. By teaching a flying Pokémon the Hidden Machine move Fly you can easily travel around the region to places you’ve been to before and water the berry trees you’ve planted. Along with other returning Hidden Machines such as Cut and Strength, there are a number of new additions, the most interesting of these being Dive. Dive allows you to swim with your Pokémon in deep water and find new locations. There is plenty to find and explore in the vast world, including many optional routes, hidden items, and legendary Pokémon. Apart from exploration you can take part in beauty contests to win prizes and earn special ribbons for your Pokémon. If you rush through to the end it will take roughly twenty hours. You can easily surpass one-hundred hours if you want to take on all of what the game has to offer.

Graphically, the game was fantastic when it was released. The quality of the sprites and the rich colours brought the world of Pokémon to life like never before. They still stand up fairly well to more recent releases, but they pale in comparison to the sprites used in HeartGold, SoulSilver, Black, and White. The environmental graphics show their age and most of the buildings in cities are boring rectangles, and the animation is clunky at best when compared to newer versions. The same can be said for the sound. The new music tracks and remixes of old ones are a huge step up from the Game Boy Color games, but they’re difficult to praise when compared to the more recent titles. The sound effects are dull, which includes Pokémon noises.

Pokémon Ruby and Sapphire are good games and decent entries in the series. Unfortunately, they’re missing some of the spark and excitement of the earlier titles and the refinement seen in later ones. This puts them in an awkward spot where even though they were great at the time, it’s difficult to recommend them in 2011. If you’ve completely missed the adventure in Hoenn, then Pokémon Emerald is definitely the version to get. If you’re looking to fill out your collection then there is enjoyment to be had from these two, even though they’re dated. Knowing Nintendo, we’ll see a remake of these two soon enough so holding out for those might be the better option.

Starting to show their age, missing the x-factor of other titles.

Ruby and Sapphire were fun when they were first released, but there's no real reason to go back to them now.