Psychedelica of the Black Butterfly
Review by Patrick Gann · June 2, 2019

Though I was not truly satisfied with any one ending, there are plenty of endings to explore, some more redemptive than others. 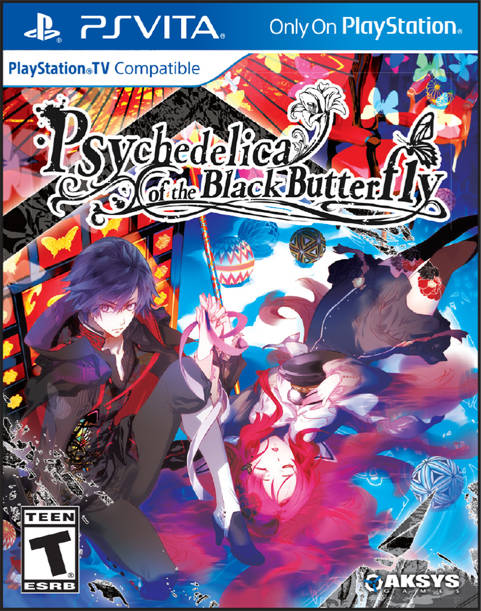 Between this world and the next, another has come into existence. Its formation is unnatural; it is a work of mankind, and it bears the name “Psychedelica.” Who is dead, and who is alive? Can one’s fate be changed? These questions, and more, are explored in Psychedelica of the Black Butterfly.

Idea Factory (and their “Otomate” studio for otome visual novels) developed a pair of titles that rely on this Psychedelica as a setting all its own. The first of these two games is Psychedelica of the Black Butterfly, which puts the player in control of a young lady who awakens in a fantastical manor, memories lost. The amnesiac protagonist meets a handful of young men also claiming memory loss. In their possession are mobile phones with limited functionality, a unique charm/accessory that seems to absorb dark energy, and the power to manifest fancy handguns when in danger.

Okay, so the setting is a mix of asinine (amnesia) and bizarre (everything else). But what makes Psychedelica BB so appealing from the start is the beautiful, neo-Gothic art style. The music, by Sting composer Shigeki Hayashi, also sets the stage well. Every major aspect of the art design seems to work with all the other parts of the game: the masks, the butterflies, the architecture of the manor’s interior, the clothing, the accessories … it all works. Visually, this is a cohesive experience.

Another feature that pulls things together is the Flowchart, which fills in as you clear scenes, opening more boxes along the way. If you have cleared all dialogue options in a scene, a small icon appears in the top-left corner of the box for that scene, so you know the areas you’ve “completed” and those that hold further secrets. In addition, the game sports a total of 39 “Short Episodes” that are detached from the main flowchart. These extra scenes give glimpses into the memories of the protagonist (who receives the moniker “Beniyuri” within the manor) and the male cast (Hikage, Kagari, Karasuba, Yamato, Monshiro) once certain prerequisites are met. Very, very nice.

Unfortunately, all of the structure is wasted on a plot that is ultimately unsatisfying, with dialogue that moves between cliché and — for lack of a better word — abusive. Regarding the clichéd amnesia plot, you can already guess what the game offers to you as objectives: 1) get memories back; 2) escape from manor. It takes until the third chapter of the game (which runs to seven chapters) to fully establish those tasks in the writing, but any experienced gamer can guess this within 10 minutes.

My chief complaint with the game, which I do not mean as a political critique, is that some of the young men with whom Beniyuri must cohabitate get sexually aggressive with their words, and sometimes, their actions. On its own, this could be a useful part of the story, but my real problem is that in a VN the protagonist should be afforded choice during key sections of the game. For example, when Karasuba pushes Beniyuri into a wall and whispers some suggestive ideas — even initiating what he believes is foreplay — the player is not given any options, instead being “treated” to an internal monologue about how uncomfortable Beniyuri is. The male character eventually backs off, but without Beniyuri truly standing up for herself. So not only do we get zero portrayal of an empowered woman, we do not have the option to be the empowered woman. The whole experience of an otome title is particularly unique when played by someone who identifies as a man. But whether the player is a man or a woman, I think we can agree that in moments like these, this kind of writing in a game designed to have key interactive points has failed.

If that’s the most I had to say about the story, let me assure you that the numerical score given would have been somewhere between 20% and 30%, but there are redeeming features. Though I was not truly satisfied with any one ending, there are plenty to explore, some more redemptive than others. In a game with a mood and tone like Psychedelica, know that there is no such thing as a perfectly happy ending. Even the best endings leave something to be desired, but perhaps that’s a necessary aspect of storytelling in games like these.

Furthermore — and I should offer this as a disclaimer to you, dear reader — I did my best to stay impartial while evaluating the game’s localization. Former RPGFan staffer Stephen Meyerink, the very person I entrusted RPGFan Music to many years ago, served as localization editor on this title. I’ve played my fair share of VNs in my life, and Psychedelica is simply packed with text. Meyerink and the other staff at Aksys Games did an excellent job at conveying the game’s abstract concepts in English, as well as maintaining internal consistency with the many strange terms that appear exclusively in this title.

One last thing that differentiates Psychedelica from other VNs is its minigame: a frantic butterfly shooter! While the game prefaces each of these encounters by stating that a large monster is heading your way, Beniyuri ultimately faces off against a host of black and variegated butterflies. The whole challenge and fun behind the minigame is the scoring system: target the butterflies with a mouseover (PC) or touch screen (Vita), but don’t fire your gun until you’ve chained as many as you want. As the butterflies move towards you they will eventually disappear, and a miss is worse than an early fire in the scoring system. Ultimately, you can skip these battles entirely and it will not affect the plot. That said, the points you earn are redeemed in the Flowchart’s “Short Episode” blocks, some of which are necessary to unlock the chart’s alternate paths. Having played the game on my PlayStation Vita, I found the touch screen targeting a little wonky, though that could have to do with the age and wear of my device. The Vita also allows targeting with the analog stick as an alternative, but this is an even worse experience; it’s clear the mini-game was designed with touch screen in mind, and I applaud the developers for trying something different.

Looking back on the experience and comparing it to other VNs I’ve played, especially other Otomes I’ve played, there are better games out there. But, for games with this kind of style and setting, I’ve seen precious few that have been officially localized. If you like that neo-Gothic, dark Victorian setting, contrasting grays and sepia with rich, saturated color, you will likely adore this “psychedelic” game. But given the choice, I would recommend checking out “Ashen Hawk” before “Black Butterfly,” as the other title doesn’t rely on amnesia to weave a tale.

A former RPGFan editor, Stephen Meyerink, worked on this game. This relationship in no way influenced the reviewer’s opinion of this game or its final score.

The character and environmental artwork are beautiful and memorable; the flowchart makes diverging paths much easier to discover and explore.

Weak story involving a bunch of amnesiac teens; disturbing character interactions wherein female protagonist is not given a choice to reject creepy advances from creepy guys.

It's a visual novel from an established Japanese studio, complete with a shooting minigame.