Radiant Historia: Perfect Chronology is a remake that irons out many of the original's wrinkles but also introduces new blemishes that dampen its remarkability. 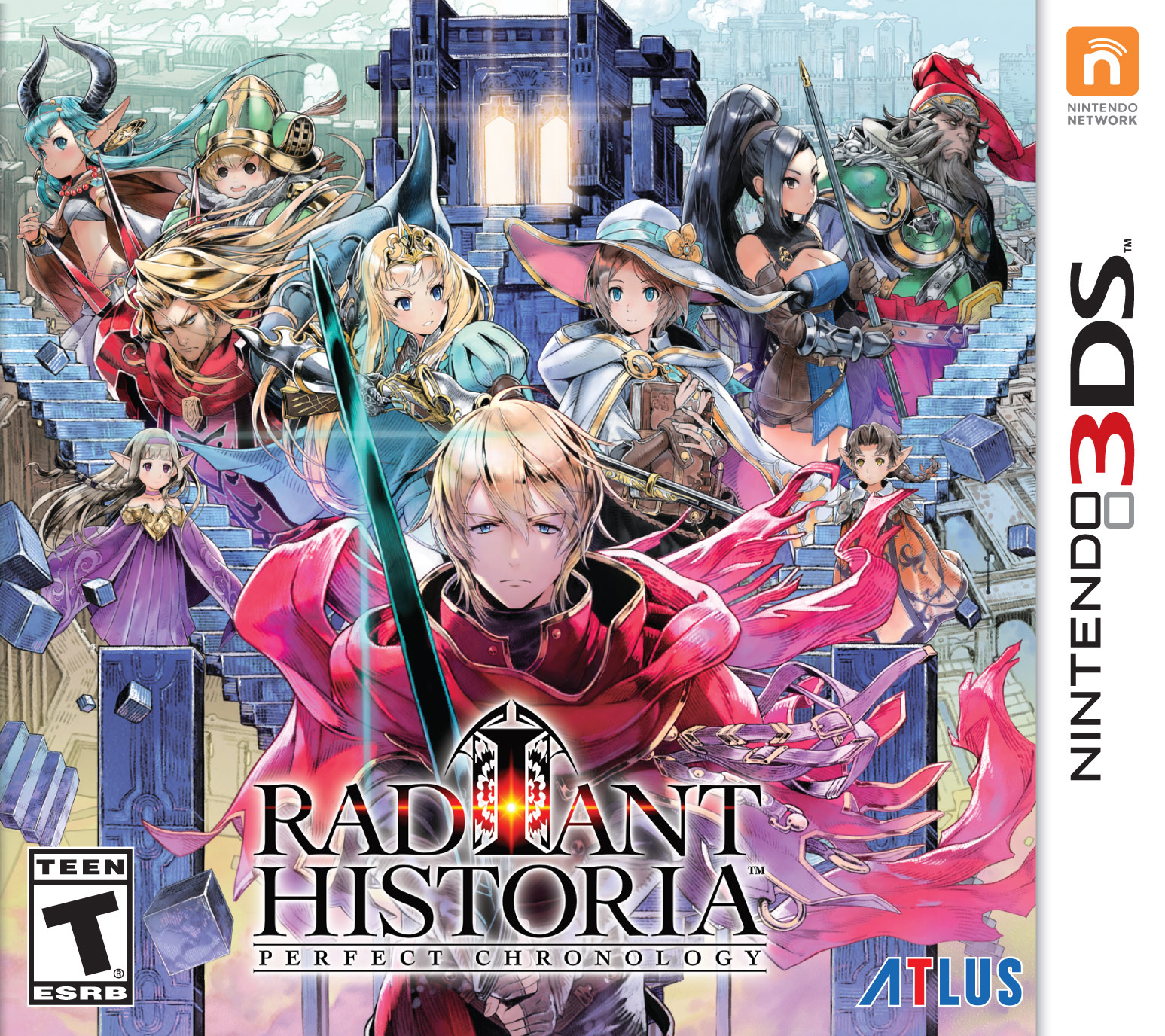 Several years ago, I bought Radiant Historia thinking it was somehow connected to Radiata Stories. I mean Radiant… Radiata… it’s an honest mistake, right? Then again, this mistake led me to discover one of the most underrated gems in the DS library. Not only were its time traveling mechanics scintillating, but almost every other facet of the game was exceptionally executed. So when Atlus announced they would be remaking it with a brand new scenario, I was skeptical but also curious to see how it would affect the original story, if at all. But the question remains: is it worth traveling in time again? Ultimately, yes but with a caveat. Radiant Historia: Perfect Chronology is a remake that irons out many of the original’s wrinkles but also introduces new blemishes that dampen its remarkability.

For those of you who are newcomers, Radiant Historia follows a young man named Stocke, a skilled Special Intelligence agent who unexpectedly finds himself tasked with saving the world. With the continent gradually transforming into a desert wasteland, two of its nations find themselves on the verge of war for control over the few arable lands remaining. In order to restore peace among the chaos and prevent the world from being completely desertified, Stocke utilizes the power of the White Chronicle — a mysterious tome that bestows time traveling powers to its wielder. Traveling between two alternate realities, Stocke must rectify the past in both timelines to pave the way for a more promising future.

Perhaps the most anticipated change in Radiant Historia: Perfect Chronology is the inclusion of an exclusive sub history, aptly named Possible History. Possible History is not a conventional timeline but an outlying dimension containing a multitude of parallel worlds that explore different possibilities and outcomes. The primary objective in this timeline is to gather these strange relics referred to as artifacts for Nemesia, an easygoing historian who is conducting research on the ancient empire that once ruled over the land. The artifacts play an instrumental role in unlocking a supplemental chapter not found in the original version.

Even though it cohesively resolves many of the loose plot threads in the original narrative, the new content is fairly mediocre. Possible History is nothing more than a large side quest comprised of 27 smaller ones — or what I like to call “sub side quests.” Many of them are monotonous fetch quests with a few mini-boss battles sprinkled in between to provide some variety. Apart from the Prophet Noah sub arc, many of the alternate worlds were unnecessary fillers that simply prolonged the main storyline (as if it wasn’t long enough already). Nevertheless, I still managed to complete them all, believing that the additional chapter would be satisfyingly rewarding.

Boy, was I wrong.

One of the things that made the original truly memorable was its ambiguous yet hopeful conclusion. Not only did it fit the plot’s murky overtones, but it also artistically embodied the unpredictable nature of the future and life in general. Regrettably, this extra chapter replaces this emotionally impactful ending with something forgettable. It wraps things up too neatly and includes villain redemption sequences that feel rushed and underdeveloped. Moments after watching its final scenes unfold, I revisited the original ending and claimed that this was my canon resolution.

But beyond my ending woes, Perfect Chronology also has some redeeming qualities that elevate certain aspects of the story. Firstly, Nemesia’s characterization is a refreshing contrast against Radiant Historia’s somber cast. She also extends the lore of the game by providing historical tidbits after completing specific quests, making the world feel more developed — something that I thought was lacking in the original. Perfect Chronology also has additional side quests that deepen the characterization of several supporting characters, making them more multidimensional and integral to the plot.

Incidentally, this remake offers two ways to experience its time traveling tale: Append mode and Perfect mode. Append mode plays the original storyline first with the new content only being accessible in NewGame+, whereas Perfect mode seamlessly integrates it into the main narrative. In this regard, Perfect mode is the perfect option — maybe that’s why they named it as such — especially when time is of the essence (puns intended).

Puns aside, the core gameplay largely remains unchanged aside from some significant improvements to make the battles seem less tedious. To make party members on standby more useful, Perfect Chronology has a new system called support skills. Support skills are triggered randomly during combat and can only be activated if a character has learned that specific skill. Most are acquired through leveling but some are only obtainable through tomes earned by completing certain criteria. Initially I thought their random nature would make them unreliable, but there was more than one instance where a support skill saved me from being annihilated. I’m talking about you, Marco and your wonderful AI implementation.

Another helpful mechanic introduced in Perfect Chronology is the Friendly difficulty setting. In Friendly mode, you have the ability to instantly kill enemies directly from the field map with a small swing of Stocke’s sword — a definite time saver (pun also intended). You still receive the experience points, the money, and items you would have obtained from a regular battle. But be warned. This setting cannot be changed once the story begins so you must decide whether you want a casual or engaging combat experience.

Radiant Historia: Perfect Chronology also contains a fixed-structure mini-dungeon called the Vault of Time. This isolated space serves as the ideal training ground for your party since formidable foes are scattered throughout its monochromatic corridors. Defeating them lets you accrue Mementos, an exclusive currency for this site which can be exchanged for items, stronger equipment, and rare support skill books. At first the Vault of Time is a place shrouded in mystery, but as you progress further into the story, its purpose becomes more apparent — and boy is it heartbreaking.

Speaking of heartbreaking, I was utterly dismayed when I discovered that Atlus decided to “moe-ify” Hiroshi Konishi’s original character designs. The chiaroscuro in his character portraits were positively mystifying and suited Radiant Historia’s cloak-and-dagger atmosphere. By contrast, Masaki Hirooka’s anime renditions are simply a way of providing pure fanservice. To further extend into the realm of fanservice, Atlus also replaced the original’s simple opening with a fully animated one by A-1 Pictures. While visually stunning, it has certain parts that are a bit unsettling — you’ll understand why once you’ve played the game. On a brighter note, there is new CG art shown during specific events of the game. Each of them is vibrant and expressive, beautifully manifesting the complex emotions associated with that particular scene. Furthermore, the UI and overworld graphics in Perfect Chronology appear more polished and fully utilize the 3DS’ higher resolution capabilities.

Yoko Shimomura’s sublime soundtrack returns in Perfect Chronology with new BGMs specifically composed for the new subplot. Shimomura’s emphasis on tying the music to the location and spirit of the situation is also evident in these new tracks. The tune associated with the Dunamis in particular evokes a strong sense of wanderlust, befitting of a ship that lets you travel across time and space. Barring the opening theme with its uncharacteristically upbeat melody, the additional songs are as equally impressive as her original compositions. What isn’t impressive is the voice acting in the game. Most of the actors’ performances are emotionally lacking and inadvertently make the characters feel flat — this is one instance where silence is golden.

Time is such a fascinating concept. Ever since its conception, it has been a fundamental aspect of our lives. But because of this, we also experience its crippling effects. How often are we shackled by the past? How often do we fear the uncertainty of the future? Maybe that’s even why Atlus opted for a more definite ending. Despite my seemingly endless list of complaints, Radiant Historia: Perfect Chronology is a better manifestation than the original of humanity’s ultimate wish — a wish for more time.

Even with its flaws, Radiant Historia: Perfect Chronology is a great addition to any RPG fan's 3DS library.