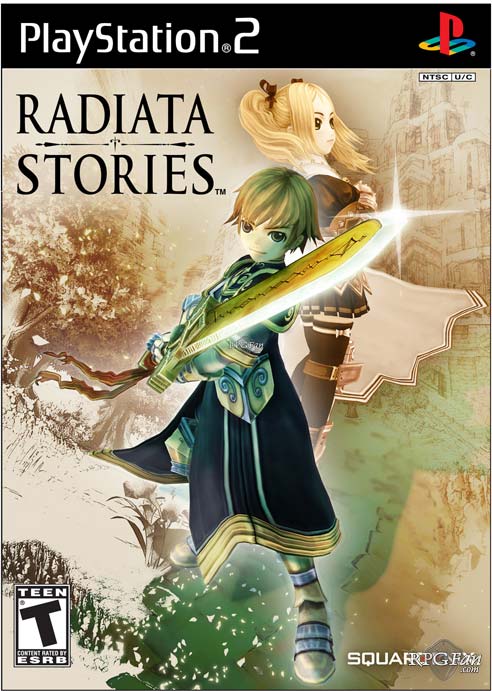 tri-Ace is a well-known developer for the hardcore RPGFan. Having created the Star Ocean series as well as the vaunted PSOne classic Valkyrie Profile, tri-Ace has established a dynasty with their titles. Radiata Stories is coming straight on the heels of RPGFan’s 2004 Game of the Year, Star Ocean: Till the End of Time, and has some pretty big shoes to fill. Unfortunately (or maybe fortunately for some of you,) aside from having an action-based battle system, Radiata Stories shares little resemblance to Star Ocean 3. In short, Radiata is an entertaining, stylish, humorous, yet flawed title.

One thing is for certain, however: Radiata has a style unique to itself that hasn’t been seen in a recent title. Radiata walks the line between a pure parody, like The Bard’s Tale, and being a serious title, lending it an air all its own. Jack Russell’s not your standard RPG protagonist. He’s not suave. He’s not smart. He doesn’t have wacky hair. No, Jack’s pretty dumb, and only got into the Radiata Knights because his dad was a famous knight. Jack joins the Rose Cochon Brigade in the Radiata Knights with Ridley Silverlake, a haughty noble, and Ganz Rothchild, the bumbling son of one of Jack’s father’s friends. Things go wrong for Ganz and Jack after a mission to the elf lands, and Jack finds himself out of the Knights and into Theater Vancoor, the warrior guild. A war breaks out between the fairy people and the human people, and Jack must choose sides to save the world.

The story is rote, although the dialogue is what makes it stand out. Jack’s not the sharpest pencil in the drawer, but he is headstrong and honor-bound. His attempts to be the best knight he can be are quite funny and can be much more entertaining than a generic main character’s story. The characters’ story dialogue is voice acted, and much like the vibe in the game, is not the most serious voice acting out there. However, the voice acting completely fits the game and is not ‘bad’ voice acting like, say, the first Grandia game. Voices do sometimes get annoying during battle, as there are only basic sound effects attached to text messages. Also unique to Radiata Stories is the fact that it’s a tri-Ace game with music done by someone other than Motoi Sakuraba. While Sakuraba did contribute a few tracks to the soundtrack, the majority of the game was scored by Lunar composer Noriyuki Iwadare. The soundtrack, much like the voice acting, fits in its prescribed role in the game, but doesn’t sound particularly inspired as a stand-alone OST.

Radiata’s world is one of the most living worlds in recent memory. tri-Ace has provided Radiata with a full time system and characters that follow a schedule. This particular mechanic, while interesting, can make things quite difficult, as you may need to follow NPCs around to catch them in a certain location or have difficulty remembering where Cosmo is supposed to be at 12 AM. Time cannot be controlled with any options – Jack can go take a nap at his house, but he can’t decide to advance time two hours while he’s waiting at the Theater Vancoor. The majority of these characters that you encounter during their day, however, can be recruited into your party. Yes, that’s right, 177 characters are available for Jack to buddy up with, although only a few are focused on in the main story of the game.

The story and gameplay are where things start to diverge. You see, Jack’s story has pacing that’s more similar to Final Fantasy X-2 than Star Ocean: Till the End of Time. Between story missions, players have to take down ranked missions before they advance the story. Although a minimal amount of work is required to take down a mission to advance to the next story sequence, perfectionists will want to take down all the extra missions. Missions can be taken down with a team selected from Jack’s friends list. Jack can bring three of his comrades through the fairy and human lands.

While Mr. Russell travels around the world, he has a tendency to, well, kick stuff. Jack kicks pretty much any object that’s not part of the environment to try and get items. One of the issues in the control comes from the fact that Jack kicks things. Objects are kicked with the X button, but people are spoken to and menus are opened with with the O button. The problem with this is that X is used to confirm an action in a menu, not O. It was quite common for me to cancel a menu because I hit O twice. Because of this, Jack can often unintentionally start fights with some people. Oh, I neglected to mention: you can fight pretty much anyone by kicking them a couple of times. Don’t pick on people that you can’t befriend, though; chances are they’ll beat you to a bloody pulp.

Radiata’s battle system is not nearly as complex as those in previous tri-Ace games. Instead of using Star Ocean’s special attack system, Radiata allows Jack to change the types of attacks and the order in which he can do them. While the attacks are different based on weapons and can be quite strategic outside of battle, it comes down to mashing buttons until the Volty Gauge has been filled up. The Volty Gauge fills by one point each time there is an attack, and can be used in two ways: a special attack that uses ten Volty points or the one-hundred point Volty Break that does a ton of damage.

The combat moves smoothly, as targets can be locked on to, but does move a little slowly compared to Star Ocean 3. Players can’t control any characters directly other than Jack, but have two tools at their disposal. Jack can learn to give orders to his three other party members, telling them to go all out or to conserve their Volty points. He can learn commands for individuals or orders that affect the entire party. Formations can also be called where all four party members jump together and get a bonus to certain statistics based on the formation called. The system is entertaining, but can fall short when more than a few battles come one after another.

The animation in battle is quite impressive, and although the game is technically cel-shaded, it looks nothing like, say, Unlimited SaGa or Dark Cloud 2. The graphics are quite possibly the most impressive portion of the game… except for the battle environments. These environments tend to be expanses of flat, tan dirt. While some environments in the actual game follow stride, many of the environments are extremely pleasing to the eyes. Characters are anime-styled and extremely gorgeous. Although nowhere close to photorealistic, the characters have the same peculiarity as the rest of Radiata. Part of its charm is the fact that based on the equipment they are wearing, characters’ appearances change. Jack might look like a knight trainee at the beginning of the game, but he quickly changes his look to a samurai, or a ranger wearing leather armor. Because the models are done completely, you don’t end up with any of the goofy-looking character models from Lord of the Rings: The Third Age, which had a similar system.

Radiata Stories is a unique game in the role playing genre, but it’s not the best game out there. Much like the rest of tri-Ace’s games, Radiata will certainly form a hardcore cult following, but it might not catch on in the mainstream. There are many unique touches to Radiata that the rest of the role playing genre, or even all games, could learn from, but not everything is executed perfectly. The collectable characters and extra sidequests make Radiata one of the longer RPGs out there… if you like collecting everything. If you’re a guy like me, though, Radiata clocks in at around twenty hours, and another few hours when you complete the other side’s story. If you’re out for a unique title or are a tri-Ace fan, Radiata Stories is right up your alley.