It's amazing how a myriad of small design tweaks and an obviously passionate localization have elevated the game far beyond a second-rate 'Harvest Moon with swords.' 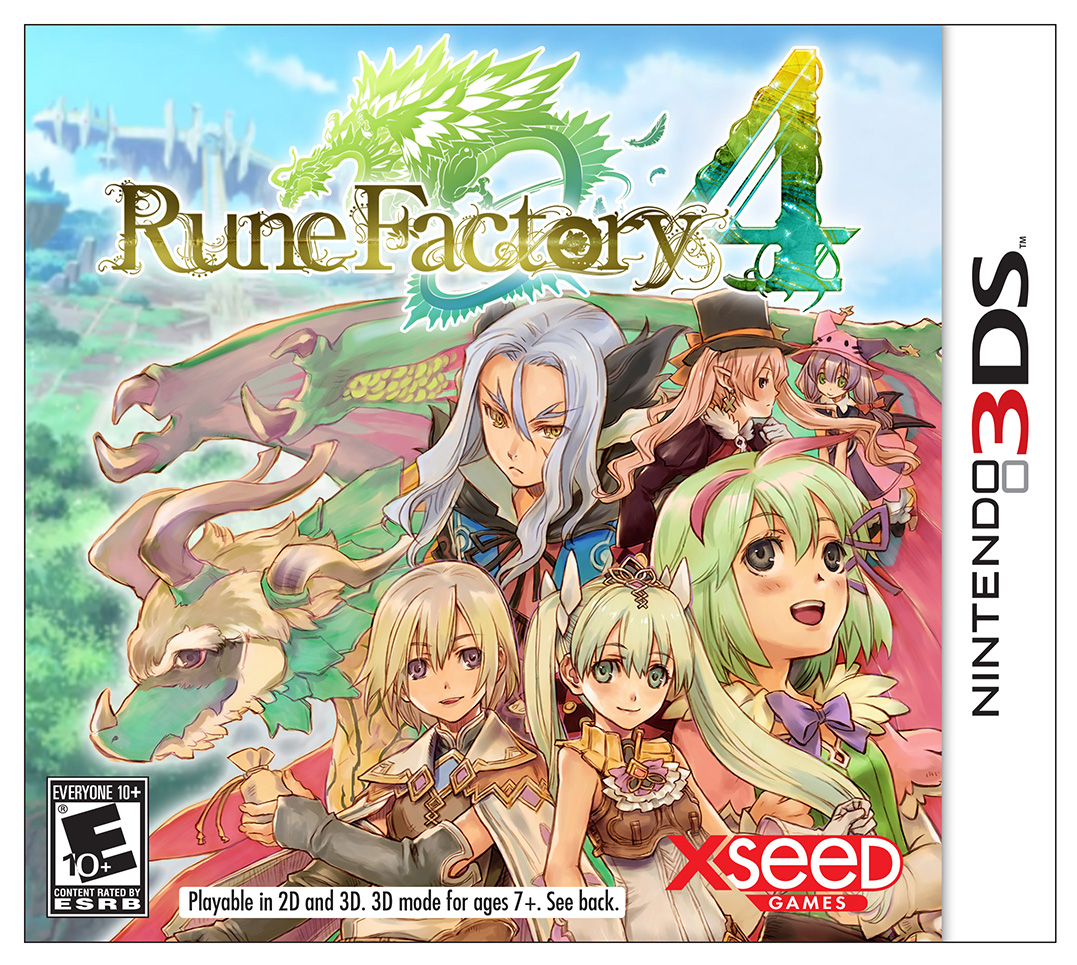 All farming and no fighting makes Jack a dull… no, wait. That analogy doesn’t work, because Harvest Moon is actually a lot of fun. The original addictive farming simulation (we do not speak of Farmville, heathens) used to capture my attention with each new iteration, but recent entries have somewhat stagnated. I thought I would find satisfaction in the added action-RPG elements of the Rune Factory games, but they never quite appealed to me the way Harvest Moon did, and 2011’s disappointing Tides of Destiny convinced me that my connection with the series was never meant to be. With some reluctance, I approached Rune Factory 4, expecting more of the same drudgery… and against all odds, I found it remarkably enjoyable. It’s amazing how a myriad of small design tweaks and an obviously passionate localization have elevated the game far beyond a second-rate “Harvest Moon with swords.”

Rune Factory 4 is set in Selphia, a beautiful land populated by warm-hearted people and protected by the semi-divine Ventuswill, Native Dragon of Wind. When the protagonist falls from an airship and loses her memory, she is assumed to be a princess who was scheduled to arrive in Selphia that very day, and even though this is almost immediately proven false, Ventuswill urges her to live in Selphia Castle and guide the citizens to prosperity. Having no recollection of herself or her original objectives, the young woman agrees and quickly discovers her powers as an Earthmate, enabling her to commune with nature on a level that normal people cannot. Her amnesia, however, obfuscates a mystery that soon comes to light involving the decay of the land and its four Guardians that have kept it in stasis for hundreds of years. While this tale has some surprising moments of gravity, it is juxtaposed with the day-to-day silliness typical of the Rune Factory series, keeping the game’s atmosphere light and cheery. It’s also the longest story to date for the series, with three narrative arcs, each with its own definite ending and credit roll. I can’t say I was ever surprised by or enthralled with the narrative, but it has a certain charm thanks to its quirky characters and flavorful writing.

The player will spend an average day in Selphia tending to crops, raising monsters, chatting with townspeople, and exploring dungeons. Most of these activities may sound mundane, but there’s something addictive about cultivating a vegetable empire and building relationships with earnest townsfolk. Every action in the game, from tilling fields and watering crops to sleeping and bathing, has a skill level that increases with repetition, so there is virtually no way to waste time, because the player is always growing in some way. The game does an excellent job of interlocking content, and gives the player many options for making progress. After growing a crop of vegetables, for instance, the player can cook them into extravagant dishes, and either sell them, give them away as gifts to a potential love interest, or reserve them for healing while exploring dungeons. This relaxing, at-your-own-pace style of gameplay lets the player pursue almost any objective in a non-linear order, although a few features and characters are tied to progression in the story. These limitations are mild, however, making the game easy to get lost in for hours while accomplishing a string of errands.

As a Prince/Princess, the player can make use of a new “order” system to enact a variety of beneficial edicts, which range from holding festivals to obtaining licenses, the latter permitting the construction and operation of crafting tools within the player’s home. Customizing the castle with hand-made furniture is as satisfying as one might imagine, although objects are rendered in a strange, sloppy way that makes them difficult to properly arrange. In addition to ruling the town with an earthy fist, the player can undertake daily requests on the citizens’ behalf. These function as optional quests and do a good job of guiding the player through the game’s features without feeling overbearing. Finally, relationships are an important element; chatting with neighbors and giving them gifts suited to their tastes allows the player to invite them on adventures, and some characters can even be asked on dates, which culminate in marriage and the birth of a child. This feature isn’t new to Rune Factory, but this is the first time the player can choose between a male and female protagonist, so the number of marriageable candidates has effectively doubled. (TsunDylas or bust, by the way.)

One thing that Rune Factory 4 excels at is not wasting the player’s time. Movement is speedy, text scrolls quickly, animations are fast, and travel is incredibly convenient thanks to teleportation magic and, later on, an airship. The game also makes the best of a rather complicated menu system with several button shortcuts and touch screen functionality for accessing item storage, spells, maps, and more. Since much of the player’s time is spent switching between tools and moving items around, I appreciate that this process is simplified as much as possible. Combat is similarly fast-paced, and the animations aren’t as stiff as they were in previous games, but a lithe warrior the Earthmate is not. There are six weapon types (spear, short sword, long sword, dual swords, hammer, fists), but each is limited to a short combo, with a single charge attack and, eventually, an “ultimate” attack at the end of the combo to add a small amount of depth. It’s plain that combat is more of a side activity than the game’s primary focus.

The game also looks pretty good despite its emphasis on speed, with colorful backgrounds, expressive character portraits, and a solid framerate. There’s also a pleasant anime opening, as well as brief animated cutscenes that play whenever the player meets a major character. The jump to the 3DS has easily made this the best-looking Rune Factory game yet. I can’t lavish as much praise on the soundtrack, which doesn’t have many memorable tunes outside of the opening theme and town theme. The character voices, on the other hand, are absolutely spot-on, although lines are voiced with disappointing infrequency, aside from passing greetings. The fact that I wanted to hear more should be a testament to how fitting the voices are. Suuuuper good morning to you too, Porcoline.

Rune Factory 4 is a game I did not expect to like as much as I did, proving that it’s nice to be wrong about things from time to time. Its addictive blend of farming, fighting, and friend-ing makes for a fun, lighthearted experience that’s easy to get lost in for hours at a time. The series has never been this polished and accessible, so even if you weren’t in love with earlier titles, Rune Factory 4 is still worth a look. Evidently, it’s never too late to teach an old Wooly new tricks.

Non-linear gameplay with tons of objectives, fun characters and writing, speed and convenience are prioritized, longest story in the series.

Object graphics can feel low-budget, not a lot of memorable music, slightly overwhelming at first.

The best Rune Factory game by a long shot.