You could believe Yasumi Matsuno and his team had put this together if not for the Koei logo up front. While genuinely easier than either FFT or its cousin series Tactics Ogre, it's a highly competent take on the genre.

Hail fair wanderer! Step into the world of Chinese mythology, as brought to you by Japan. Saiyuki is based off the mid-16th century Ming novel Journey to the West, originally a folk story in which four companions (a monk and his three demihuman wards) must travel to India to retrieve the core Buddhist scriptures or Tripitaka in order to furnish China with a better understanding of its tenets. Being a Koei joint marketed to a teenage audience, Saiyuki is necessarily a fusion of classical and modern aesthetics, with embellishments from other myths such as the Fengshen Yangyi, known to English speakers as Investiture of the Gods.

The game will immediately remind players of Final Fantasy Tactics, the seminal strategy RPG that has given isometric tactical games a place of high esteem amongst PlayStation aficionados. You control a party of 4-6 members and move your 2D sprites around a 3D landscape (viewed from three-quarters overhead) divided into squares. If you haven’t played a strategy RPG of this kind before, think of it like an advanced form of chess. This is by no means Koei’s first rodeo when it comes to tactical games (they practically invented the simulation style with their Romance of the Three Kingdoms series), but it’s refreshingly different from their typical fare. Character-centric and based around small engagements, it may not be what a Koei traditionalist is looking for with their penchant for sprawling imperial politics and field mechanics, but for me it’s a much more consumable experience.

Saiyuki is a delayed North American release, coming out three years after its 1999 Japanese debut. As a result, it has some visual artifacts from a much earlier period of PlayStation development. Although the sprites are nice, the animated cutscenes and artwork fantastic, and the overall aesthetic quite well executed, you’ll notice visual oddities that were common during early PlayStation games, but have long since been solved for such as blockiness in sprite scaling and warped textures on 3D objects. The blockiness is especially noticible with the “wereform” transformations of your party, where they Hulk out into giant monster versions of themselves. It’s no worse than what one would find in Xenogears or Vandal Hearts, but it can be a bit of a sore note amidst the otherwise gorgeous sprite work. Portraits (and the game’s key artwork in general) is the work of Akihiro Yamada, who Front Mission fans will recognize for his contributions to that series. 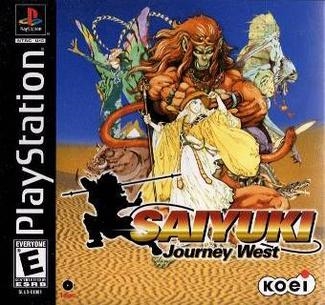 Despite the small annoyances, most players will probably enjoy Saiyuki’s look. The best parts, like with most PlayStation RPGs, are in the introduction and cutscenes. The animation is full of vibrant colour and motion, with a style reminiscent of other mid-to-late 90s properties like Yu Yu Hakusho, Hoshin Engi (also based on Chinese myth!), and Fushigi Yuugi. It has some high-quality production value, detailed and fluidly animated, and is something I’d genuinely like to see as a TV series or OVA.

The spell effects are one of the places the game’s visuals sag a bit. There’s a variety of excellent pieces here, with beautiful transparencies and lovingly detailed artwork for the summons, but others like standard spells can quite bland and repetitive. If you’re like me and don’t want to sit through the full casting sequence every time, you can turn them off via the options or choose to view them only on first casting and never again afterward. It’s a kindness the Final Fantasy franchise still hasn’t granted us as of this writing.

Most of the music is extremely well done, capturing the traditional feel of ancient Chinese myths and high adventure. There is, however, one glaring exception to this, and that’s the North American intro piece. While Japan got an inspiration power ballad that complements the animation, North American audiences got “Magic SonGoku” repeated over, and over, and over. It’s not even the same song, compositionally, and the decision is just mind-boggling considering the song is actually in Japanese.

Otherwise the musical score does well, ranging from upbeat battle themes to romantic and leisurely scene pieces, mixing modern and classical instruments to enhance the game’s aesthetic. It’s rounded out with effects audio that I would describe as “generally competent”, with satisfying effects from weapon blows and spell effects, though the Wereform sequences can be grating due to prolonged noises in a high pitch. It’s one more reason to turn them off.

The game’s engine looks surprisingly similar to Final Fantasy Tactics. You could believe Yasumi Matsuno and his team had put this together if not for the Koei logo up front. While genuinely easier than either FFT or its cousin series Tactics Ogre, it’s a highly competent take on the genre. It uses similar camera controls, movement patterns, and modes of engagement, with a few of its own ideas thrown in for good measure. As I’ve mentioned previously, “wereform” transformations are a key special power of most of your party members, but so are Guardian summons that grant Sanzo their abilities, becoming temporary assets across a few rounds of battle. It also features an elemental countering system based on the five traditional elements of China: Earth, Water, Fire, Metal, and Wood (here called “Nature”). Earth defeats Water, Water defeats Fire, Fire defeats Metal, Metal defeats Nature, Nature defeats Earth. Keeping this in mind is key when setting up for elemental attacks, as you can either take advantage of an enemy’s weakness or fall victim to a spell in your blind spot.

In a move that’s surprising (and welcome!), Saiyuki lets you choose between being a male or female version of the main character at the beginning of the game. Said character is the semi-historical figure Sanzo Genjo. The swap doesn’t affect much of anything beyond your portrait and how other characters refer to you, but in a market where games rarely let you choose anything about your protagonists — even the silent ones — it’s a nice touch.

The game follows the general plot of Journey to the West with deviations as appropriate. You take control of Sanzo and their companions, starting with the traditional figures of Goku, Gojyo, and Hakkai — the Monkey, Ogre, and Pig. In the original novel they symbolize Sanzo’s three major assets, the mind, emotions, and body, and Sanzo must teach them to work in harmony to complete his mission. Here, Saiyuki brings in more cast members and eschews the greater philosophical message, but what it lacks in direct meaning, it makes up for in fun character interactions. You’ll run into river dragons, fight transforming demon hordes, and challenge a bevy of supernatural beings drawn from across Chinese, Indian,  and Japanese mythology. Persona and Shin Megami Tensei fans will probably get a kick out of the various bosses drawn from Indian mythology, and some of the Asiatic horror visuals that accompany them. It’s an entertaining time throughout, even if it never quite hits any philosophical depths or big themes.

Overall, it’s easy to recommend Saiyuki: Journey West. Despite the hilariously bad intro music and a bit of age showing in the graphics, it’s a smooth play with a less-typical story to enjoy.

A fun adventure with lovable characters and an engaging battle system. Fantastic animation in the cutscenes and slick artwork throughout.

A terribad intro song and some poorly-aging graphical flaws. Not the most challenging playthrough.

A solid SRPG for people who want more Final Fantasy Tactics in their lives. Very appealing for fans of Journey to the West and other forms of Chinese mythology.