The World War I-era setting with its splash of blood and horror, the backdrop of mysticism and magic, and the excellently designed aesthetics make for an alluring and richly textured experience unlike any that came before. 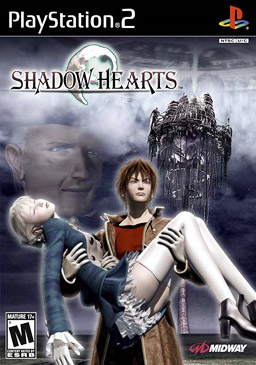 In the midst of today’s struggling JRPGs, it took the replaying of a classic to remind me of something many have forgotten. Ten years after its release, Shadow Hearts proved that my love of the JRPG was not just a stage in my video game life that had given away as adolescence does to adulthood. My enjoyment of this beloved and frustrating genre was not to be found only in the past, although today’s JRPGs often lack essential elements somehow forgotten in new trends and methods. Shadow Hearts may be unpolished and critically mediocred into obscurity, but this delight offers more entertainment and joy than even the most acknowledged and flashy JRPGs of today.

The World War I-era setting with its splash of blood and horror, the backdrop of mysticism and magic, and the excellently designed aesthetics make for an alluring and richly textured experience unlike any that came before. The game takes care to cultivate a unique and unsettling RPG atmosphere, using the tools of the trade to full effect. The year is 1913, and a priest has just been murdered in the small town of Rouen, France. His body was torn to shreds – as if by animals – in front of his daughter. The story begins a month later, immediately plunging into the murky depths of dark magic and the power-hungry magi that wield such powers. The atmosphere that surrounds this tale is what Shadow Hearts does best and what makes it perpetually playable.

Shadow Hearts does a fairly good job of refreshing the save-the-world tale it shares with so many of its brethren. The hackneyed premise weakens the plot, but the setting and horror-laden atmosphere more than make up for it. A few twists make their way into the story, and the main source of villainy shifts halfway through the game, which restores vitality to the plot at the point when it needs it the most. The story also becomes complex enough to hold the player’s interest until the end. Unfortunately, the horror and mysticism inherent in Shadow Hearts aren’t quite taken to their full potential, probably due in large part to the spotty localization. This not only hampers plot nuance, but also characterization. Fortunately, the game’s humor and perversity shows through regardless (along with some slight and regrettable homophobia).

Despite the occasional failings of the localization, Shadow Hearts still features a memorable and relatively unique cast of characters. Our major heroes are Yuri, who can mutate into monsters, and Alice, a powerful exorcist with holy powers. They are the central characters from the start, and as such, they receive the most attention on screen. Their conflicts are entwined from start to finish – the dark and the light – and drive a good portion of the emotional impact of the plot. The Yuri-Alice story can be effective at times, but Alice could have been more likeable. Yuri, however, is a lovable guy, although he occasionally fits into the I’m-dumb-let’s-fight-not-talk stereotype. Thankfully, he isn’t afraid to show emotion and accept weakness, and he completes a character arc more fully than most JRPG protagonists.

Other characters are entertaining, but never fully developed. Characters introduced late in the game receive much less attention than others. Nevertheless, each is unique and at least not superficially archetypical. In addition, the game forces the player to use every character in turn, which not only has gameplay consequences, but ensures that one attaches some sort of emotion to each character. Regrettably, the game’s major villains are a bit unmotivated for their goals. After all, even crazy people need a pretty good reason to pine for the world’s destruction. Once again, however, Shadow Hearts manages to freshen up the typical with the gentlemanly villain Roger Bacon. Properly motivated or not, who can forget him?.

Overall, the plot and characterizations are unpolished and somewhat stained with JRPG melodrama, but offer enough individuality and genuine drama to make the story watchable. The atmosphere and setting make Shadow Hearts doubly playable, but a proper localization may have made it even more unforgettable. The dialogue is at least always entertaining, however, even if it doesn’t make sense.

Turn-based battles can be boring. Many lack variety, strategy, depth, and a quick pace. Shadow Hearts instantly remedies these common maladies with a single delicious elixir: the Judgment Ring. Every action except full defense requires the player to try his skill at the Ring. A bar swings around a ring, and the player must tap X when it crosses highlighted areas. Careful timing yields more powerful attacks, abilities, and items. Carelessness immediately botches an attack or item, rendering the turn wasted. The Ring ensures battles remain fresh and engaging from beginning to end without exception. There’s no lying back and mashing the X button here. Such a thing would summon the reaper rather quickly, partially thanks to the game’s formidable, but balanced difficulty level. Normal battles are rather easy and don’t require much strategy, but bosses are tough and frightening. Even when lack of challenge puts strategy to rest, however, the Judgment Ring keeps battles engaging.

Every character has special abilities of a certain flavor, but none are as developed as Yuri’s. His fusion is not some tacked-on special ability or gimmick either. Yuri’s fusion and the acquisition of new fusions ties in directly with the story and themes, while at the same time providing a neat game mechanic. New fusion monsters require the player to face them in battle after collecting enough spirit energy through combat. Unfortunately, the fusions aren’t quite as useful as they could be. Random encounters are typically easy enough to finish without fusing, and bosses are typically best defeated by physical attacks. This makes only one of Yuri’s fusions useful at any given time: the one with the highest attack power. In addition, fighting fusion monsters is not nearly as exciting as it should be, since most of them are almost identical. It’s a cool addition nonetheless, and something to add nuance and augment the already substantial atmosphere.

Yuri’s fusion ability isn’t the only thing that adds to the game’s unique vision. As players defeat enemies, Malice builds up, and Yuri must defeat a monster when too much has accumulated, or else fight Death itself. Sanity Points measure how well characters can handle the horrors of combat, making it somewhat more realistic while also adding more strategy. Everything in Shadow Hearts contributes to the themes and feel of the game, making it one of the most cohesive JRPGs around. Its polish is always patchy, however, and some of the rougher interior shows through occasionally in mechanics that aren’t quite perfect and abilities that aren’t quite balanced.

Shadow Hearts also features some of the best optional content ever. Hidden items and ultimate weapons and armor sometimes come accompanied by cutscenes that flesh out characters and describe things any invested player wants to know. Important and poignant details such as the birth of Yuri’s abilities come in the form of optional cutscenes. Not only that, but there are three optional dungeons, and these aren’t of the cheap pallet-swapped variety seen so often today. They come equipped with unique graphics, puzzles, monsters, and bosses. This sort of detail makes Shadow Hearts timelessly special. Some of the game’s best optional content – including the “good” (although not canon) ending – is easy to miss, however. An unfortunate design flaw made even worse by a NewGame+ option that doesn’t carry over levels or fusion monsters.

The aesthetics mentioned above darken the mood and help create that unforgettable Shadow Hearts feel. While the graphics haven’t aged well and never achieved the same level of quality demonstrated by other RPGs of the time, the art design more than compensates. Enemy design in particular obliterates the competition while showcasing the series’ trademark horror. Not only that, but Shadow Hearts also challenges the Shin Megami Tensei franchise for creepiest phallus-bearing monster.

Shadow Hearts’ music offers a stunningly original and effective sound and a perfect backdrop to the action onscreen. Startling background vocals and unsettling synth sounds lurk in dungeons and battles. There are also multiple battle and boss themes to keep things sounding fresh and creepy. The soundtrack demonstrates immense versatility as well, creating some of the best town themes and one of the most infectious post-battle themes ever. This is one of the most effective and memorable RPG soundtracks ever recorded. The voice acting may be just as historically memorable, but for entirely different reasons. This is another aspect that shows how primitive the game can be. If you haven’t heard the Sea Mother’s groans, shloops, and screes yet, do so now.

Shadow Hearts is proof that JRPGs really can be special and offer something Western RPGs cannot. Turn-based battles can be special as well and offer something other than boredom and tedium. Despite Shadow Hearts’ horror overtones, the game displays great heart and remains one of the most easily adored RPGs in history. Even the elements that don’t work in Shadow Hearts add to the atmosphere and create a cohesive package with great individuality. The lost potential and rougher edges demanded an even better RPG, and that was delivered three years later in Shadow Hearts: Covenant.

Shadow Hearts is an unpolished yet loveable example of the alluring JRPGs of yesteryear that make our memories comforting and our nostalgia keen.