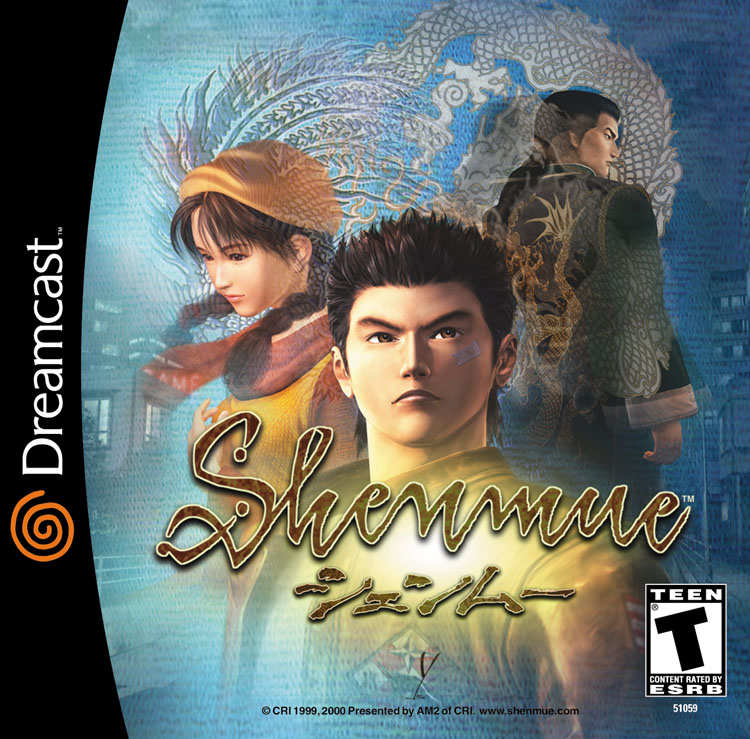 Shenmue was heralded as Yu Suzuki’s magnum opus, his grand achievement, and a testament to his amazing game creation ability. Unfortunately, it seems as though he got too carried away with realism, and somehow forgot that everyday real life isn’t always fun.

Shenmue’s plot revolves around Ryo Hazuki, who comes home one day and witnesses the murder of his father by a mysterious Chinese man named Lan Di. For the rest of the game, Ryo basically wanders around 1986 Japan and tries to find links as to who this man is, why he murdered his father, and where he can find him to have his revenge.

It doesn’t sound too interesting and it never gets very interesting because even at the end of the game, the plot isn’t resolved, since Shenmue will have sequels continuing the story. I find that argument unacceptable; after putting in hours of work, I got an ending that made Legacy of Kain: Soul Reaver’s look good (considering it was a better playing game). The plot never takes off the ground and it seems Mr. Suzuki thought gamers would rather have a billion “mini-games” rather than real plot progression or gameplay. All in all, a poor plot with no real climax.

There are literally hundreds of characters to interact with in Shenmue, but they really don’t do anything interesting. There is somewhat of a love story between Ryo and a woman, but that is poorly executed and doesn’t really add anything to the plot. Ryo himself looks awesome in design, as do most of the game’s characters, it’s just that he’s a bore. It might be the lines, maybe it’s the poor voice acting, but he seems like a robot, even when he has some “emotional” scenes.

Interaction with characters in the towns is nil because they usually only say one or two things over and over again or Ryo automatically asks them something. They’re not terrible but there are plenty of other RPG’s that offer more in the ways of character development and personality.

The music is one of Shenmue’s high points. The score is magnificent, whether it is the quiet, soothing feel of the town themes or the intense orchestra of battle scenes. The jazz songs to some of the clubs prove to be some of the best pieces in the game, and the sound quality for every piece is excellent; it’s clear, crisp, and fits each part of Shenmue perfectly.

The downside is the horrible voice acting. I am simply stunned as to why more effort was not put into the voice acting, considering there is so much of it in the game. Sure, there are many, many different voices and each character speaks, but it sounds like it was recorded in an alley with paper bags over the voice actors’ heads. It crackles and sounds very low-quality, as if in 22KHz rather than standard 44KHz recording.

It also doesn’t help when the voice actors are terrible; Ryo sounds like a robot, lines are exaggerated, people sound half-alive, etc. They simply don’t sound like real people for the most part. I will say there were a few good showings here or there, but there was nothing memorable and this was a big let down for me. This is simply unacceptable, and it drags the score down.

Gameplay is where Shenmue ultimately fails: it is basically non-existent and boring for the most part. Ryo is controlled through the areas and for most of the game he is just going from one person to another, gathering clues about his father’s murder. Not until later in the game (Disc 2) do intense battle scenes occur, and even they are executed horribly.

Aside from the bore that is wandering through towns, Ryo can enter QTE or Free-battle modes when attacked. QTE mode is much like Die Hard Arcade, in which the gamer has to press the button that appears onscreen quickly to attack or avoid an attack. The idea is cool, but it rarely happens until later in the game.

Free-battle mode is basically a fighting mode, in which Ryo can kick, punch, and do special moves. It wouldn’t be bad if the control was good; Ryo moves too jerkily and like a sloth, and the battle system is very repetitive. Special moves are useless since they require odd button combinations and they take too long to execute; you’ll just be hammering on the buttons, punching and kicking. It’s like a poor Tekken fighting clone.

The mini-games are fun for the first hour, but they become very tedious after that; it’s fun to see Space Harrier and Super Hang-On in the arcade, but when there are only four games it’s not fun after the tenth time. As I stated earlier, it seems Yu Suzuki forgot that real life isn’t always interesting. It seems more like he wanted to wow us with Shenmue’s magnificent graphics. Watching Ryo drink Jet Cola in a 20 second animation is not my idea of entertainment, Mr. Suzuki.

The graphics in Shenmue are simply stunning. Never before have I seen character models of such detail and figure. Characters have life-like movements and detailed facial expressions.

The completely polygonal world is amazing and almost real; so real that the game made me want to visit Japan right away, to marvel in the small, cozy towns Ryo visits. The towns are huge and look magnificent, with close attention to detail. While anti-aliasing would have helped eliminate the jagged edges that become more and more obvious, that’s not enough to take away from the graphical milestone that is Shenmue. At least the boys at Sega did one thing right.

The dialogue in Shenmue isn’t bad; it’s the voice actors who deliver bad lines. The localization went well, considering the game takes place in Japan. I have one gripe, and that is that most of the banners and signs are in Japanese, and you have to get close to get an English subtitle, which can become very annoying. Other than that, the text is fine and is true to the Japanese. However, decent voice actors would have improved this game tenfold.

The control in Shenmue is somewhat awkward; the digital pad controls Ryo’s movements, and the analog stick controls the camera. I personally feel it should have been the other way around, but Sega should have at least included a custom controller mode.

Shenmue isn’t relatively long; I completed the game in about 20 hours, if not less. I remember hearing that Shenmue could be endless, but I can’t see how anyone could enjoy the mini-games for that long. In almost every way, Shenmue is a disappointment, and I can only hope they get it right with Shenmue 2.